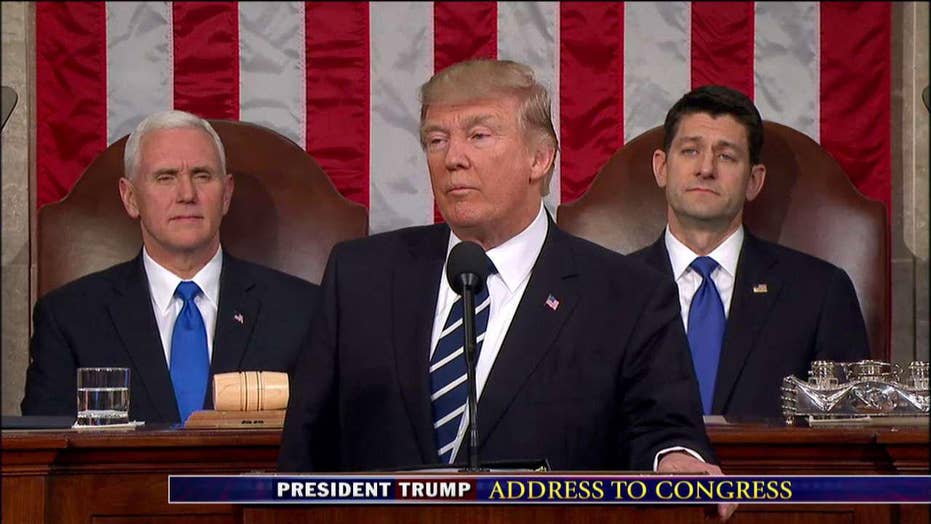 Trump: We must restore rule of law at our borders

President challenges lawmakers who 'don't believe we should enforce our laws'

President Donald Trump restated his case for tougher immigration rules and a wall along the U.S.-Mexico border in his speech to a joint session of Congress Tuesday night, saying Americans cannot succeed "in an environment of lawless chaos."

The president vowed that the border wall "will be started ahead of schedule" and would be "a very effective weapon against drugs and crime" when finished.

Trump's vow to construct a wall across America's southern border was one of the most controversial planks in his campaign platform. On Tuesday, he attempted to turn the issue around in a rhetorical question to lawmakers.

"What would you say," Trump asked, "to the American family that loses their jobs, their income, or a loved one, because America refused to uphold its laws and defend its borders?"

Trump also defended new guidelines from the Department of Homeland Security that would subject any immigrant in the country illegally to deportation if they are charged or convicted of any offense, or even suspected of a crime.

"As we speak tonight," Trump said, "we are removing gang members, drug dealers and criminals that threaten our communities and prey on our very innocent citizens.

"Bad ones are going out as I speak," Trump added, "and as I promised throughout the campaign."

Trump told Congress that he believed "real and positive immigration reform is possible," hours after he told news anchors that "the time is right" for such a bill "as long as there is compromise on both sides."

The president did call for a change in the U.S. immigration admission system, advocating a move to a "merit-based" model similar to those used by countries like Australia.

"It is a basic principle that those seeking to enter a country ought to be able to support themselves financially," Trump said. "Yet, in America, we do not enforce this rule, straining the very public resources that our poorest citizens rely upon."

Trump argued that the switch to a merit-based system would "save countless dollars, raise workers' wages, and help struggling families — including immigrant families — enter the middle class."