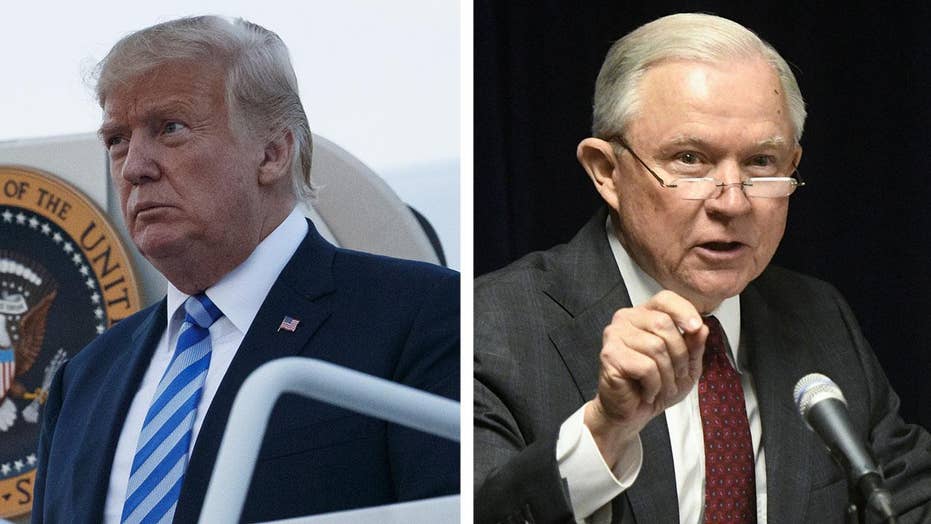 Calling opioids coming into the U.S. from China and Mexico "almost a form of warfare," President Trump on Thursday urged Attorney General Jeff Sessions to investigate foreign sources of fentanyl that he said are "killing our people."

Speaking during a Cabinet meeting Thursday, Trump also took the unusual step of urging Sessions to file a "major" new lawsuit against opioid suppliers and manufacturers, rather than join existing lawsuits filed by states affected by the spread of the highly addictive, deadly drugs.

“It’s almost a form of warfare,” Trump said, referring to the drugs he called "garbage" that are flowing into the country. "I’d be very firm on that. It’s a disgrace and we can stop it.”

Trump added: "I'd also like to ask you to bring a major lawsuit against the drug companies on opioids. Some states have done it, but I'd like a lawsuit to be brought against these companies that are really sending opioids at a level that -- it really shouldn't be happening. ... People go into a hospital with a broken arm, they come out, they're a drug addict."

More than 1,000 lawsuits by more than a dozen states have already been filed nationwide against distributors and manufacturers in recent months amid the opioid epidemic.

Earlier this week, New York sued the maker of the prescription opioid painkiller OxyContin, saying Purdue Pharma has misled both patients and doctors about the dangers of their drug.

In June, Massachusetts also sued Purdue and its executives, accusing the company of fueling the deadly drug abuse crisis by spinning a “web of illegal deceit” to boost profits.

The lawsuit, which the state's attorney general said was the first to call out the names of company executives in connection with opioid deaths, came as Purdue was already defending against lawsuits from several other states and local governments.

Other companies involved in litigation with states include manufacturers Johnson & Johnson and Teva Pharmaceuticals, as well as distributors. The suits generally involve claims that the drug makers have improperly downplayed the addictive qualities of their drugs, and that distributors have negligently handled their shipments.

Sessions said he would comply with the president's requests.

"We absolutely will," Sessions said Thursday. "We are returning indictments now against distributors from China; we've identified certain companies that are moving drugs from China, fentanyl in particular. We have confronted China about it ... Most of it is going to Mexico and then crossing the border, unlawfully, from Mexico."

There were no signs of tension in the room, even though the attorney general has been a target of Trump's ire in recent days. On Saturday, Trump called Sessions "scared stiff and missing in action," amid his ongoing frustration with the Russia probe and related inquiries.

HOW TO SAVE SOMEONE FROM AN OPIOID OVERDOSE

"In China, you have some pretty big companies sending that garbage and killing our people."

Last October, the White House declared the opioid epidemic a public health emergency, and the Trump administration has since taken steps to combat the national problem.

Trump's plan, which he discussed in March, includes harsher penalties for drug traffickers and lowering the amount of drugs needed to trigger mandatory minimum sentences for dealers. The president specifically asked the DOJ to pursue more death penalty cases against drug traffickers, and also pushed for more federal support for medications that can reverse the effects of opioid overdoses.

Last year, Trump reportedly praised Philippine President Rodrigo Duterte for his government's violent crackdown on drug users, saying he has done an "unbelievable job on the drug problem." Human Rights organizations have reported that more than 10,000 people have been killed as part of the Duterte's efforts to halt the spread of lethal narcotics in the country, which observers say has proceeded without regard for due process rights.

The Center for Disease Control and Prevention (CDC) estimates that 115 Americans die daily from opioid-involved deaths. Opioids, including prescriptions and heroin, killed 42,000 people in the U.S. in 2016.

Overall drug overdose deaths in 2017 increased to 72,000, up nearly 6,000 from 2016. Preliminary data from 2018, however, suggested that the numbers may be trending downward in the wake of the Trump administration's efforts to curb the epidemic.