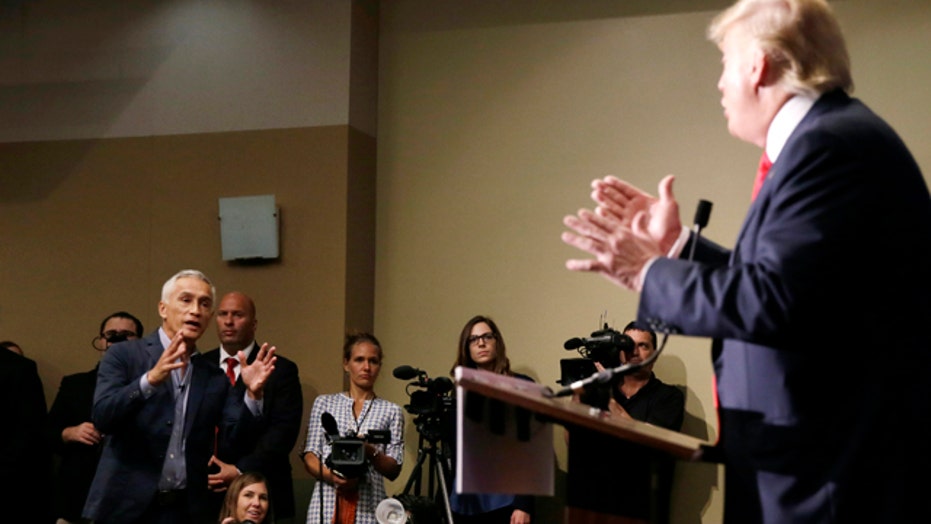 Was Jorge Ramos out of line?

NASHVILLE, Tenn. – Donald Trump will decide soon whether to mount a third party bid if he loses the Republican nomination for president, the real estate mogul said Saturday.

"I think over the next couple of weeks you're going to see some things that are very interesting," Trump said after a speech in Nashville to a gathering of tea party activists.

"We're going to make a decision very soon," he added, "and I think a lot of people are going to be very happy."

Trump has so far refused to pledge to support the eventual Republican nominee, saying his refusal to commit gains him leverage over the party establishment, which has been caught off-guard by his early dominance in the race. He's also said repeatedly that he'd prefer to run as a Republican as long as the party treats him fairly.

But to appear on the ballot in South Carolina and several other states, he'll have to pledge to support the eventual nominee.

Trump was in Nashville to court tea party-leaning voters at a conference hosted by the National Federation of Republican Assemblies, which describes itself as "a grassroots movement to take back the Republican Party for the vast and disenfranchised majority of its members."

With more than a year before the presidential election, Trump has been leading summertime polls. Many of his supporters' sentiments align with those that fueled the tea party's rise. Trump made clear Saturday that he welcomes tea party support.

"I love the tea party!" he told the crowd during a meandering, hourlong speech at a Christian music venue and skateboard park, making the case that they hadn't been treated fairly.

"The tea party people are incredible people. These are people that work hard and they love the country and then they get just beat up all the time by the media," he added. "You don't know the power that you have."

The event came the day after Trump held a glitzy $100-per-person campaign event -- which he repeatedly insisted wasn't a fundraiser -- outside of Boston.

Trump said the money raised was only to offset the costs of the event and said people attending could choose to pay whatever they wanted.

But multiple signs posted at the property's entrance and along a staffed check-in table told those arriving to "Please have cash ready or make checks payable to: Donald J. Trump for President, Inc." Another read, "Entry Fee $100 Per Person."

On Saturday, Trump expressed frustration that coverage of Friday's event focused on the discrepancy.

"I got so angry at my people because somebody put up a sign saying $100," he said.

Trump also defended a personal attack he launched Friday against Huma Abedin, a top aide to Democratic front-runner Hillary Rodham Clinton, who has been swept up in the controversy over Clinton's use of a private email server while she was secretary of state.

Trump again speculated that Abedin had shared classified information with her husband, former Congressman Anthony Weiner, who resigned after sending sexually explicit images of himself to women he'd met online.

A spokesman for Clinton's campaign did not immediately respond to a request for comment, but said in an emailed statement Friday that there "is no place for patently false, personal attacks towards a staff member" and that Trump "should be ashamed of himself."