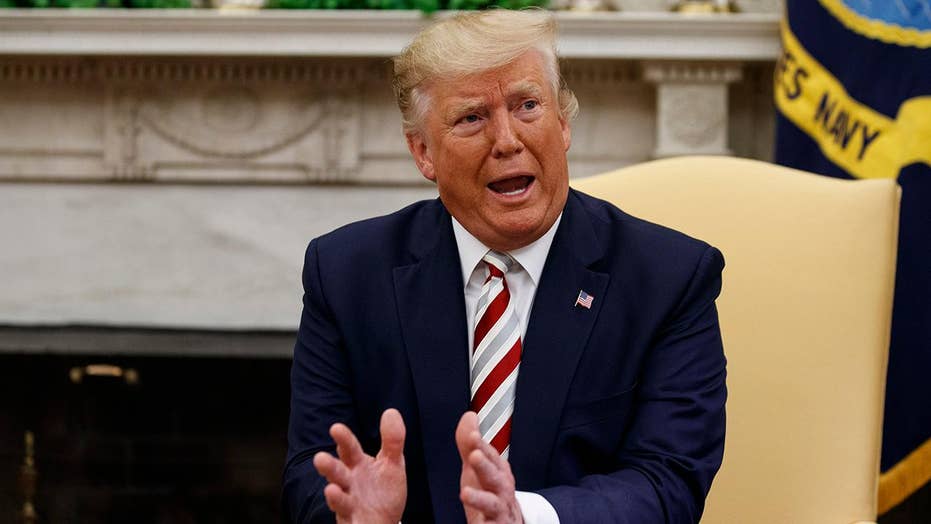 Trump tweets that the decision was based on Mette Frederiksen's indication that she has no interest discussing the purchase of Greenland.

President Trump on Tuesday abruptly canceled a planned meeting with Danish Prime Minister Mette Frederiksen, saying there was no point to the trip after Frederiksen called the idea that the U.S. might buy Greenland from Denmark "absurd" -- and insisted there would be no Copen-haggling about it.

Trump had been expected to visit Denmark on Sept. 2-3 as part of his trip to Europe, but until his tweets Tuesday, there were no solid indications the visit to Denmark was centered on buying Greenland.

Commentators immediately reacted with surprise, saying they were under the impression the visit to Denmark would involve other topics of conversation.

"Breaking my vacation Twitter hiatus to say that I am amazed the purpose of the Denmark trip was actually to purchase Greenland," wrote Washington Post reporter Seung Min Kim.

The Wall Street Journal first reported last week Trump was interested in buying Greenland, a semi-autonomous territory under Danish control with a population of approximately 56,000.

According to the paper, Trump asked his advisers about acquiring the island during “meetings, dinners and passing conversations” because of Greenland's “abundant resources and geopolitical importance.”

In this photo taken late Friday, Aug. 16, 2019, homes are illuminated after the sunset in Tasiilaq, Greenland. (AP Photo/Felipe Dana)

The U.S. made a somewhat similar effort to buy Greenland in 1947, albeit without the razzle-dazzle of social media.

The idea led some left-wing commentators to mock the White House, but most found humor in the moment -- and, in something of a fourth-wall-breaking moment, Trump himself appeared to join in on Monday, tweeting a meme originally credited to Ricochet editor-in-chief Jon Gabriel.

The meme depicted a lavish Trump skyscraper looming over a mostly empty village in Greenland.

The president captioned the image, "I promise not to do this to Greenland!"

But, Greenland is not on the market in any event, Frederiksen said.

"Greenland is not Danish. Greenland is Greenlandic. I persistently hope that this is not something that is seriously meant," Frederiksen told reporters Sunday during a trip to meet Kim Kielsen, the premier of Greenland

Speaking to reporters in New Jersey this past Sunday, Trump compared the proposal to "a large real estate deal."

At the same time, Trump said buying Greenland was not a top priority for him or his administration.