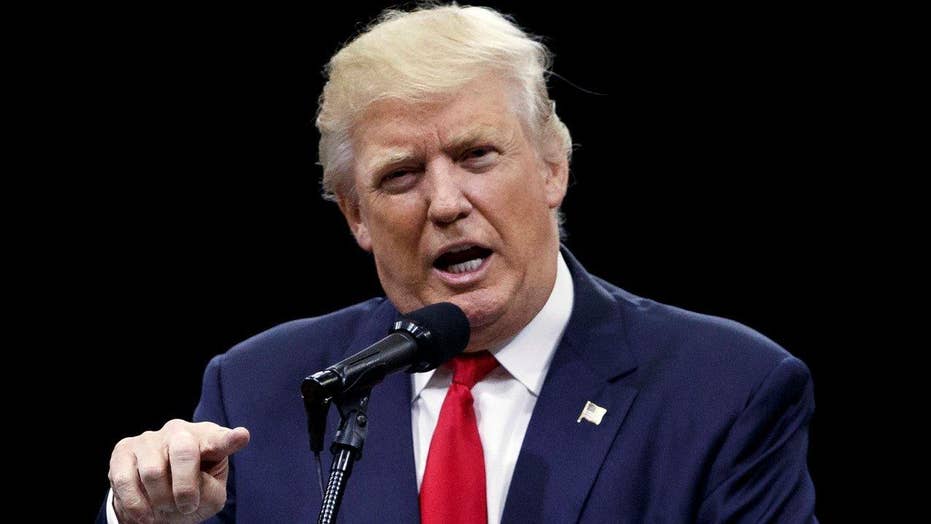 Trump: Sanders 'made a deal with the devil'

Donald Trump is rapidly ratcheting up the rhetoric as the 2016 candidates charge out of their respective party conventions, warning Monday the November presidential election could be “rigged” and repeatedly calling Democratic rival Hillary Clinton “the devil” – while his campaign tried to draw financial links between the Clinton Foundation and ISIS.

“She lied over the weekend,” Trump said, citing her widely challenged claim to “Fox News Sunday” that the FBI director determined her statements on her personal email use were “truthful.”

The onslaught of accusations – signaling a new and tougher phase in a campaign already characterized by sharp elbows and name-calling – picked up late Monday, as Trump railed against his general election rival during stops in Ohio and later Pennsylvania, and in media interviews. He went so far as to suggest November could be fixed.

"I'm afraid the election is going to be rigged, I have to be honest," the Republican nominee told a town hall crowd in Columbus, Ohio, on Monday. He added that he has been hearing "more and more" that the election may not be contested fairly, though he did not elaborate further.

Trump made the claim after first suggesting that the Democrats had fixed their primary system so Clinton could defeat Sen. Bernie Sanders.

He repeated the charge Monday night on Fox News Channel's "Hannity," saying: "November 8th, we'd better be careful, because that election is going to be rigged. And I hope the Republicans are watching closely or it's going to be taken away from us."

Speaking at a stop Monday night in Pennsylvania, Trump did not mince words as he also blasted Sanders for backing Clinton.

So far, Clinton has not responded directly to Trump’s latest jabs. She’s focusing her fire on Trump’s controversial comments about  Khizr and Ghazala Khan -- Muslims whose U.S. Army captain son was killed in Iraq in 2004 -- and Trump’s business record.

"For the life of me I don't know why someone runs to be president of the United States who thinks and says we don't win anymore, our country is full of losers,” Clinton said Monday in Nebraska.

The Khans spoke out against Trump and questioned his familiarity with the Constitution last week at the Democratic National Convention. Trump struck back by questioning whether Ghazala Khan had been allowed to speak. She said she is still too grief-stricken by her son's death.

Trump has since faced bipartisan criticism for his comments.

The campaign detailed financial contributions the Clinton Foundation received from a cement-making company called Lafarge. The same statement cited reporting in French media outlets that the company had entered deals with the Islamic State and other armed groups in Syria to protect its interests there.

“More than any major presidential nominee in modern history, Hillary Clinton is tied to brutal theocratic and Islamist regimes. Now we learn she has accepted money from a company linked to ISIS,” Trump senior policy adviser Stephen Miller said in a statement.

Fox News’ Kristin Fisher and The Associated Press contributed to this report.