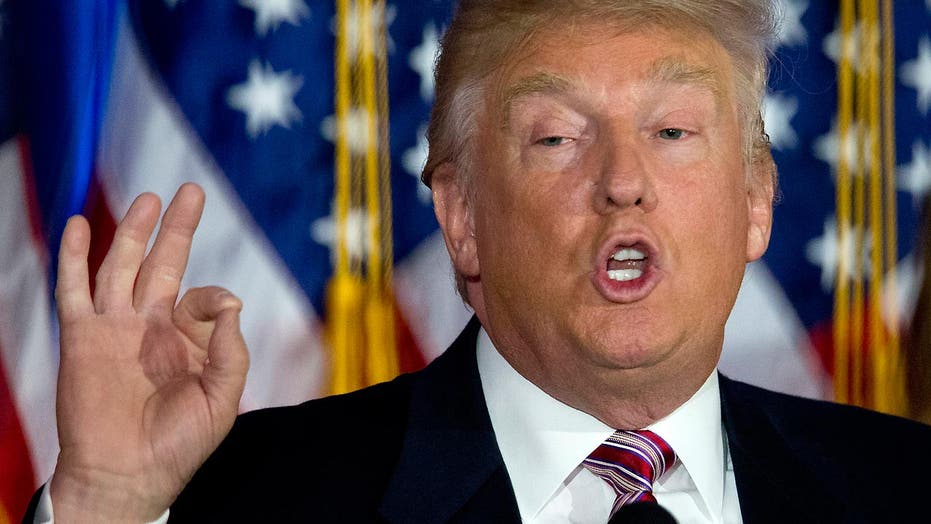 Will teleprompter or The Donald give 'big' Clinton speech?

-Former presidential candidate Herman Cain goes 'On the Record' on whether a slingshooting Donald Trump or a more disciplined GOP presumptive candidate is more effective for a scathing attack on the Clintons. Plus, Trump's potential VP picks

Donald Trump brushed aside the latest controversy over his remarks on a federal judge Tuesday night to deliver a broadside against Hillary Clinton -- even promising to deliver a blockbuster speech on her next week -- as he closed out the primary season with another set of wins, while saying he understands the “responsibility” of being the presumptive GOP nominee.

“I understand the responsibility of carrying the mantle,” Trump said. “I will never, ever let you down.”

His remarks come as Fox News projects Trump has surpassed a new milestone in the Republican primary contest Tuesday night.

With fresh victories in California, New Jersey, Montana, New Mexico and South Dakota, Trump now has enough bound delegates alone to clinch the GOP nomination, no longer having to rely in part on ‘unbound’ delegates, technically free to change their minds, to amass the 1,237 needed to secure the nomination.

In turning his attacks on Clinton, the billionaire businessman said she and former President Bill Clinton “have turned the politics of personal enrichment into an art form for themselves” and that Hillary Clinton “turned the State Department into her own private hedge fund."

Trump also promised to deliver a speech next week on Clinton, and as a likely preview again mentioned her problems using a private email server while running the State Department.

“Secretary Clinton even did all of the work on a totally illegal private server … designed to keep her corrupt dealings out of the public record.”

Trump made no mention of U.S. District Court Judge Gonzalo Curiel, presiding over a civil fraud suit related to Trump University, attempting to end a controversy that has hurt his campaign in recent weeks.

He has said that Curiel, whose parents are Mexican, cannot be impartial in the case, considering Trump has vowed to build a wall along the southern U.S. border to keep out Mexican “rapists” and “drug dealers.”

“It is unfortunate that my comments have been misconstrued as a categorical attack against people of Mexican heritage,” Trump said earlier Tuesday, in a 700-word statement, an apparent attempt to move past the controversy,

Trump also wrote that he does not intend to comment further but used the statement to elaborate on his initial claim that a federal judge’s Mexican heritage presented a conflict of interest for him in Trump University litigation.

The statement capped what was arguably Trump’s toughest day of criticism from leading members of his own party.

Trump’s comments were immediately denounced by a number of high-profile Republicans.

Sen. Mark Kirk, R-Ill., who is facing a tough re-election race, said Tuesday he will no longer support Trump for president.

He said he would not support presumptive Democratic nominee Hillary Clinton, either, and would instead “write in General Petraeus.”