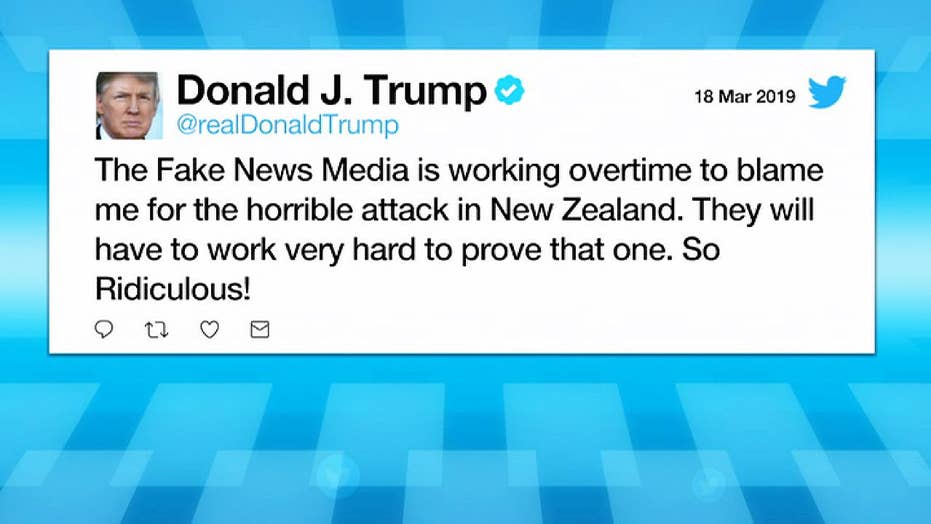 President Trump accused the media on Monday of straining to find ways to blame him for last week's massacre in two New Zealand mosques that left 50 people dead.

“The Fake News Media is working overtime to blame me for the horrible attack in New Zealand. They will have to work very hard to prove that one,” Trump tweeted. “So Ridiculous!”

A 28-year-old Australian-born citizen live streamed the horrific killings when he mowed down Muslim worshippers at Friday prayer in Christchurch. The gunman claimed responsibility and allegedly posted a white nationalist manifesto immediately before the murder spree.

A variety of news originations were quick to tie Trump to the horrific mass shooting.

Piers Morgan penned a column for the Daily Mail headlined, “49 massacred innocent Muslims prove words can have lethal consequences, Mr. President. If you don’t ferociously disown the racist lunatics claiming to be inspired by you, you’ll be damned by your silence.”

“CBS This Morning” reporter Nikki Battiste cited a portion of the killer’s manifesto expressing support for Trump as a symbol of "white identity" (but not for his policies), while “Morning Joe” regular Donny Deutsch speculated that the president wouldn’t issue a strong enough statement because the victims were Muslim.

"I'm going to be curious to see President Trump's reaction. Obviously he'll condemn it. But his reactions when it's a hate crime against Muslims or some of the groups he has exploited with his dog whistles. I certainly hope it's a full-hearted, angry condemnation, and not in any way a pulled-back condemnation because Muslims were a target," Deutsch said before Trump spoke out against the shooting.

Devega added that “Trump didn't pull the trigger in Christchurch,” but “the man who did praised him as a symbol of ‘white identity.’"

“During the second hour of ‘CNN Tonight’ and with almost no information [on] the shooter or shooters, Intercept columnist Mehdi Hasan claimed that ‘far-right terrorism’ was on the rise in the United States and blamed President Trump for attacks both here and abroad,” NewsBusters analyst Nicholas Fondacaro observed.

CNN chief White House correspondent Jim Acosta also tied language in the killer’s manifesto to things Trump has said in the past, while Don Lemon called Trump “ignorant” for saying white supremacists are a small group of people, adding “the racists think he’s racist, and they support him. He doesn’t want to lose that support.”

CNN, MSNBC and other mainstream media outlets have been filled with pundits either tying the killer’s rhetoric to Trump or slamming Trump for not doing enough to condemn the massacre. A CNN on-screen graphic on Monday morning mocked the president for tweeting about a variety of issues over the weekend without tweeting about the attack.

Acting White House Chief of Staff Mick Mulvaney pushed back, saying Sunday that Trump was not a white supremacist and it was unfair to characterize the New Zealand gunman as a supporter of Trump.

Mulvaney comments came during a discussion on “Fox News Sunday” about the killer’s rambling 74-page manifesto in which he describes himself as a supporter of Trump “as a symbol of renewed identity and common purpose.”

“I'm a little disappointed, you didn't put up the next sentence [about whether he supports Trump's policies and leadership] and he said, ‘dear god no,’” Mulvaney said. “I don't think it's fair to cast this person as a supporter of Donald Trump.”