President Donald Trump attacked Sen. Richard Blumenthal, D-Conn., on Twitter early Wednesday during his visit to Vietnam, referring to him as “Da Nang Dick”—a nickname mocking the senator’s false claim of having fought in the Vietnam War.

Trump had been touring Vietnam and meeting with the country’s leaders ahead of his summit with North Korean leader Kim Jong Un in Hanoi when the president excoriated the Democratic senator.

TRUMP, KIM JONG UN'S SUMMIT IN VIETNAM: WHAT TO EXPECT FROM THE LEADERS' SECOND SUMMIT

“I have now spent more time in Vietnam than Da Nang Dick Blumenthal, the third rate Senator from Connecticut (how is Connecticut doing?)” Trump wrote. “His war stories of his heroism in Vietnam were a total fraud - he was never even there. We talked about it today with Vietnamese leaders!”

Blumenthal, who was elected to the Senate in 2010, regularly referenced his supposed Vietnam service in the 2000s, when he was Connecticut attorney general.

“I served during the Vietnam era,” Blumenthal reportedly said at a Vietnam War memorial in 2008. “I remember the taunts, the insults, sometimes even the physical abuse.”

Blumenthal reportedly obtained at least five military deferments between 1965 and 1970. He eventually served in the U.S. Marine Corps Reserve, but did not deploy to Vietnam. 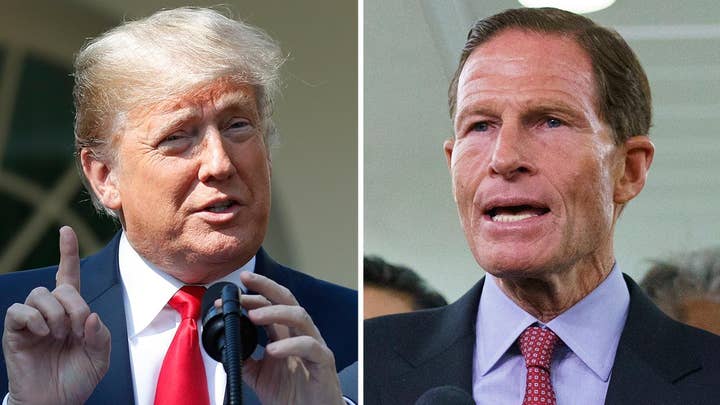 In 2010, Blumenthal admitted that he had regrettably "misspoken" about his service, and takes "full responsibility."

Trump told the New York Times in 2016 that he had his draft deferred after a doctor wrote “a very strong letter” about the bone spurs in his heals.