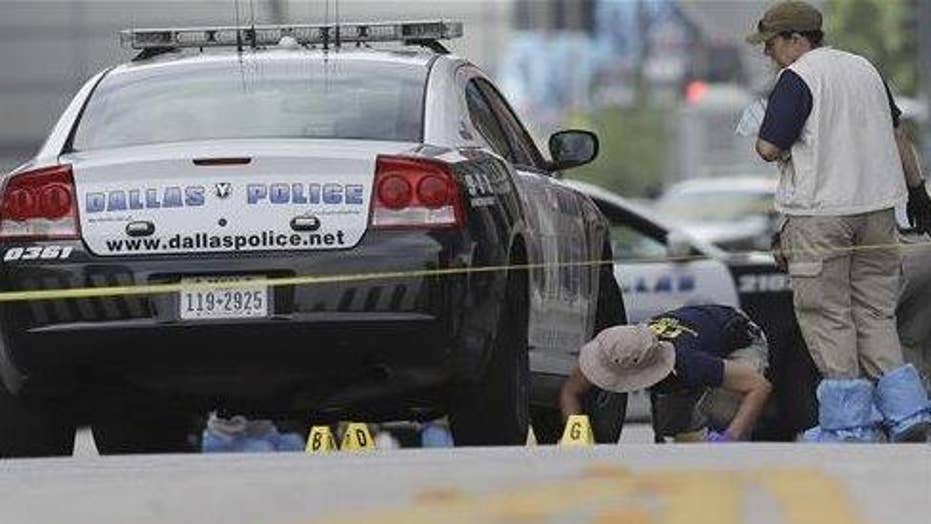 The Fraternal Order of Police, the country’s largest group of sworn law-enforcement officers, is asking the Justice Department to “immediately” investigate the killing of five Dallas police officers as a hate crime.

“The U.S. Department of Justice is always quick to insert itself into local investigations,” group President Chuck Canterbury said Friday. “Today we expect action just as swift. We want a federal investigation into those who were motivated by their hatred of police to commit mass murder in Dallas.”

Police say the shooter in Thursday’s attack, Micah Johnson, a 25-year-old black Army veteran, was angry about two recent incidents in which a police officer fatally shot a black male.

However, the Justice Department’s definition of a hate crime is limited to bigotry, violence or intimidation based on race, ethnicity, national origin, religion, sexual orientation or disability, despite the police group trying to get attacks on police officers addded to the list.

“If there has ever been an assassination of police officers that fits the current hate crime legislation, Dallas is it,” Canterbury told National Public Radio on Friday. “Though the main offender is dead, the hate crime investigation will show to the Justice Department and to the country that this was a hate-based crime.”

Police have said the Johnson acted alone. Three others were taken into custody amid the chaos and reports of multiple shooters. However, police have not updated their situation.

That Johnson died in the attack and apparently acted alone could also hurt the police group’s efforts to get the Justice Department to investigate the shootings as a civil rights violation or hate crime.

However, Texas Gov. Greg Abbott has suggested the investigation is far from over, telling reporters that police will “continue down every rabbit trail until they're exhausted, ensuring that we eliminate any other possible suspects or co-conspirators who may have aided this gunman in anyway.”

“A hate crime is simply a crime that is committed based on the bias of the offender,” Canterbury also told NPR. “In the Dallas case, it's obvious that it fits within the umbrella because the individual has made statements to police that he wanted to kill white policemen. … That's why we've asked for a change in the federal hate crime law.”

The Justice Department didn’t directly answer a question Friday by FoxNews.com about whether the agency would investigate the Dallas shootings as a hate crime or civil rights violation.

“The Department of Justice -- including the FBI, ATF, U.S. Marshals Service and U.S. Attorney’s Office -- is working closely with our state and local counterparts, and we intend to provide any assistance we can to investigate this attack,” spokesman David Jacobs said.

In recent years, the agency has indeed started civil rights or hate crime investigations in high-profile cases in which a black male died when in contact with police.

Last year, the agency investigated the death of Freddie Gray, a black male who apparently was seriously injured while riding unrestrained in a Baltimore City Police wagon, then died seven days later.

The agency also investigated the 2014 incident in Ferguson, Mo., in which unarmed black teen Michael Brown was fatally shot by a police officer.

Both incidents touched off violent and destructive riots, but the agency did not file charges in either case.

On Saturday, President Obama declined to answer a reporter’s question about whether he thought the Dallas attack was hate crime.

“It’s very hard to interpret the motives of this shooter, as we have seen in a host of mass shootings,” he said.