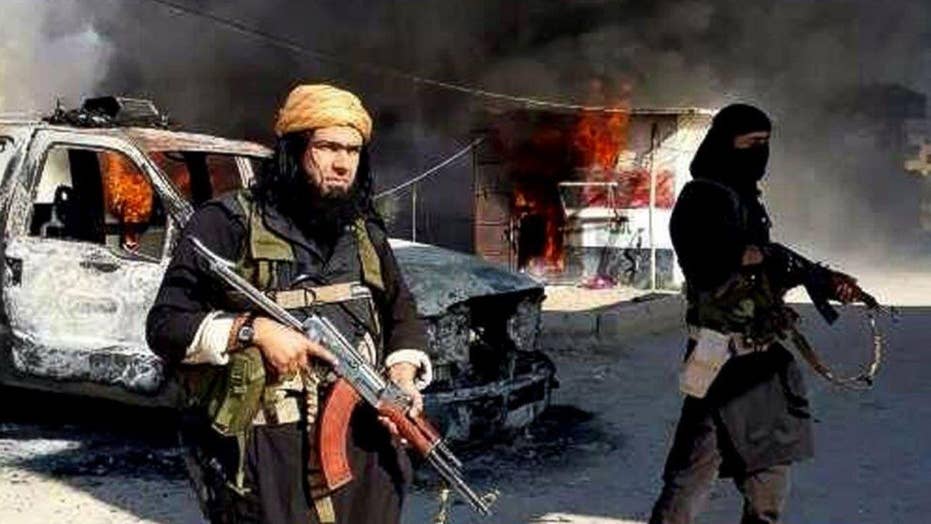 The nation’s top intelligence official confirmed Tuesday that the Islamic State has succeeded in making and deploying chemical agents in Iraq and Syria -- calling it the first such attack by an extremist group in more than two decades.

The confirmation of mustard gas use came during Director of National Intelligence James Clapper's testimony before the Senate Armed Services Committee, where he spoke to the Islamic State's growing sophistication online and in the battlefield.

He did not elaborate on where and when the chemical attacks occurred, though there has been mounting evidence the terror group was experimenting with chemical weapons.

“[The Syrian government] has used chemicals against the opposition on multiple occasions since Syria joined the Chemical Weapons Convention. ISIL has also used toxic chemicals in Iraq and Syria, including the blister agent Sulfur mustard,” Clapper said.

He said this marks the first time an extremist group has produced and used a "chemical warfare agent in an attack since Aum Shinrikyo used sarin in Japan in 1995," referring to the Tokyo subway terror attack that year.

Fox News previously reported on ISIS' potential experimentation with chemical weapons. Photos taken by the Kurds in northern Iraq last summer and reviewed by Fox News showed burns and blistering on skin following exposure to “odorless, colorless” agents absorbed through the clothing. A doctor who was in northern Iraq last year said he treated Kurdish fighters whom ISIS used as "lab rats for WMD," adding that the variety of burns and illnesses suggested that "mustard gas, precursors, as well as neurotoxic acids" were being tested.

Evidence has also indicated that Damascus has been using chemical weapons against the Syrian opposition and civilians, despite an agreement to reduce its stockpile two years ago.

The Japan attack that Clapper referred to in his testimony occured in March 1995. Then, perpetrators hailing from the cult Aum Shinrikyo launched five coordinated Sarin gas attacks on the Toyko subway, killing 12, severely injuring 50 and leaving some 1,000 people with temporary vision impairment.

Clapper dropped the latest revelation amid discussions of other worldwide national security threats, including North Korea, which he said has expanded a uranium enrichment facility and restarted a plutonium reactor that could start recovering material for nuclear weapons in weeks or months.

Meanwhile, Clapper told the Senate Armed Services Committee that Islamic militants will continue plotting against U.S. interests overseas and homegrown attacks will pose the most significant threat from violent extremists to Americans at home.

"The perceived success of attacks by homegrown violent extremists in Europe and North America, such as those in Chattanooga and San Bernardino, might motivate others to replicate opportunistic attacks with little or no warning, diminishing our ability to detect terrorist operational planning and readiness," he said.

"ISIL involvement in homeland attack activity will probably continue to involve those who draw inspiration from the group's highly sophisticated media without direct guidance from ISIL leadership," he said, using an acronym for the militant group.

He also, in his prepared testimony, said ISIS has an "unprecedented online proficiency."

Clapper said that the North Korean government announced in 2013 its intention to refurbish and restart nuclear facilities, to include the uranium enrichment facility at Yongbyon and its graphite-moderated plutonium production reactor, which was shut down in 2007. He added that U.S. intelligence had assessed that North Korea has expanded Yongbyon and restarted the plutonium production reactor there.

His testimony followed the North Koreans' recent underground test explosion and rocket launch. He said the communist nation is working to expand what is thought to be a small nuclear arsenal. U.S.-based experts have estimated that North Korea may have about 10 bombs, but that could grow to between 20 and 100 by 2020.

When asked, separately, if the the intelligence community suspected that the Iranian government was violating its own nuclear agreement with Washington and its international partners, Clapper said, “no.”

“We have no evidence thus far that they are moving toward a violation,” he testified, adding that Washington is in “the distrust and verify mode” and is watching closely.

"We will monitor compliance with China's September 2015 commitment to refrain from conducting or knowingly supporting cyber-enabled theft of intellectual property with the intent of providing competitive advantage to companies or commercial sectors," he said.

He also warned that Afghanistan is at "serious risk of a political breakdown during 2016." He said waning political cohesion, rising activities by local powerbrokers, financial shortfalls and sustained attacks by the Taliban are eroding stability.

Russia, meanwhile, continues to compete “to create an image of being co-equal with the United States,” and is “very paranoid about NATO and about being contained,” he said in response to a question on Russian aggression in Syria and Ukraine.