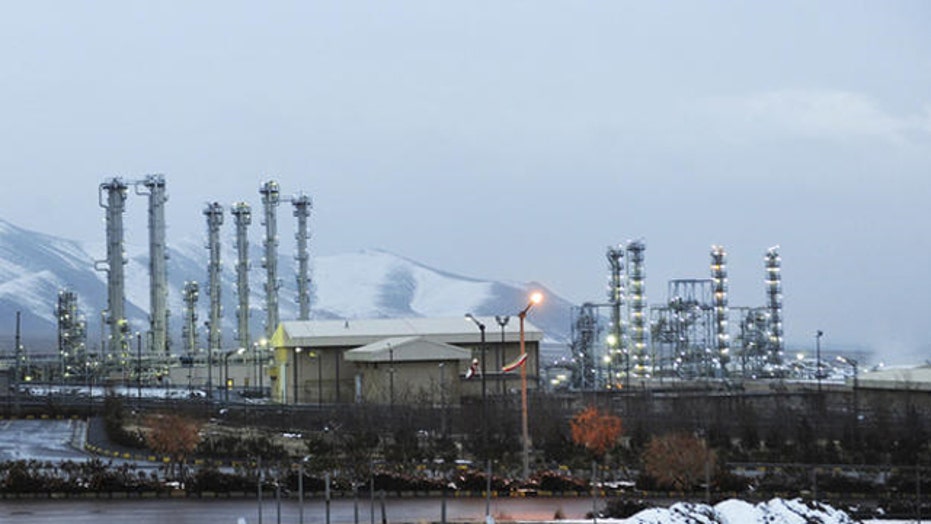 President Obama faced mounting bipartisan pressure on Friday to drop his resistance to an Iran sanctions bill after Tehran announced a new generation of equipment to enrich uranium -- a move the Israelis claimed was further proof the regime seeks nuclear weapons.

One of the president's top Democratic allies is leading the charge for Congress to pass sanctions legislation, despite the president's pleas to stand down. Senate Foreign Relations Committee Chairman Bob Menendez, D-N.J., told Fox News that the "Iranians are showing their true intentions" with their latest announcement.

Menendez was reacting after Iran's nuclear chief Ali Akbar Salehi said late Thursday that the country is building a new generation of centrifuges for uranium enrichment. He said the system still needs further tests before the centrifuges can be mass produced. His comments appeared aimed at countering hard-liner criticism by showing the nuclear program is moving ahead and has not been halted by the accord. At the same time, the government was walking a fine line under the terms of the deal.

Iran, as part of a six-month nuclear deal with the U.S. and other world powers, agreed not to bring new centrifuges into operation during that period. But the deal does not stop it from developing centrifuges that are still in the testing phase.

On Friday, the Embassy of Israel in Washington released a statement reiterating their call for Iran to halt enrichment and remove the infrastructure behind it.

"Installing additional advanced centrifuges would be further indication that Iran intends to develop a nuclear bomb -- and to speed up the process of achieving it," the statement said.

Menendez said he, like the president, wants to test the opportunity for diplomacy.

"The difference is that we want to be ready should that diplomacy not succeed," the senator said. "It's getting Congress showing a strong hand with Iranians at the same time that the administration is seeking negotiation with them. I think that that's the best of all worlds."

Obama would not appear to agree.

At his year-end news conference, the president tried to push back on those advocating new legislation by insisting the tentative deal with Iran has teeth.

"Precisely because there are verification provisions in place, we will have more insight into Iran's nuclear program over the next six months than we have previously," Obama said. "We'll know if they are violating the terms of the agreement. They're not allowed to accelerate their stockpile of enriched uranium."

Obama argues that Congress could step in at any time to approve new sanctions if Iran violates the terms of the agreement. Further, he argues that legislation at this stage could imperil the hard-fought Geneva deal.

But sponsors of the legislation in the Senate, which would only trigger sanctions if Iran violates the interim deal or lets it expire without a long-term accord, say the legislation would do just the opposite -- put added pressure on Iran to rein in its nuclear program.

When Congress returns to work next month, there could be new urgency for legislation. A total of 47 co-sponsors are now behind the legislation introduced by Menendez and Sen. Mark Kirk, R-Ill. Supporters are hoping to reach a 67-member, veto-proof majority.

Kirk told Fox News that the latest development in Iran shows why Americans are distrustful of Iran's intentions.

"If we want diplomacy to succeed and we want a world without Iranian nuclear weapons, we need to make clear to Iran's leaders that bad faith in negotiations will be met with the toughest economic sanctions in history," he said.

Meanwhile, the top foreign adviser to Iran's supreme leader is calling for new direct talks with the U.S. amid multilateral negotiations.

State Department spokeswoman Marie Harf said Friday that all parties will be resuming negotiations after the holidays. She added: "It's important to remember what's at stake if Iran does not choose the path this diplomatic process lays out for them, which is an opportunity to address all of the international community's concerns about its nuclear program in a peaceful way. That remains our goal, and we are firmly committed to ensuring Iran cannot obtain a nuclear weapon."