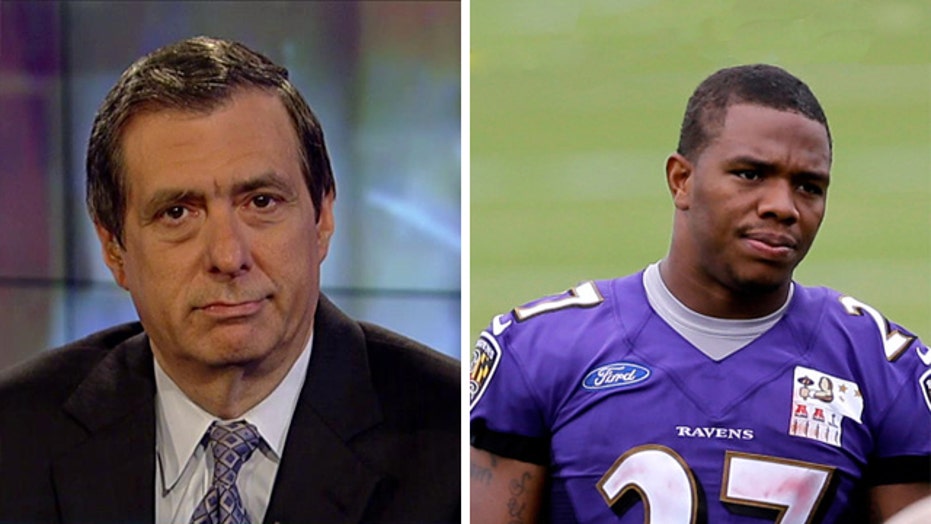 Kurtz on Ray Rice coverage: 'The media are not the problem'

I guess a video showing Ray Rice dragging his unconscious fiancé out of an elevator wasn’t enough to cost him his job.

No, we had to see him actually punching the woman in the face, and her collapsing like a paper doll.

It took that horrifying footage to get the Baltimore Ravens to give the guy the boot, and for the NFL to suspend him indefinitely.

If not for TMZ, Rice would still be making $10 million a year.

We know that images are powerful, especially as they ricochet across the web. But now we know they can shame leaders into doing what they should have done in the first place.

The NFL actually suspended Rice for a measly two games after the first video that showed him dragging Janay Palmer, now his wife, out of that Atlantic City elevator. And the Ravens continued to employ him.

Some people should be hanging their heads in shame today.

I’ve been critical of TMZ for paying for information and video, as Levin has acknowledged that it sometimes does. We don’t know whether money changed hands for the Rice videos. But if that got this spouse abuser out of pro football, there’s an argument that it was worth it.

Now for Rice’s enablers. We knew what Rice had done. We saw the woman’s limp body. He had apologized. The team also trotted out Palmer at a news conference, where she apologized (for what? Somehow instigating her own beating?). Yet here’s what Ravens Coach John Harbaugh had to say earlier:

“I stand behind Ray. He’s a heck of a guy. He’s done everything right since. He makes a mistake, all right?”

Geez. A mistake? Failing to pick up the blitz on third and one is a mistake. Not knocking your girlfriend senseless.

Watching Harbaugh duck questions at a news conference last night, and uttering such inanities as “I’m excited about our offense,” was a new low in tone-deafness.

NFL Commissioner Roger Goodell had this to say earlier:

“You know, you have a lot of people voicing their opinions, but I think it’s important to understand that this is a young man who made a terrible mistake. [Rice's actions are] inconsistent with what we’re all about, and we’ve dealt with it in a serious manner, and we’re very confident that this young man understands where he is and what he needs to do going forward.”

In other words, domestic violence just isn’t that important to the National Football League, unless we see the assault on camera.

“It really makes one think that this decision is maybe about bad press and not, say, an actual concern with or effort to meaningfully address the NFL’s domestic violence problem,” says Salon. “Because if there was any real concern over, say, the NFL’s well-documented domestic violence problem, then probably all of these people would be fired too, no?”

Janay is now blaming the media in a posting on Instagram: "THIS IS OUR LIFE! What don't you all get. If your intentions were to hurt us, embarrass us, make us feel alone, take all happiness away, you've succeeded on so many levels."

I have enormous sympathy for Palmer, and if she wants to forgive her husband, that's her business. But the media are not her problem here, and the story is now so much bigger than this one couple. Pro sports leagues hold up these athletes as outstanding citizens, community leaders. They have to be held to a higher standard.

There is some dispute over whether NFL officials had seen the second, more explicit video, and they are insisting they didn’t. (But TMZ Sports was able to obtain it?) In the end, it really doesn’t matter.

“TMZ did the job the mainstream sports media failed to do in showing us the ugliness of this incident. And don't talk to me about paying for video. Everybody does it in one form or another today, from the networks to the cable channels to the biggest mainstream web outlets in the world…

“I wonder how all the local hosts on sports radio and newscasters on local TV affiliates who swallowed the Ravens shameless spin all summer and reproduced it as a way so as to not have Ravens management glaring at you when you came over to cover the team?”

Anyone who tried to rationalize what Ray Rice did was an enabler and should be sentenced to having to watch that gruesome video again and again.