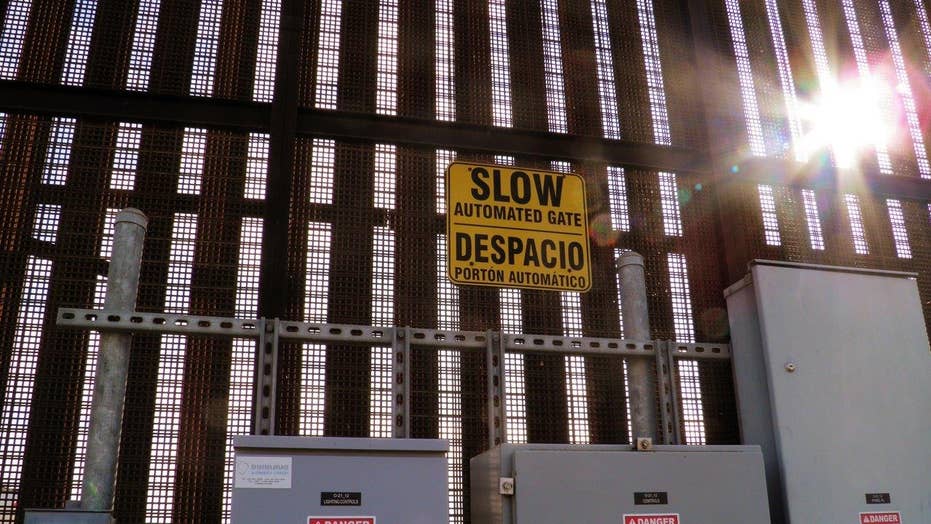 BROWNSVILLE, Texas – Pamela Taylor thought she was living the American dream when she and her husband bought a two-acre plot of land near the Texas border in Brownsville seven decades ago.

She would never have predicted her one-story brick home, surrounded by bright pink bougainvillea bushes and mesquite trees, would become a makeshift crash pad and hideout for border crossers, drug smugglers and human traffickers.

“It’s a way of life now,” Taylor told FoxNews.com. “They come every day.”

Taylor, whose property is on the front line of the border battle, says illegal immigrants have been using her land to sneak into the U.S. for years. One day, the 90-year-old grandmother recalled, she even walked into her living room to find a border crosser trying to evade capture.

“He had come into my house and was just sitting in my rocking chair watching Border Patrol go by,” she said. “It was terrifying.”

Another time, drug dealers stashed 30 pounds of marijuana under her bougainvillea bush.

Taylor is not alone. On a recent tour of border towns in south Texas, FoxNews.com spoke with residents like Taylor as well as business owners and local law enforcement about the daily fears people face as they live and work in what amounts to disputed territory.

Many describe a deteriorating situation where illegal immigration is on the rise but few can do anything about it for fear of retaliation by cartels, human traffickers and even some authorities.

“It’s hard to know who to trust,” Taylor said. She added that while she has a “good rapport” with local law enforcement on the ground, “It’s the ones who sit in the office … they don’t care about us.”

Several residents FoxNews.com spoke to near the border say they feel forgotten.

“We live here, we work here and raise our children here but every day we see [border crossers, drug smugglers] and nothing changes,” said McAllen resident Milo, who asked FoxNews.com not to use his last name out of safety concerns. “I’ve seen [drug and human trafficking] scouts on our street with Border Patrol parked down the road. They don’t do anything.”

He also said he's seen "SUVs sitting in front of the house" after reporting suspicious activity.

As President-elect Donald Trump prepares to take office, vowing a ramp-up in border and immigration enforcement -- and the construction of a controversial U.S.-Mexico border wall -- the outgoing Obama administration has taken some steps to boost enforcement.

But Taylor said her area still is used as a "funnel" for people illegally crossing the border.

Some paddle across the river while others hide in the field waiting for their “coyote” or smuggler to pick them up. Some stroll in through a gigantic gap in the border barrier near her house.

Taylor says she always calls the authorities to report criminal activity on her property, including when she found the marijuana stash. But she also said she worries she could be putting herself and her family in danger.

In south Texas, Mexican and South American cartels have been able to infiltrate law enforcement agencies in the U.S. Several former law enforcement officials from an anti-narcotics force in the Rio Grande Valley are currently serving lengthy prison sentences for drug crimes and corruption.

In 2016, Border Patrol agent Joel Luna was charged with capital murder for the March 2015 beheading of an undocumented Honduran immigrant. Luna, a south Texas native and Army combat veteran, allegedly decapitated Palacio Paz and left his headless body floating in the bay. Prosecutors claim Luna was part of a cartel drug trafficking conspiracy with his brothers. Luna has pleaded not guilty.

In November, Border Patrol agent Eduardo Bazen Jr., also was arrested after being accused of working with a drug trafficking organization. According to the criminal complaint, Bazen said he was paid $8,000 for falsifying a 2007 drug bust and admitted to lying about suspects being present at the scene.

The drug trade – even more so than human trafficking – has skyrocketed in recent years along the border.

In fiscal 2016, nearly 1.3 million pounds of marijuana, cocaine, heroin and methamphetamines were seized along the southwest border, according to U.S. Border Patrol.

“They change tactics all the time,” he said, adding that drug runners are now using large makeshift rafts to float trucks, fully loaded with drugs, across the Rio Grande. “They always seem to be one step ahead.”

As for residents living along the border, some have sold their property and moved. For Taylor, that’s not an option.

“Why should I move? I haven’t done anything wrong," she said.

Instead, she locks her doors but leaves food and water out “for anyone who needs it.”

“I always ask ‘Are you hungry?” she said. “I will feed them but they know I will also be calling Border Patrol.”