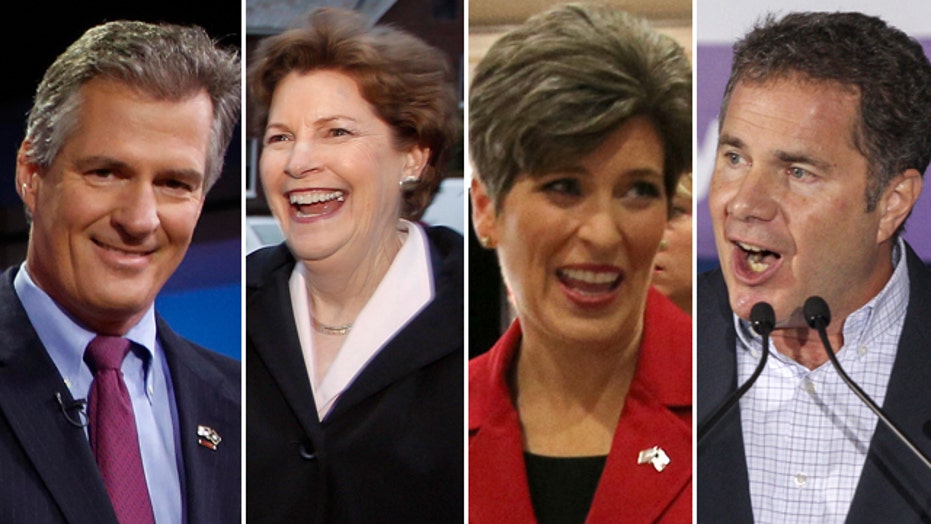 Brown gains ground on Shaheen; Ernst has edge over Braley

Amid all the predictions of a Republican-led stomping on Election Day, Democrats and the outside groups supporting them still see a path to victory and are planning a blitz in key states that could act as a firewall against a GOP Senate takeover.

As the campaign enters its final full week, Democrats also are trying to keep Republican attacks at bay by focusing on local issues – as opposed to President Obama – and are training resources on getting out the vote, including with early voting.

Republicans continue to voice confidence about their chances, and political prognosticators largely predict the GOP will control Congress next year.

But Democrats are staying focused.

Justin Barasky, at the Democratic Senatorial Campaign Committee, pointed to key races where, despite what Republicans are saying about Obama being an albatross, the numbers appear to be improving for the Democrats.

That includes Democrat Michelle Nunn in her race against Republican David Perdue for the open Senate seat in Georgia. Recent polls have shown her up by a few points, though the race still is very close – and the winner needs over 50 percent to avoid a runoff.

Another open question is Kentucky, where Democrat Alison Lundergan Grimes has endured a rough few weeks in her race against Senate GOP Leader Mitch McConnell. But the DSCC, after letting its previous ad buy expire, now is going back on air in the state in support of Grimes with a $650,000 purchase.

“The race is closing,” Barasky said. “I think Kentucky voters are sick of Mitch McConnell.” He added that “in every state the message will be different,” but it invariably will concentrate on Democrats fighting for the middle class while painting their opponents as subservient to outside interests.

McConnell’s campaign has pushed back hard on the contention that Grimes may be gaining, releasing its own numbers showing the incumbent well ahead. Grimes lately had been tripped up on the campaign trial after refusing to say if she voted for Obama in 2008 and 2012, reflecting the mine field that Democrats everywhere are facing over their ties to the president.

The Obama factor alone is one of the biggest challenges for many Democrats in battleground states.

Bill Scher, senior writer for the progressive Campaign for America’s Future, acknowledged they “are not asking him to stand with them on the stage together.”

However, he noted, “even though there is dissonance going on personally with Obama, it’s not like they are abandoning what they believe.”

This is nothing new: at the end of President George W. Bush's term, he was so much of a drag on GOP tickets that he was barely mentioned during the Republican National Convention in 2008. The Obama factor, though, is used as a bludgeon in almost every competitive Senate race this year by Republicans.

Sen. Mark Begich, D-Alaska, who is in a toss-up race with Republican Dan Sullivan, told the Washington Examiner the “president’s not relevant” to his race. “He’s gone in two years,” he said.

When asked in a recent television interview if he is a strong leader, endangered North Carolina Democratic Sen. Kay Hagan couldn’t seem to think of any issues where the president has shined. “[He’s got] a lot on his plate,” she said, before stumbling through the rest of her response.

Barasky insists these races will be won on local issues and not on any national narrative driven by the GOP.

To advance their message in critical states, some candidates have brought in the big guns – not Obama, but figures like Bill and Hillary Clinton – who have been barnstorming across the country, stumping and fundraising on Democrats’ behalf. In just the last week, this included stops for Grimes, Sen. Al Franken in Minnesota, Sen. Mark Udall in Colorado, Sen. Mark Pryor in Arkansas, and a number of gubernatorial candidates. Mrs. Clinton is scheduled to make appearances this weekend for Hagan and Sen. Jeanne Shaheen in New Hampshire. Shaheen, though, is seeing Republican Scott Brown make significant gains in the polls.

Hillary Clinton recently raised $3.5 million in California for the campaign committees of House and Senate Democrats, including $2.1 million at a Hollywood event with Democratic mega-donors Jeffrey Katzenberg and Steven Spielberg.

“In close races like Arkansas, Bill Clinton is as good a trump card as they can play to inoculate Mark Pryor from Obama there,” points out political strategist Dan Gerstein. “Clinton makes the race more about Arkansas.”

Most importantly, appearances by A-listers can help not so much draw undecided voters to the Democratic candidate but mobilize the troops, Gerstein said.

Getting out the vote in a typically sluggish midterm election is critical. Traditional constituencies like black and women voters are being targeted with television and radio ads to make sure they turn out. Particularly with women, Democrats are feeling the heat as recent polling shows Republicans closing the gender gap in Colorado, New Hampshire and Iowa, despite attempts to rally women on issues relating to contraception and abortion rights.

With black voters, The New York Times reported that Obama had also launched an “under-the-radar” campaign, including video ads and outreach to reporters, to ensure that millions of black voters go to the polls in states where they will make a big difference, specifically Georgia and North Carolina.

On “Fox News Sunday,” the heads of the two parties each voiced confidence about their chances.

“We feel really good about our chances of taking the Senate. And it's partly because number one, the president has taken the country in the wrong direction. These lieutenants out there across the country have followed the president off the plank,” he said.

His Democratic counterpart, Debbie Wasserman Schultz, claimed Democrats would hold their ground, and not give the GOP the six seats it needs to take control.

“The one question that voters are going to ask themselves … is who has my back? And on issue after issue, Democrats have stood up for jobs, for the economy, for investing in education and health care, those are the issues that voters are talking about,” she said.

She cited Georgia, and also South Dakota and Kansas – where independent candidates have caused problems for the GOP nominees – as battlegrounds in the final stretch.

But even Democrats acknowledge Republicans appear to have the enthusiasm edge – something that recent polling underscores.

“The side with the more energy is going to have an advantage and at this rate, in the states that are in play, the Republicans have the advantage because there is so much negative energy toward the president,” Gerstein said. “So the Democrats are doing whatever they can do to get their base out, plus whatever they can do to prevent Democratic-leaning voters and independents from voting Republican.”