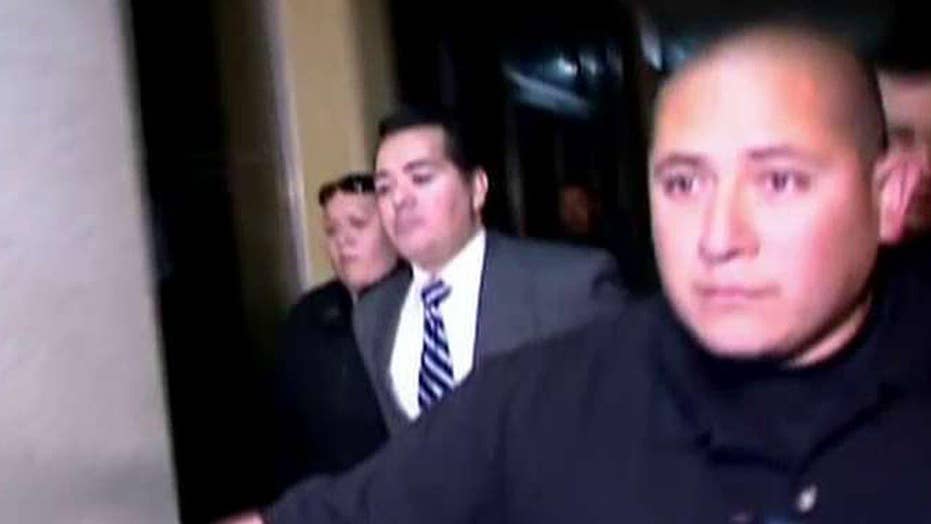 The mayor of a southwestern Texas city was arrested and hauled away outside a council meeting Tuesday night, in a raucous scene just weeks after he and other top officials were hit with a federal indictment on corruption charges.

Crystal City Mayor Ricardo Lopez was arrested after allegedly "inciting a riot" during a city council meeting recess, in which he got into a heated dispute with an angry crowd -- the latest headache for a city that has seen virtually every top official indicted.

"I think the whole town has gone crazy. This has never happened before," Dora Paloma, a former municipal judge, told The San Antonio Express-News.

Tuesday’s meeting reportedly turned ugly when a city clerk told the council a five-day period for Lopez and two other councilmen to resign or face recall elections had ended.

Lopez reportedly argued the five-day period had only started that day, and recessed the meeting to go home and collect documents that he said would back him up. When he returned, he was involved in a scuffle with the crowd, leading to his arrest.

The Express-News reports that hundreds cheered as he was bundled into a police car as TV cameras rolled.

“Only in Crystal City,” Police Chief Jesus Lopez, not related, told KSAT-TV in San Antonia as the mayor was led into a police car.

Mayor Lopez is currently facing federal corruption charges after he was indicted earlier this month -- along with the city manager, mayor pro tempore, one of three current councilmen and a former councilman in a corruption and bribery probe.

Another councilman is charged in a separate case of smuggling Mexican immigrants, leaving only one council member not under indictment.

The town’s leadership is accused of using their position to “enrich themselves by soliciting and accepting payments and other things of value.”

Also charged was Ngoc Tri Nguyen, alleged to be an operator of illegal gambling rooms, who was nicknamed "Mr. T."

Mayor Lopez is accused of taking $6,000 from Nguyen to buy a vehicle. In return, the indictment says, he waived taxes for Nguyen and had employees close competing casinos that violate state law but exist informally throughout South Texas, The Associated Press reported.

City Manager William James Jonas and Mayor Pro Tempore Rogelio Mata are accused of giving a contractor a $12,000 payment "in exchange for payments and other things of value.”

And Lopez, Rogelio Mata, current councilman Roel Mata and former councilman Gilbert Urrabazo are accused of voting to keep Jonas as city attorney and city manager at a salary reported by local media to exceed $200,000. In exchange, Jonas provided payments and other illegal benefits to the four leaders, the indictment alleges.

"I'm just sorry it's such a fiasco," former mayor Frank Moreno told the Express-News. "It's not good for our community.

The Zavala County Sheriff's Office said the mayor would remain in custody overnight until a magistrate sets bond.

Crystal City, a town of about 7,000 people and located 50 miles from the U.S.-Mexico border, was once billed as the “Spinach Capital of the World.” Its logo features a cartoon of Popeye, and a spinach festival with a cook-off and a beauty pageant draws tens of thousands of people each year.