2020 Democrats battle to stand out in crowded field; reaction and analysis from the 'Special Report' All-Stars.

Fox News' Chris Stirewalt weighed in on former Vice President Joe Biden's commanding lead in the polls leading up to 2020 Democratic presidential primary, saying the Democrats have "broadly misinterpreted who is in their party."

"I think the Democrats did not understand that Twitter is not real life and that the Alyssa Milano online activists that do not constitute as a majority of the Democratic Party," Stirewalt said on "Special Report with Bret Baier."

LIMBAUGH: BIDEN MAY HAVE ALREADY WON THE NOMINATION

Biden sits at 36 percent support among likely New Hampshire primary voters, according to a Monmouth University poll conducted May 2-7. Sen. Bernie Sanders, I-Vt., is in second at 18 percent while the rest of the field has single digits.

President Trump last week debuted a new nickname for Biden -- calling him  “SleepyCreepy Joe,” tweeting that Biden would likely get the nomination over Sanders.

“Looks to me like it’s going to be SleepyCreepy Joe over Crazy Bernie [Sanders],” Trump tweeted. "Everyone else is fading fast!"

Stirewalt broke down the Democratic Party divisions and why many favor a Biden nomination.

"The Democratic Party is 60% female, more than 40% nonwhite voters, they tend to be more moderate, more conservative than white, liberal voters who live in big cities with college degrees. So guess what, if you have a bunch of candidates who are running as far left and as hard left as they can and then you have Joe Biden who comes along and says I can beat Donald Trump in am a normal guy, that will sound good," Stirewalt said. 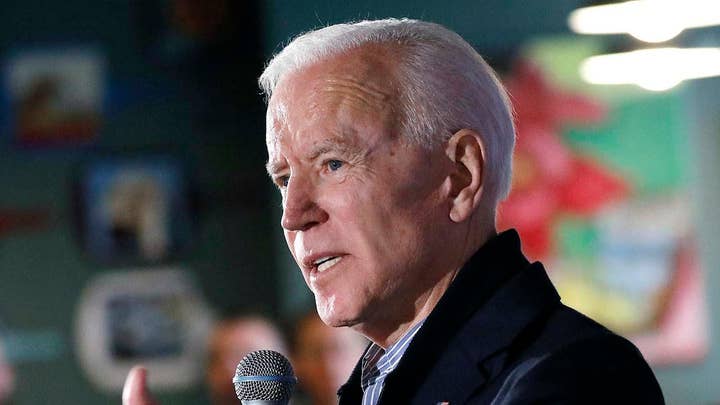 NPR's Mara Liasson also weighed in saying Biden had yet to be truly tested.

"Biden has not really been challenged yet, he has not been on a debate stage with these other candidates yet, and yes, right now he is doing better than I would say almost every single Democrat I have talked to thought he would do. Whether it will last, I don't know," Liasson said.