Biden: The president has done nothing but increase the tariffs and trade deficit

HAMPTON, NH – Joe Biden, in his first trip to New Hampshire since launching his 2020 presidential campaign, took aim at President Donald Trump on Monday over the president’s escalating trade war with China.

Speaking to reporters during a campaign stop in New Hampshire, the former vice president and front runner in the battle for the Democratic presidential nomination charged that Trump has “gone about it all the wrong way.”

Pointing to the president’s decision to raise tariffs to 25 percent on $200 billion worth of Chinese goods, Biden said that "the only people paying the price are farmers and working people right now.”

Biden’s comments came soon after China’s finance ministry announced that in response to Trump’s moves, it was raising tariffs on a wide swath of American goods and products from 10 percent up to 20-25 percent beginning in June. The latest move by Beijing will hike tariffs on some $60 billion in American goods.

“The president has done nothing but increase the tariffs, the debt, and the trade deficit. The way we have to proceed is we have to have our allies with us. It’s not just us. We have to keep the world together,” Biden emphasized as he argued that both organized labor and U.S. allies should “at the table” in negotiations with Beijing.

He also said that “China’s greatest violation is the way in which they steal our intellectual property. We should make it quid pro quo.”

It was just two weeks ago that Biden, campaigning in Iowa, appeared to express a lack of concern over China as global competitor with the U.S.

"China is going to eat our lunch? Come on, man!" Biden exclaimed at the time. "The fact that they have this great division between the China Sea and the mountains in the East -- I mean in the West. They can't figure out how they're going to deal with the corruption that exists within the system. They're not bad folks, folks. But guess what, they're not competition for us."

BIDEN, AS A SENATOR IN 2006, ADVOCATED FOR A BORDER WALL

Biden's trip to the first-in-the-nation primary state is his first since launching his third White House bid in late April. It’s also the former vice president’s first trip to the Granite State since April of 2017, when he headlined a state party fundraising gala.

Biden spoke and took questions in front of a crowd his campaign estimated at around 400, who along with a throng of media were jam-packed into The Community Oven, a popular brick oven pizzeria and restaurant in New Hampshire’s Seacoast.

Asked by someone in the crowd about his passions outside of family, Biden cited combating “abuse of power.”

“I’ve never liked bullies,” he said, sharing that he received abuse as a child for stuttering.

Talking up his support for women’s rights, he highlighted his involvement in helping author the ‘Violence Against Women Act,’ as well as his support as vice president for the ‘It’s On Us’ campaign to combat sexual assault on college campuses.

“It’s on us, it’s on all of us to speak up. It’s on us to engage,” Biden declared. “I go onto campuses … freshman year, you’re in a fraternity (and) you see a brother taking a young woman who’s inebriated up the steps — if you don’t go over and say no, no, no, not in this house, then you’re a damn coward. I don’t want to hear it.”

"If a woman, no matter what the circumstance, if she is unable to say yes, it’s rape,” he continued. “I don’t care how inebriated. No man has a right to put his hand on a woman without her knowing consent. Period."

Biden faced controversy in the weeks before he announced his candidacy over what many saw as inappropriate touching of women that made some feel uncomfortable.

The former vice president’s well-publicized and decades-long affectionate brand of politics was thrust into the spotlight nearly two months ago, with allegations from 2014 Nevada Democratic lieutenant governor nominee Lucy Flores. She said in an essay published in New York Magazine that Biden made her feel "uneasy, gross, and confused" at a campaign rally when she said he kissed her on the back of the head. Her claims quickly went viral and became a top cable news story for a  week. 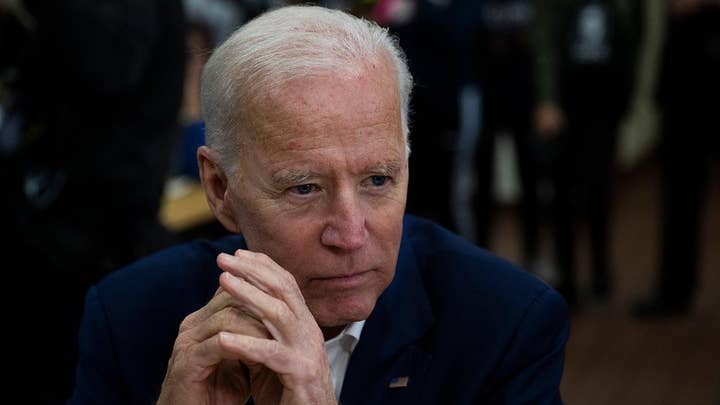 In the ensuing days, more women came forward to recount similar physical encounters with Biden that they said made them feel uneasy.

Those accounts were countered by dozens of testimonials from women – ranging from former Biden staffers to lawmakers – who said they had always viewed the former vice president as supportive.

Biden, at the time, explained that "it is incumbent on me and everybody else to make sure that if you embrace someone, if you touch someone, it’s with their consent, regardless of your intentions."

After his stop in Hampton, Biden headed to Somersworth, where he was endorsed by Mayor Dana Hilliard, the first openly gay mayor in New Hampshire.

In the evening, Biden was scheduled to headline a larger rally at Manchester Community College.

Ahead of his trip, the Republican National Committee took aim at Biden.

“During his tenure as Vice President, he ran down our economy, he ran his mouth that the disastrous ObamaCare was a ‘big f---ing deal.”, and now he’s looking for people to run across our country’s border for free health care.  One thing is for sure, if Granite Staters want to keep our economy strong, they’ll run from ‘Sleepy’ Joe,’” RNC Spokesperson Nina McLaughlin said.

Biden arrived in New Hampshire as the clear Democratic front-runner right now in the national polls, as well as the latest public opinion survey in the Granite State.

Biden stood at 36 percent support among likely Granite State Democratic primary voters, according to a Monmouth University poll conducted May 2-7. Sen. Bernie Sanders of Vermont, who crushed Clinton in the 2016 primary and who's making his second straight White House run, was a distant second at 18 percent.

South Bend, Ind., Mayor Pete Buttigieg stood at 9 percent, with Senator Elizabeth Warren of Massachusetts at 8 percent and Sen. Kamala Harris of California at 6 percent. Sens. Cory Booker of New Jersey and Amy Klobuchar of Minnesota and former Rep. Beto O'Rourke of Texas each stood at 2 percent. Everyone else registered at 1 percent or less.