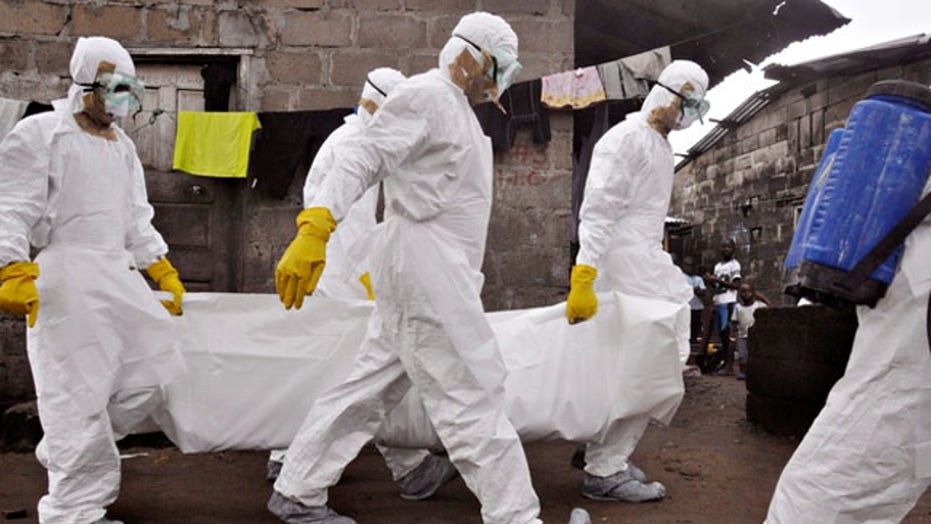 Non-citizens to be brought to US for Ebola treatment?

The State Department insisted Wednesday that an internal memo that pushed for bringing non-American Ebola patients to the U.S. for treatment was written by a “midlevel official” and does not reflect the administration’s plans.

Spokeswoman Jen Psaki reiterated the department stance that there are “no plans” to airlift non-Americans with Ebola out of West Africa and bring them to the United States. She said they only have discussed letting other countries use U.S. “medevac” capabilities to evacuate their citizens to their own home countries.

The “purpose” of the memo stated: “Come to an agreed State Department position on the extent to which non-U.S. citizens will be admitted to the United States for treatment of Ebola Virus Disease.”

The document went on to discuss – and advocate for -- devising such a plan. The memo recommended that “State and DHS devise a system for expeditious parole of Ebola-infected non-citizens into the United States as long as they are otherwise eligible for medical evacuation from the Ebola affected countries and for entry into the United States.”

The memo was obtained after House Judiciary Committee Chairman Bob Goodlatte, R-Va., wrote to Secretary of State John Kerry and Homeland Security Secretary Jeh Johnson a week ago asking if either department was formulating a plan to allow non-U.S. citizens with Ebola to come to the U.S. for medical treatment.

Goodlatte blasted the administration on Wednesday for the memo.

“It’s alarming that senior Obama administration officials so vehemently denied the existence of any plans to transport non-U.S. citizens infected with Ebola to the United States for treatment when a leaked State Department document shows that such a proposal indeed exists and was approved by Obama administration officials,” he said in a statement. “The internal memo shows that this proposal was approved by several people at the State Department, and possibly even by the official leading the Ebola Coordination Unit at the agency. Unfortunately, this lack of transparency is just another example of the Obama Administration trying to hide its actions from the American people.”

But Psaki said that document is “weeks old” and never went anywhere inside the State Department.

“The document referenced was drafted by a mid-level official but not cleared by senior leaders. It never came to senior officials for approval and any assertion that the memo was cleared by decision makers is inaccurate. There are no plans to medevac non-Americans who become ill with Ebola to the United States,” she said. Psaki said “it's sitting on a shelf or on a computer.”