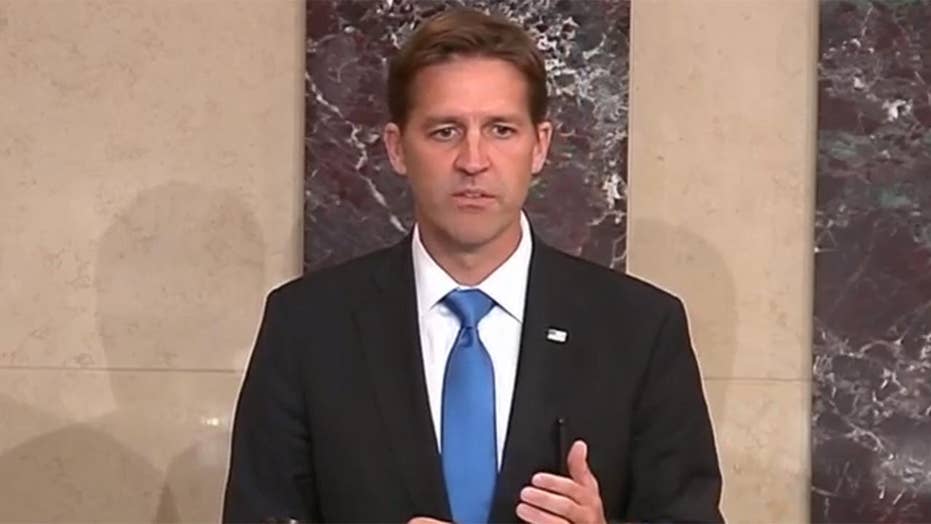 Sasse in Senate speech: I urged Trump not to pick Kavanaugh

Raw video: Nebraska Senator Ben Sasse discusses the #MeToo movement and claims he urged President Trump to nominate someone other than Kavanaugh to the Supreme Court earlier this summer during speech on the Senate floor.

Speaking about the #MeToo movement and the rancorous debate over Kavanaugh’s confirmation and the sexual assault allegations against him, Sasse said on the Senate floor Wednesday he asked Trump to “make a different choice” for the nation’s highest court as early as June. He also sharply rebuked the president for mocking Dr. Christine Blasey Ford — the woman who accused the federal judge of sexual misconduct more than 30 years ago.

Sasse, from Nebraska, didn’t reveal who he asked Trump to nominate but did hint it was a woman. Amy Coney Barrett and Joan Larsen were considered on the short list for Trump’s consideration.

“Part of my argument then was that the very important #MeToo movement was also very new and this Senate is not at all well prepared to handle potential allegations of sexual harassment and assault that might have come forward,” Sasse said, adding his warning “was absent of knowing a particular nominee.”

“We all know that the president cannot lead us through this time.”

Before the Senate was set to vote on Kavanaugh’s confirmation, three women publicly came forward to accuse the federal appeals judge of sexual misconduct.

Ford, a California psychology professor, testified before lawmakers that Kavanaugh held her down and attempted to remove her clothes at a party in the early 1980s. Kavanaugh has vehemently denied the allegations.

A LOOK AT THE ACCUSATIONS OF SEXUAL MISCONDUCT AGAINST BRETT KAVANAUGH

The FBI investigated the claims, and senators will get their first look at the findings Thursday morning. Fox News is told the report did not uncover evidence to corroborate the allegations.

Regardless of the findings, Sasse said he found Trump’s handling of Ford’s testimony, particularly for mocking her during a rally in Mississippi and his tweet suggesting she would have gone immediately to law enforcement if the “attack … was as bad as she says," inexcusable.

“We all know that the president cannot lead us through this time,” Sasse said in his emotional speech.

He also revealed he has two friends who have been raped, something he called “an act from the pit of hell.”

“I believe we have a widespread legacy of sexual assault in this country,” Sasse said.

Trump has stood by Kavanaugh throughout the confirmation process, calling him a “fine man [with] great intellect.

“The harsh and unfair treatment of Judge Brett Kavanaugh is having an incredible upward impact on voters. The PEOPLE get it far better than the politicians,” Trump said in a tweet. “Most importantly, this great life cannot be ruined by mean [and] despicable Democrats and totally uncorroborated allegations.”