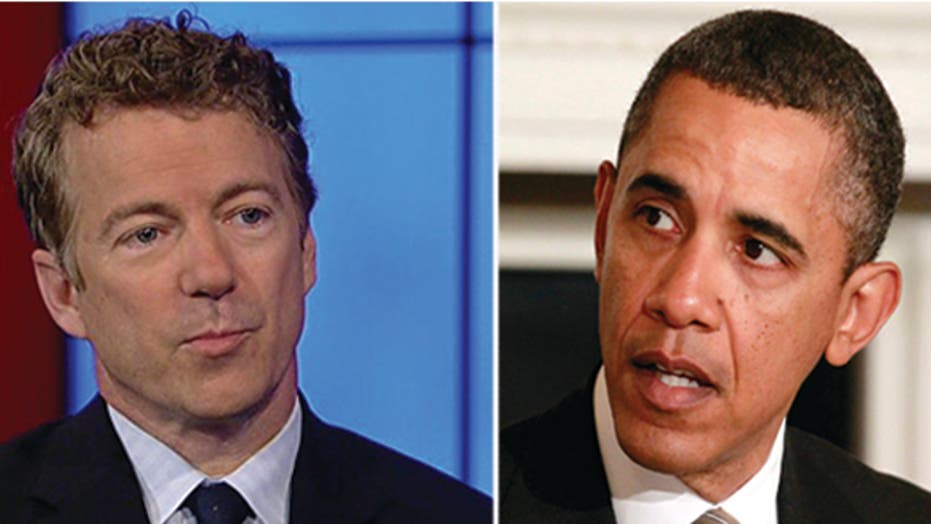 A top Republican lawmaker countered warnings about the purportedly devastating impact of looming budget cuts, calling on the administration to lessen the blow by taking two simple steps -- stop hiring, and stop traveling.

Sen. Tom Coburn, R-Okla., in a letter to the White House budget office, called Monday for a "hiring freeze" on non-essential positions. He pointed out that, amid pronouncements about the dire impact of spending cuts poised to hit starting this Friday, the administration is still advertising for a host of "lower priority jobs" -- like a staff assistant to answer phones at the Labor Department, and a policy coordinator to set up meetings at the Department of Health and Human Services.

The request follows a letter Thursday in which Coburn urged the Obama administration to cancel a 100-city tour aimed at connecting federal officials with local leaders.

Regardless, Coburn disputed claims that the cuts automatically mean customs agents, Defense civilian workers and food inspectors will have to be furloughed or laid off, as the administration has warned. Perusing the roster of federal job openings, he listed 10 positions that "could save as much as $1.4 million" -- money that could be directed toward saving other jobs, he said.

The Labor Department staff assistant position pays up to $81,204; the HHS post pays up to the same amount. That's a drop in the bucket compared with the $85 billion in cuts poised to hit this year. But Coburn suggested far more could be saved by instituting a broader hiring freeze, as he continued to draw attention to what he's long described as Washington's poor spending decisions.

"Instituting such a hiring freeze and re-assigning any of the necessary duties associated with each to current employees will allow federal agencies to adapt to the current fiscal realities without laying off or furloughing civil servants who are performing truly critical or absolutely necessary functions," Coburn wrote.

Democrats, though, argue that Obama's hands are tied, and that the only way to avoid the so-called sequester is for Congress to pass a "balanced" package to avert the automatic cuts -- replacing them with a mix of spending cuts and tax increases, achieved by closing tax loopholes.

Obama, speaking Monday to a gathering of the nation's governors at the White House, again urged Congress to pass an alternative package.

"The longer these cuts are in place, the bigger the impact will become," Obama said, adding that the cuts could be turned off "with just a little bit of compromise."

Shortly afterward, Homeland Security Secretary Janet Napolitano warned that looming cuts to her department would inconvenience travelers at airports across the country. She said TSA cuts would increase wait times for domestic passengers, and cuts to Immigration and Customs Enforcement would mean curtailing detention and investigative operations in that agency.

White House Press Secretary Jay Carney also downplayed the idea that Congress could minimize the problem by giving the administration more flexibility. And in answer to Coburn's letter complaining about upcoming travel, Carney claimed administration officials were not going on a "tour" but were traveling the country to highlight important projects.

Republicans reportedly are working on a bill this week that would grant Obama's Cabinet more leeway to target the cuts in a responsible way.

In an interview with Fox News, Wisconsin Gov. Scott Walker seemed to get behind the plan.

"Why not empower the president and his administration, give them the authority within their budgets to make those changes?" Walker said Monday.

There is an ongoing debate over how much flexibility the Obama administration currently has. Transportation Secretary Ray LaHood on Friday, warning that FAA cutbacks and furloughs would lead to delays at airports across the country, adamantly denied that Cabinet secretaries such as himself had the flexibility to target the cuts.

Politifact.com, examining these competing claims, noted last week that the cuts are largely across the board, in that the same percentage cut is supposed to impact all programs within a budget.

However, the fact-check site said federal managers do have "a fair amount of discretion" on what to cut within specific programs.

Democrats have a bill of their own that would blend tax hikes and spending cuts, along the lines of what Obama has recommended. Both parties are expected to push their respective plans, but so far little headway has been made toward a bipartisan compromise.

The so-called sequester now approaching was never supposed to happen. It was designed as an unpalatable fallback, to take effect only in case a specially established bipartisan congressional super-committee failed to come up with $1 trillion or more in savings from government programs.

Obama has not been able to find success for his balanced approach of reducing deficits through a combination of targeted savings and tax increases. Obama has proposed closing tax loopholes that benefit the top earners and corporations.

"Unfortunately, it appears that Republicans in Congress have decided that instead of compromising -- instead of asking anything of the wealthiest Americans -- they would rather let these cuts fall squarely on the middle class," Obama said on Saturday, in his last weekly radio and Internet address before the deadline, but unlikely to be his final word on the subject.

House Republicans have said reduced spending needs to be the focus and have rejected the president's demand to include higher taxes as part of a compromise. They say legislation passed in early January already raises taxes on top earners to generate an estimated $600 billion for the Treasury over a decade.