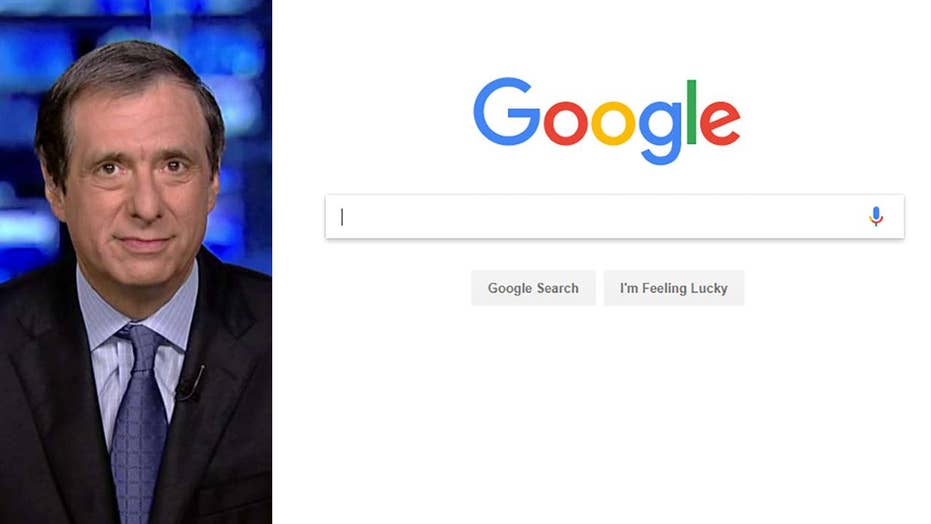 'MediaBuzz' host Howard Kurtz weighs in on the latest criticism of Google's search algorithm, this time coming from President Trump.

It seems like just about everyone is unhappy with Google at one time or another, given its dominant role in helping the world sort through the endless flood of online information.

Politicians, journalists, entertainers, business owners and others all want their names, links, articles and videos to come up higher in the searches. For some, it's a matter of political life and death; for others, a matter of business survival; for still others, a question of sheer ego.

If you're pushed way down in the rankings, then as a practical matter, you don't exist.

President Trump has loudly added his voice, taking to Twitter to attack the search giant:

"Google search results for 'Trump News' shows only the viewing/reporting of Fake News Media. In other words, they have it RIGGED, for me & others, so that almost all stories & news is BAD. Fake CNN is prominent.

"Republican/Conservative & Fair Media is shut out. Illegal? 96% of results on 'Trump News' are from National Left-Wing Media, very dangerous. Google & others are suppressing voices of Conservatives and hiding information and news that is good. They are controlling what we can & cannot see. This is a very serious situation-will be addressed!"

So: The president wasn’t reacting to some scientific study. He was citing a blogger, Paula Bolyard, from the conservative site PJ Media. She simply ran a series of searches for “Trump News” and reported that what she considers left-leaning sites comprised 96 percent of the total: “CNN, by a wide margin, appeared most frequently, with nearly twice as many results returned as the second-place finisher, the Washington Post."

I ran my own test on "Trump News" that morning. The first story was from Fox; the second from CNN; the third was the Washington Post, reporting Trump’s attacks on Google.

The three top tweets that came up: One from Fox's Stuart Varney, the next two from Trump himself.

The three top videos were from the Guardian, CNN and Fox.

There are many ingredients to Google's secret algorithm sauce, but the chief goal is to deliver what people are looking for, and that gives a huge advance to news sites that are already popular. CNN has a very high-traffic website, so of course it pops up a lot.

Keep in mind that Trump told Fox's Ainsley Earhardt that 80 percent of the media is fake news. So of course he wouldn't be pleased by an online search of the coverage about him.

Google's algorithms are open to criticism. The company says while its main mission is to deliver relevant results, it also endeavors "to promote original journalism, as well as to expose users to diverse perspectives."

But even if Google is intentionally tilting some results, is government regulation the answer? When Trump says it "will be addressed," who can write federal regulations that would ensure fairness and objectivity in search results? Wouldn't that inevitably raise questions about political interference?

Over at Facebook, meanwhile, a senior engineer caused a stir with an internal post titled "We Have a Problem With Political Diversity."

In what seemed to validate longstanding complaints about Facebook's culture, Brian Amerige wrote in a post obtained by The New York Times:

"We are a political monoculture that's intolerant of different views. We claim to welcome all perspectives, but are quick to attack — often in mobs — anyone who presents a view that appears to be in opposition to left-leaning ideology."

About 100 staffers have since joined an internal group called FB'ers for Political Diversity.

That may be a tiny fraction of the company's more than 25,000 employees, but Mark Zuckerberg knows he has a problem, which is why he and top officials have been both hiring and meeting with political conservatives.

Such complaints seem more frequent at Facebook and Twitter than at Google. But they underscore how much these tech giants have taken over our discourse, with our gradual consent. They are now the public square.