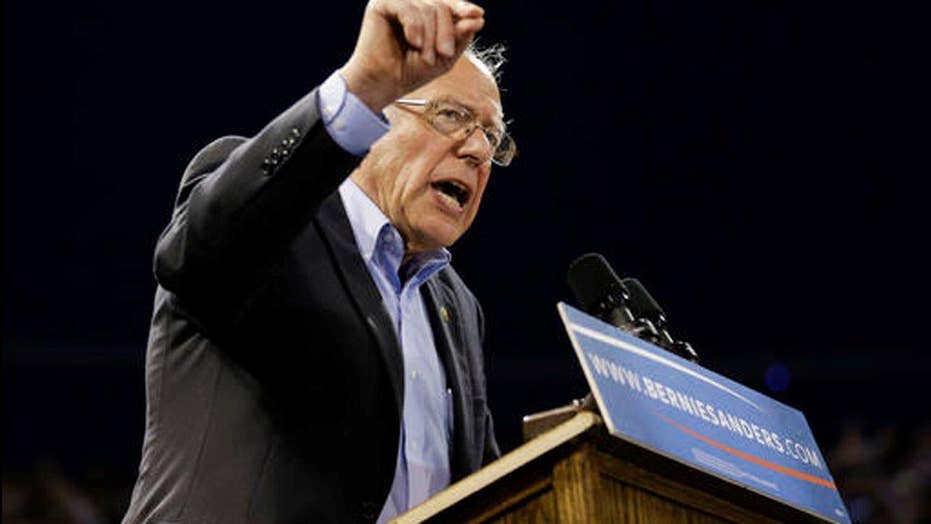 Sanders refuses to go away amid deep divisions with DNC

The race is far from over after the Democratic socialist wins in Oregon and predicts more victories; Mike Emanuel explains on 'Special Report'

Bernie Sanders’ campaign lashed out anew at the head of the Democratic Party overnight, accusing Debbie Wasserman Schultz of “working against” the Vermont senator for “personal reasons” as tensions boiled over in the wake of a rowdy weekend convention in Nevada.

At that convention, Sanders' supporters threw chairs, shouted down speakers and later harassed the state party chair with death threats. Democrats pressed Sanders to forcefully denounce it, and later accused him of issuing a half-hearted condemnation.

Sanders, speaking to CBS News on Wednesday, said that for Democratic leaders to suggest his campaign had anything to do with stoking the violence “is an outrage and unacceptable.”

“It’s been pretty clear ... almost from the get-go that [Schultz] has been working against Bernie Sanders,” he told MSNBC. “I mean there’s no doubt about it, for personal reasons.”

Weaver cited a litany of longstanding campaign complaints in leveling that charge, including what he described as a “confined” debate schedule that included several weekend debates.

Schultz has long faced criticism from inside the party that she has worked to boost Hillary Clinton’s bid, though she has denied it. In the wake of the Nevada convention chaos, she has joined with other Democratic leaders in urging Sanders to take a stronger stand against the unrest.

On the same program, Schultz said, “The fact that the Sanders campaign has issued a ‘but’ in between condemnation of violence and frustration over the process seems to excuse their supporters’ actions, which is unacceptable.”

“He did a better job of handling the Trump situation than I've seen my party chair handle this situation,” he said.

While Clinton is just 90 delegates shy of the number needed to clinch the nomination, Sanders has kept his bid alive with a string of wins, including most recently in Oregon. He is vowing to fight to the convention, amplifying his and his supporters’ complaints about the process along the way.

He issued a qualified statement earlier this week about what happened in Nevada.

"Our campaign of course believes in non-violent change and it goes without saying that I condemn any and all forms of violence, including the personal harassment of individuals," Sanders said. The senator then repeated, in detail, his supporters’ complaints that they were railroaded in the delegate process Saturday night, something Democratic officials deny. "The Democratic leadership used its power to prevent a fair and transparent process from taking place," he said.

Sanders issued his statement moments after speaking with Senate Democratic Leader Harry Reid, who told reporters that Sanders had condemned the violence in Las Vegas. "This is a test of leadership as we all know, and I'm hopeful and very confident Sen. Sanders will do the right thing," said Reid, D-Nev.

Schultz, D-Fla., also condemned the events in Las Vegas. "There is no excuse for what happened in Nevada, and it is incumbent upon all of us in positions of leadership to speak out," she said.

Sen. Barbara Boxer, D-Calif., who was booed when she spoke at the convention, told reporters Tuesday that she'd feared for her safety and said Sanders should give a "major speech" calling on his supporters to reject violence and opt for unity.