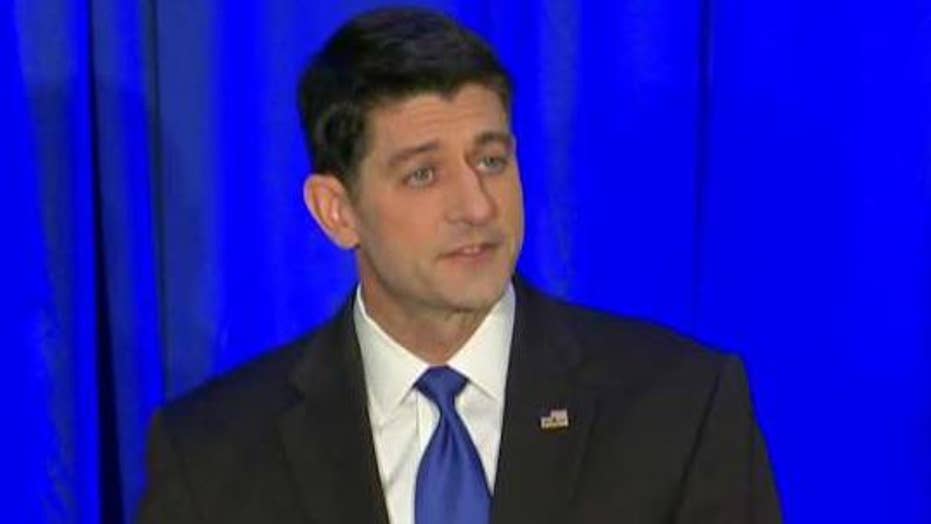 Ryan’s remarks extended an olive branch to Trump, the GOP president-elect with whom he’s had an up-and-down relationship since the start of the 2016 election cycle.

The Wisconsin congressman and leader of the GOP-controlled House said that he’d already spoken twice with Trump and Vice President-elect Mike Pence, a former House member whom Ryan praised for his like-minded conservative principles.

Ryan’s comments also came before returning to Capitol Hill next week to address challenges like ObamaCare and passing a federal budget to avoid a looming government shutdown. And they came amid a divided House Republican Conference, which had already been at odds over the populist, anti-establishment message that Trump will bring to Washington in January.

“With a unified Republican government, we can fix these problems,” Ryan said Wednesday at a press conference in Wisconsin. “What I see is great potential. What I see is a unified government.”

Ryan and Trump have had an uneasy relationship since the start of Trump’s improbable outsider campaign, which began with him vanquishing 16 major candidates in the GOP presidential primaries.

The relationship was at its worst in early October when Ryan said he would stop campaigning for Trump after the release of a 2005 audiotape in which Trump is heard making lewd comments regarding women.

However, Ryan voted for Trump and on Wednesday said he’d spoken to the president-elect twice since he was declared the winner overnight.

“He turned politics on its head,” Ryan said from Wisconsin. “We will work hand in hand.”

He also thanked Trump for pulling several House and Senate Republicans “over the finish line” this election cycle to give the GOP control of the White House and both chambers.

Still, Ryan returns to Capitol Hill amid a Republican caucus divided over him abandoning Trump in the final stretch of a then-close race with Democratic rival Hillary Clinton.

Ryan, who in fall 2015 accepted the job of leading the GOP-led House, was already under fire from the chamber’s most conservative wing -- in large part for relying on House Democrats to pass legislation when he couldn’t get the support of rank-and-file Republicans.

During the months-long Capitol Hill recess that ends next week, there have been rumblings about detractors trying to end Ryan’s roughly 14-month-long leadership of the GOP-controlled House.

However, the House Freedom Caucus, part of the chamber’s most conservative faction, has dismissed news reports about an attempt to replace Ryan.

The group is scheduled to meet Nov. 15, upon returning to Capitol Hill.

Virginia GOP Rep. Dave Brat told FoxNews.com on Wednesday that Ryan had indeed identified that Trump had tapped into something the other politicians had missed. However, he urged the speaker to identify exactly what resonated with voters and present that to them.

“We have to put some meat on the bone,” said Brat, who in 2014 ousted House Majority Leader Eric Cantor in a Tea Party-backed effort in which pollsters also gave him low odds of winning. “What is that new thing? What animated this election?”

The group argues that such a vote should be held after seeing whether Ryan holds to conservative principles during Congress’ lame duck session. The full vote would be held in January.

Ryan on Wednesday also argued that Republicans, with Trump in the White House, now have the opportunity to repeal and replace ObamaCare, outgoing President Obama’s 2010 universal health-care law that has become increasingly expensive for many Americans.

“We weren’t able to pass legislation, but with a unified Republican government, we can fix these problems,” he said.

Republicans went into Election Day with a 54-to-46 majority in the Senate, with Democrats needing to gain just five seats to retake control of the chamber.

As of Wednesday, the GOP still had at least a 51-seat majority in the upper chamber.

“We look forward to working with him,” Senate Majority Leader Mitch McConnell said Wednesday after Trump’s victory. “We’ll be enthusiastically supportive of almost all of his things. And when we have differences, we talk about them privately.”

House Minority Leader Nancy Pelosi, D-Calif., congratulated Trump and urged him to offer a “robust infrastructure jobs bill” that Congress can “quickly pass” and to protect and defend Americans “in a manner that is strong and smart, and that honors the sacrifices of our men and women in uniform.”