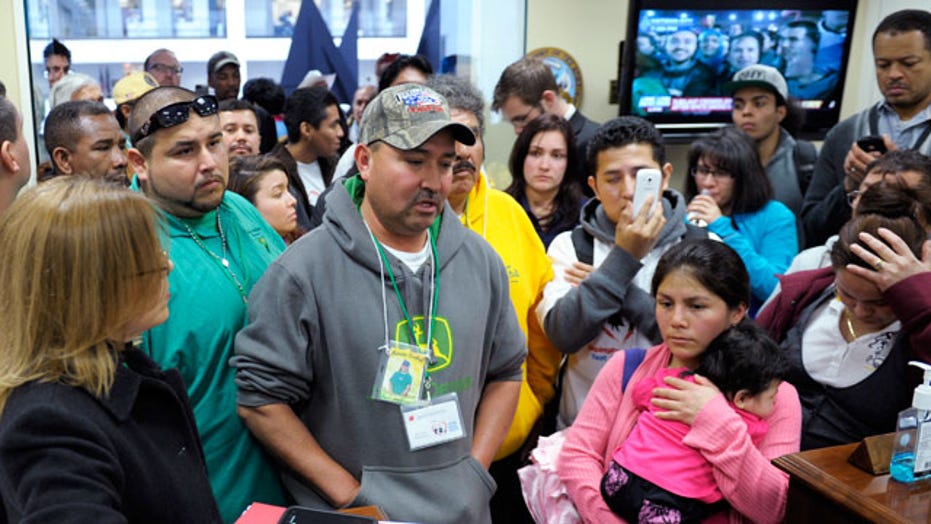 With momentum building toward the completion of a draft immigration bill, Republican lawmakers -- even one at the center of the talks -- are urging Senate leaders to slow the process down to avoid making "fatal" mistakes.

Advocates for a comprehensive immigration reform bill were jubilant over the weekend after representatives for big business and labor agreed on a framework for allowing low-skilled workers into the country.

Sen. Chuck Schumer, D-N.Y., declared Sunday that "every major policy issue has been resolved," and said he anticipates a bill on the floor as early as May.

It comes after Senate Judiciary Committee Chairman Patrick Leahy, D-Vt., in a comment Republicans took as a signal the chairman intends to rush the bill through, stressed that his committee has already held dozens of hearings.

The package is said to include:

But top Republicans are worried mistakes could be made if leaders rush the bill to the floor.

Sen. Marco Rubio, R-Fla., one of eight senators in the bipartisan group drafting the proposal, said Sunday that it "will only be a starting point" and other senators need to weigh in.

"Eight senators from seven states have worked on this bill to serve as a starting point for discussion about fixing our broken immigration system," he said. "But arriving at a final product will require it to be properly submitted for the American people's consideration, through the other 92 senators from 43 states that weren't part of this initial drafting process. In order to succeed, this process cannot be rushed or done in secret."

Rubio also wrote to Leahy on Saturday cautioning that "excessive haste in the pursuit of a lasting solution" is "dangerous" to the goals of immigration reform. He said a "rush to legislate" would be "fatal to the effort of earning the public's confidence."

Rubio's back-to-back statements come after Leahy wrote in a letter to Sen. Jeff Sessions, R-Ala., that he was concerned about "delays for delay's sake" weighing down the process. Leahy said he anticipates an "open and transparent" process with "public proceedings," but also stressed that the committee has held dozens of hearings on the issue.

"If any of the more junior senators need more time to get up to speed, I will look forward to them discussing their specific readiness problems with me directly," he wrote.

Sessions interpreted this as a signal the chairman does not want to hold new hearings.

Referencing the health care overhaul legislation -- which Republicans maintain was rushed through Congress -- Sessions said "never again can Congress pass a far-reaching proposal only for the American people to find out what's in it later."

Sessions said the immigration reform process, at the committee level alone, should take months, not weeks.

"It is one thing to make promises, it is quite another to write a bill that actually works," Sessions said in a statement.

It's unclear whether Democrats, who control the Senate, would agree to such a drawn-out timetable. Negotiators hope to introduce a bill, or the framework for a bill, later this month. President Obama has listed the legislation as a priority for his second term. As gun control legislation appears to falter, the White House and leading advocates for reform are likely to lean on the Senate to move the legislation forward.

At the same time, the bill will have to have enough bipartisan buy-in to make it attractive -- or at least acceptable -- to the Republican-dominated House.

Though Rubio has lately urged Democratic leaders to slow things down, Schumer said on NBC's "Meet the Press" Sunday that he doesn't think Rubio will "walk away."

"He is protecting some of the things that he thinks are very important in the bill. But I don't think that'll stand in the way in any way of any final agreement," Schumer said.