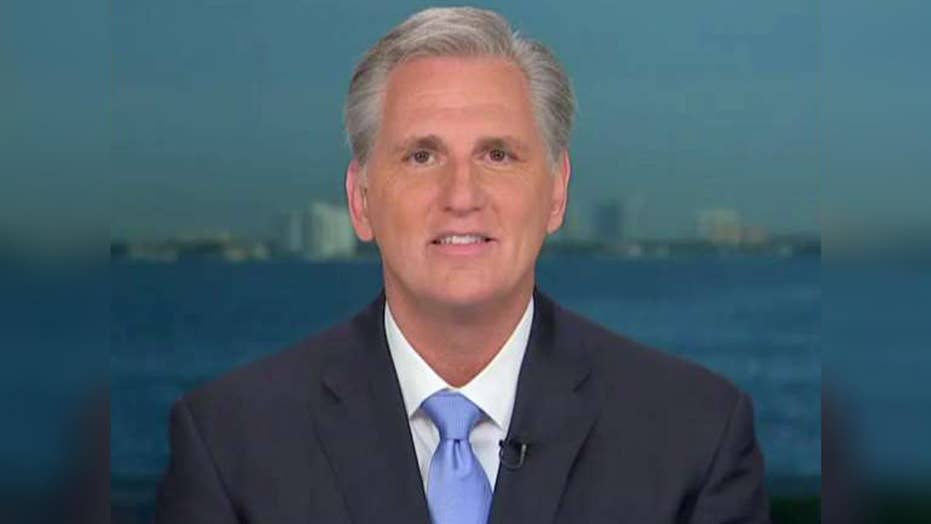 The House majority leader, whose California office was hit with a massive rock and burglarized, reacts to the search for the suspects and the border security debate on Capitol Hill.

Two men apparently attacked the Bakersfield office of House Majority Leader Kevin McCarthy, R-Calif., on Monday night, throwing a massive rock through one of its windows and burglarizing office equipment inside.

McCarthy posted four photographs documenting the alleged episode on Instagram -- three showing the individuals he identified as possible suspects, and one providing a clear view of a massive slab of rock lying on the floor amid shattered glass.

"Does anyone know these two guys?" McCarthy wrote on the social media site, next to images of two people spotted near his office.

The Bakersfield Police Department did not comment on the alleged incident when reached by Fox News and said it would have more information on Tuesday.

McCarthy, like several other congressional Republicans, has faced threats and harassment in the past several weeks. In August, protesters in Sacramento chanting "No justice, no peace" disrupted McCarthy's event at the Public Policy Institute of California.

Ironically, on Thursday, McCarthy retweeted President Trump's "#JobsNotMobs" slogan, underscoring the deteriorating level of civility in politics ahead of the Nov. 6 midterm elections. 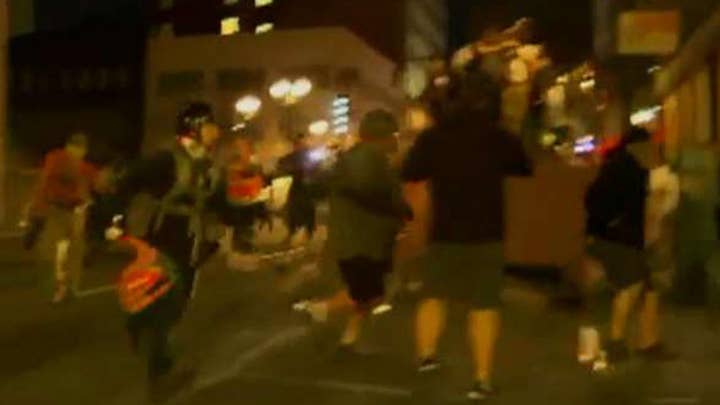 Earlier this month, for example, it was revealed that a Democratic congressional aide accused of publishing the private information of at least three Republican lawmakers also allegedly threatened to leak senators’ children's health information if a witness told anyone about his activities.

And prominent Republicans, including Sen. Ted Cruz, R-Texas, and Senate Majority Leader Mitch McConnell, R-Ky., have been harassed in recent weeks while eating at public restaurants with their wives by hostile liberals. Other top GOP officials, such as Homeland Security Secretary Kirstjen Nielsen, were similarly accosted over the summer, although Nielsen's security detail kept the protesters at bay.

Meanwhile, authorities on Monday responded to the home of billionaire progressive investor George Soros after an explosive device was reportedly located by one of his employees.

Just last week, a Republican who's running for a seat in the Vermont House of Representatives said she received a letter with death and rape threats from an alleged socialist. Deserae Morin, of Colchester, published a photo of the vulgar letter -- comprised of cut-out block letters -- on her Facebook page over the weekend. It read, in part, "My comrades will kill you and the Constitution. ... Socialism is here. Open season for Republican death in Vermont."

Republican Sen. Cory Gardner, R-Colo., revealed to Fox News earlier this month that his wife had received a similar graphic message, along with a video depicting a beheading. Gardner also told Fox News that someone has publicly posted the names and addresses of his family members.

Mobs of progressive protesters even attempted to claw their way into the Supreme Court during Kavanaugh's swearing-in.

Although House Minority Leader Nancy Pelosi, D-Calif., was verbally confronted by protesters last week at a campaign stop, Republican politicians have been targeted dramatically more often -- a fact the president has repeatedly emphasized on the campaign trail.

"Democrats produce mobs, Republicans produce jobs," Trump said in Arizona last week, adding that the Democrats have become too extreme to be entrusted with power. He described them as an "angry, unhinged mob."