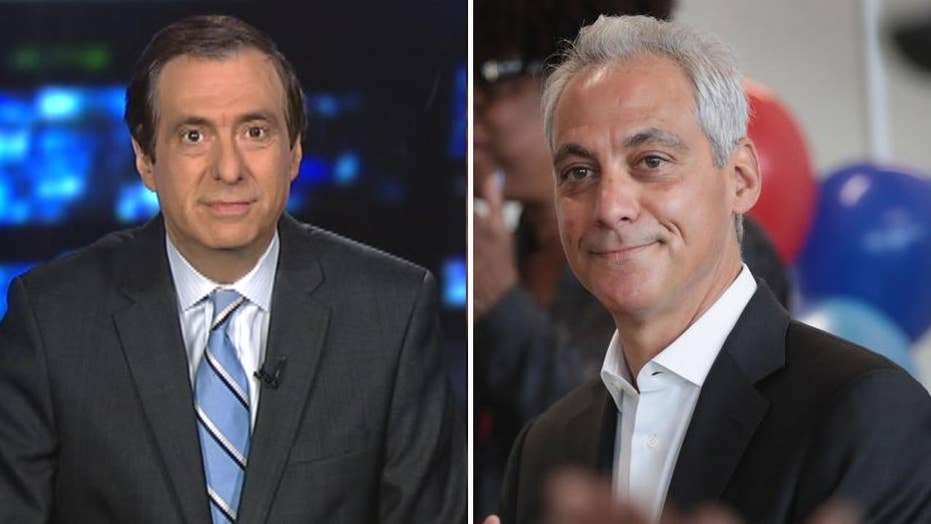 Howard Kurtz: How Dems help the president paint them as socialists

The Democrats are in a leftward lurch that could ruin their chances of retaking the White House.

Rahm Emanuel, now stepping down after two terms as mayor of Chicago, knows something about winning elections. He was a key White House operative for Bill Clinton and chief of staff for Barack Obama.

It was Rahm, as chairman of the Democratic campaign committee, who engineered the party's takeover of the House in 2006 — and is known for his hardball brand of politics, with all the subtlety of his frequent F-bombs.

If Mayor Emanuel believes the Democrats are in danger of self-destructing, as he argues in a piece for the Atlantic, his party might want to pay attention.

I've been arguing that the Democrats, who regained control of the House in November mainly on the strength of more moderate candidates, are increasingly being defined by their most extreme members.

Just look at the last few weeks, and the stances embraced by some of its presidential contenders and younger members: Slavery reparations. Green New Deal. Medicare for All. Free college tuition. A 70 percent tax rate on income over $10 million. Break up Amazon, Facebook and Google.

Is that how they win back Trump Democrats in Michigan, Pennsylvania and Wisconsin?

Add to that various self-inflicted wounds, such as delaying and then watering down a resolution to denounce Rep. Ilhan Omar after her latest anti-Semitic comments, and you've got a party with a problem. (President Trump went way overboard in saying the Democrats have become "an anti-Jewish party" and telling donors that "the Democrats hate Jewish people," given that perhaps three-quarters of Jews vote Democratic. But he was seizing on an opening.)

At the South by Southwest conference, Alexandria Ocasio-Cortez offered the standard left-wing critique of capitalism by saying that "we're reckoning with the consequences of putting profit above everything else in society." But she added that "to me capitalism is irredeemable," the kind of sound bite that goes viral, given the enormous media attention she attracts.

And on "Morning Joe" the other day, 2020 contender John Hickenlooper, the former Colorado governor, repeatedly refused to call himself a capitalist. When did that become a dirty Democratic word?

In the Atlantic, Emanuel says Trump could win over swing voters by constantly branding the Democrats as socialists.

HILLARY CLINTON HUDDLES WITH 2020 DEMS, INCLUDING BIDEN, HARRIS AND BOOKER

"The last thing we should do is serve him slow pitches over the plate that allow him to define us on his terms. Unfortunately, that’s exactly what Democrats have been doing since he went before Congress in early February. It’s almost as if we've been duped into reading from his ready-made script.

"Earth to Democrats: Republicans are telling you something when they gleefully schedule votes on proposals like the Green New Deal, Medicare for all, and a 70 percent marginal tax rate. When they're more eager to vote on the Democratic agenda than we are, we should take a step back and ask ourselves whether we're inadvertently letting the political battle play out on their turf rather than our own. If Trump's only hope for winning a second term turns on his ability to paint us as socialists, we shouldn't play to type."

While saying the party shouldn't abandon its core priorities, Rahm says Democrats and independents are so desperate to win that they'll support a candidate who doesn't agree with them on everything, as long as that person is seen as able to win.

"So the ideological debates often shroud what voters really want — a nominee capable of standing steady and strong as Trump tries to bully his way into an Election Night victory. The president's low approval ratings suggest that, if he wins a second term, Democrats will have no one to blame but ourselves."

What began as a broadside from the right has now gone decidedly mainstream as the stumbles continue. The argument even made the front page of Sunday's New York Times:

"The sharp left turn in the Democratic Party and the rise of progressive presidential candidates are unnerving moderate Democrats who increasingly fear that the party could fritter away its chances of beating President Trump in 2020 by careening over a liberal cliff."

The challenge for Pelosi is to rein in her more lefty members who are sharply changing the public face of the party. But she can't control the Bernie-style presidential candidates who seem to believe that a hard left turn is the way to win the nomination.

Jeanine Pirro, the Fox weekend host who is friendly with President Trump, has drawn a strong rebuke from the network.

She took on Omar, one of the first two Muslim women elected to Congress, in remarks that crossed a line.

Judge Jeanine said Saturday night that Omar is "Sharia-compliant" and engages in "Sharia-adherence behavior." Why? Because the freshman Democrat wears a hijab.

In a statement, Fox News said: "We strongly condemn Jeanine Pirro's comments about Rep. Ilhan Omar. They do not reflect those of the network and we have addressed the matter with her directly."

I've been critical of Omar for making anti-Semitic comments about money, then apologizing, then making more remarks about pro-Israel advocates having "dual loyalty" — an old anti-Semitic canard that is one of the worst things you can say about Americans.

But the congresswoman should be able to wear whatever she wants in accordance with her religious beliefs. That shouldn't result in her loyalty to the Constitution being questioned. And the comments were in Pirro's scripted opening remarks, not something uttered off the cuff.

Omar thanked Fox for the statement, tweeting: "No one's commitment to our constitution should be questioned because of their faith or country of birth."

Pirro, a former prosecutor, is not backing off, however. In a statement Sunday, she said, "I did not call Rep. Omar un-American. My intention was to ask a question and start a debate, but of course because one is Muslim does not mean you don't support the Constitution." She invited Omar to appear on her show.

As the Hollywood Reporter noted, Pirro's slam drew criticism from a staffer for "Special Report with Bret Baier." Associate producer Hufsa Kamal tweeted: "@JudgeJeanine can you stop spreading this false narrative that somehow Muslims hate America or women who wear a hijab aren't American enough? You have Muslims working at the same network you do, including myself. K thx."

Pirro hosts an opinion show, but her comments were out of bounds.