Chicago Mayor Rahm Emanuel doesn’t agree with House Speaker Nancy Pelosi that if President Trump can declare a national emergency to bypass Congress in order to secure funding for his long-promised border wall, a Democratic president can do the same for guns.

“The one thing you don’t want to mimic … their politics,” Emanuel said during a guest appearance Friday on HBO’s’ Real Time with Bill Maher. “He [Trump] wants you on certain cases to actually mimic what he’s doing because then there’s a difference of nothing. That’s not where you want to go against him.”

The conversation quickly moved on to other topics without a mention of Friday's deadly workplace shooting in Aurora, Ill., that ended with six dead, including the gunman, and several wounded police officers.

Emanuel -- the former White House chief of staff under former President Barack Obama -- believes Trump is using a national emergency declaration, not to enhance border security, but to deliver on his signature campaign promise. 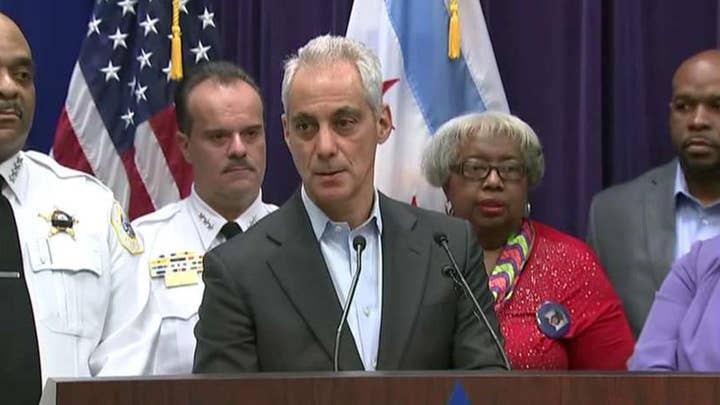 “You have a faux constitutional crisis to basically cover a real campaign crisis,” he said “This is all about the campaign. Some pledge he made.”

The two-term mayor was then asked his thoughts on embattled Democratic Gov. Ralph Northam of Virginia, who has resisted calls to resign over his 1984 medical school yearbook page that featured one person in Ku Klux Klan garb and another in blackface. Northam denies that he is in the photo.

“I don’t buy that that's not his photo,” said Emanuel, before making his case that Northam shouldn't leave office. He cited Obama’s initial opposition to gay marriage and Abraham Lincoln’s emancipation of slaves.

“Part of civil rights. Part of any change is maturity and evolution,” he said. “He is now going to be the greatest fighter for civil rights because he has something to prove. That fact is he has evolved.

“There’s nothing like a convert. He is going to have a zealotry to prove something because he has the campaign of his reputation.”

A recent poll found that 58 percent of African-American residents in Virginia want Northam to remain in office.