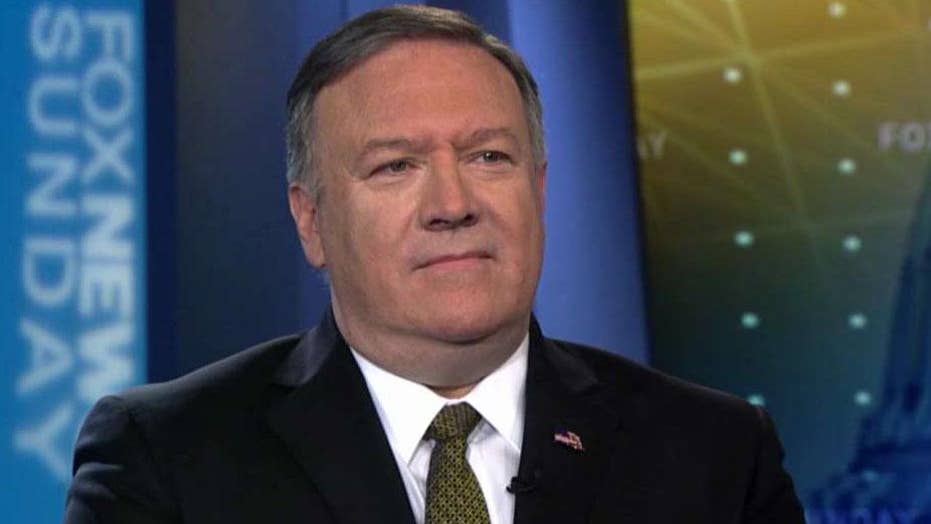 Secretary of State Mike Pompeo, speaking to "Fox News Sunday," forcefully rejected a lawsuit filed against the Trump administration this week by the father of an Alabama woman who left the U.S. to join the Islamic State group, saying in no uncertain terms that she is a "non-citizen terrorist" who "is not coming back."

In the federal court filing, Ahmed Ali Muthana argued that his daughter, Hoda Muthana, 24, is an American citizen by birth and that the White House should recognize her citizenship and "accept Ms. Muthana and her son back into the United States and to use all available means to do so." But Pompeo countered that Muthana had deliberately endangered U.S. soldiers and would not prevail in court.

"She's a non-citizen terrorist; she has no legal basis for a claim of U.S. citizenship," Pompeo told anchor Chris Wallace. "She's not coming back to the United States to create the risk that someday she'd return to the battlefield and continue to put at risk American people, American kids, American boys and girls that were sent to help defeat ISIS -- she put them at risk, she's not a U.S. citizen, she's not coming back."

Muthana, 24, has pleaded with officials to let her back into the U.S. following her recent escape from ISIS and capture by Kurdish forces. She was born in 1994 in Hackensack, N.J.

Muthana’s father was a diplomat, which her legal representative, Hassan Shibly, acknowledged Wednesday. According to the United States Citizenship and Immigration Services, children born in the United States to accredited foreign diplomatic officers do not acquire citizenship under the 14th Amendment since they are not born subject to the jurisdiction of the U.S. at the time.

However, Shibly says Muthana’s father stopped being a diplomat months before Hoda was born in New Jersey.

Pressed by Wallace as to the legitimacy of Muthana's claim of birthright citizenship, and whether her father's diplomatic status was the issue, Pompeo responded: "There's litigation ongoing. Here's what I can tell you: We have a strong legal basis for our claim she's not a citizen, and she's not coming back."

Pompeo's comments echoed his remarks in a statement on Wednesday, when he stated that Muthana had "no right to a passport, nor any visa to travel to the United States. We continue to strongly advise all U.S. citizens not to travel to Syria.”

President Trump also tweeted that he had instructed Pompeo to deny Muthana's attempt to return.

Separately, Pompeo discussed the upcoming summit between North Korea leader Kim Jong Un and Trump in Hanoi, Vietnam, which is slated for Wednesday and Thursday. Kim was on a train Sunday to Vietnam, according to state media, and it could take more than two days for the train to travel through China to Vietnam.

"There’s been no change in U.S. policy since the time I’ve been secretary of state and frankly even before that when I was CIA Director," Pompeo, who was also set to depart for Hanoi, told Wallace. "Our objectives are clear, our mission is clear. President Trump’s also said this is going to take time. There may have to be another summit. We may not get everything done this week. We hope we’ll make a substantial step along the way."

In this Saturday, Feb. 23, 2019, photo provided on Sunday, Feb. 24, 2019, by the North Korean government, North Korean leader Kim Jong Un waves from a train before leaving Pyongyang Station, North Korea, for Vietnam. Kim was on a train Sunday to Vietnam for his second summit with U.S. President Donald Trump, state media confirmed. Independent journalists were not given access to cover the event depicted in this image distributed by the North Korean government. The content of this image is as provided and cannot be independently verified. Korean language watermark on image as provided by source reads: "KCNA" which is the abbreviation for Korean Central News Agency. (Korean Central News Agency/Korea News Service via AP)

"I've spent a lot of time with Chairman Kim," Pompeo said. "My time is on the ground today, continuing to flesh out paths forward, developing a roadmap for a path forward between the two countries. We're determined to achieve that. It's important for the world's security."

Pompeo said the summit "might be one day, might be two days" or even longer. In his upcoming meeting with Trump, experts say Kim will seek a U.S. commitment for improved bilateral relations and partial sanctions relief while trying to minimize any concessions on his nuclear facilities and weapons.

Asked whether North Korea has given concrete indications that it is willing to provide an inventory of its nuclear arsenal, or surrender its weapons, Pompeo acknowledged some progress has stalled.

"In June of last year, in Singapore, Chairman Kim unequivocally stated he would denuclearize his country. There were other pillars that we committed to as well. We've made progress on some, less so on others. This is a complicated process."

Discovery of the missile base, one of an estimated 20 sites undeclared by North Korea, comes just days after the White House announced plans for more high-level talks between President Trump and Kim Jong Un; reaction from Rep. Mac Thornberry, Republican member of the House Armed Services Committee.

Pompeo continued: "I was CIA Director at one point. The history is difficult. The previous administration's policy was to allow the North Koreans to test [nuclear weapons], pray they'd stop, and then cower when they threatened us. Test, pray, and cower. That's been upended by President Trump. We've put real economic pressure on the North Koreans. We've built out ... the world's coalition to communicate to Chairman Kim that now is the time, now is the moment -- and I hope we'll make real progress on that this week.

Trump tweeted after the Singapore summit that there was "no longer" a nuclear threat with North Korea, and said repeatedly at rallies that "we fell in love" and "he wrote me beautiful letters." On Sunday, Pompeo suggested Trump's rhetoric was strategic.

ANALYSIS: AS SOCIALISM COLLAPSES IN VENEZUELA, TRUMP RESISTS ITS ENCROACHMENT IN U.S.

"Relationships matter," Pompeo said. "They affect everything in our lives. Whether it's grand strategy and denuclearization, or simpler things. Relationships absolutely matter. It's important that the two leaders are able to effectievly communicate."

On Twitter earlier Sunday, Trump wrote that he has a "great relationship with Chairman Kim," and added that "President Xi of China has been very helpful in his support of my meeting with Kim Jong Un. The last thing China wants are large scale nuclear weapons right next door. Sanctions placed on the border by China and Russia have been very helpful." Trump also wrote that Kim realizes that denuclearization would lead to "rapid growth" for the isolated, impoverished nation.

U.S. defense officials are not planning any troop reductions in the region, but some have indicated that they would not be surprised if Trump puts reductions on the table as part of his negotiations with Kim. Other possibilities that worry many in Seoul include that Trump will suspend or drastically downsize another major set of military drills this spring, or that he'll settle for a deal where the North abandons its long-range missile program aimed at the U.S. while not addressing the North's shorter-range missiles targeting Seoul and Tokyo.

Demonstrators are engulfed by a cloud of tear gas fired by Bolivarian National Guard officers during clashes in Urena, Venezuela, near the border with Colombia, Saturday, Feb. 23, 2019. Venezuela's National Guard fired tear gas on residents clearing a barricaded border bridge between Venezuela and Colombia on Saturday, heightening tensions over blocked humanitarian aid that opposition leader Juan Guaido has vowed to bring into the country over objections from President Nicolas Maduro.(AP Photo/Fernando Llano)

Closer to home, Pompeo additionally condemned the Venezuela military for continuing to block U.S. humanintarian aid, calling the violence "the worst of the worst of a tyrant."

A U.S.-backed drive to deliver foreign aid to Venezuela this weekend met strong resistance as troops loyal to President Nicolas Maduro blocked the convoys at the border and fired tear gas on protesters in clashes that left two people dead and some 300 injured.

"We’re very hopeful that in the days and weeks and months ahead, the Maduro regime will understand that the Venezuelan people have made its days numbered," Pompeo said.

As night fell Saturday, U.S.-backed opposition leader Juan Guaido refrained from asking supporters to continue risking their lives trying to break through the government's barricades at the Colombian and Brazilian borders. Instead, he said he would meet Vice President Pence on Monday in Bogota at an emergency meeting of mostly conservative Latin American governments to discuss Venezuela's crisis.

"Every option is on the table," Pompeo said. "We're going to do the things that need to be done to make sure ... that democracy reigns and that there's a brighter future for the people of Venezuela."

Sen. Ben Cardin on the crisis in Venezuela

Throughout the turbulent day Saturday, as police and protesters squared off on two bridges connecting Venezuela to Colombia, Guaido made repeated calls for the military to join him in the fight against Maduro's "dictatorship." Colombian authorities said more than 60 soldiers answered his call, deserting their posts in often-gripping fashion, though most were lower in rank and didn't appear to dent the higher command's continued loyalty to Maduro's socialist government.

In one dramatic high point, a group of activists led by exiled lawmakers managed to escort three flatbed trucks of aid past the halfway point into Venezuela when they were repelled by security forces. In a flash the cargo caught fire, with some witnesses claiming the National Guardsmen doused a tarp covering the boxes with gas before setting it on fire. As a black cloud rose above, the activists — protecting their faces from the fumes with vinegar-soaked cloths — unloaded the boxes by hand in a human chain stretching back to the Colombian side of the bridge.

"They burned the aid and fired on their own people," said 39-year-old David Hernandez, who was hit in the forehead with a tear gas canister that left a bloody wound and growing welt. "That's the definition of dictatorship."

Turning to the Middle East, Pompeo asserted that the U.S. was "hopeful that we will have a coalition" in Syria, but added, "I don’t have anything to announce this morning." He stressed that he was confident "Europeans will understand the risk and the threat, and be partners alongside of us."

The White House announced this week it would leave a small residual force of approximately 400 troops in Syria, amid concerns that Trump's previously announced full withdrawal would imperil U.S.-allied Kurds.

"The announcement this week that we’re still going to have a residual footprint inside of Syria makes sense in the context of our mission statement," Pompeo said. "And the tactics will change as time goes on. We’ll use different tactics in different parts of the world to fight back against radical Islamic terrorism. President Trump’s committed to doing that."