At least five Venezuelan troops have abandoned their posts at the country's border with Colombia as confrontations with protesters over incoming humanitarian aid grow more violent by the day.

The soldiers abandoned their watch on Saturday near the Simon Bolivar International Bridge at the Venezuela-Colombian border and reportedly requested assistance from Colombian immigration officials. In nearby Urena, the Venezuelan National Guard fired tear gas and rubber bullets at protesters attempting to cross the border in order to work, BBC reports. Protesters were seen throwing rocks at troops and attacking buses.

At the country's other border in Brazil, four people have been killed as of Friday, and an additional 18 have been injured by colectivos -- armed gang members who support President Nicolas Maduro, according to Alfredo Romero, the director and president of the Venezuelan human rights association Foro Penal.

Demonstrators push a bus that was torched during clashes with the Bolivarian National Guard in Urena, Venezuela (AP Photo/Rodrigo Abd)

ANDY PUZDER: AS VENEZUELA IS DEVASTATED BY MADURO, TRUMP IS FORCEFULLY CONFRONTING THE EVILS OF SOCIALISM

Rising tensions have erupted amid opposition leader and self-declared President Juan Guaido's decision to lead a caravan with thousands of volunteers to the Colombian border to collect at least 200 tons of humanitarian aid, primarily food and medicine. On Saturday, Guaido announced that the first shipment of aid had crossed the border from Brazil, calling it a "great achievement." That statement, however, has been refuted by news that two trucks carrying aid from Brazil are stuck at the Venezuelan border.

Guaido rose to power last month, arguing that Nicolas Maduro's re-election in May 2018 was invalid and marred by vote-rigging.

On Thursday, Maduro announced that he planned to close Venezuela's border with Brazil "totally and completely" to stop the import of humanitarian aid from foreign countries, namely the United States. On Saturday, he announced that all the country's borders would be closing, and severed diplomatic relations with Colombia. 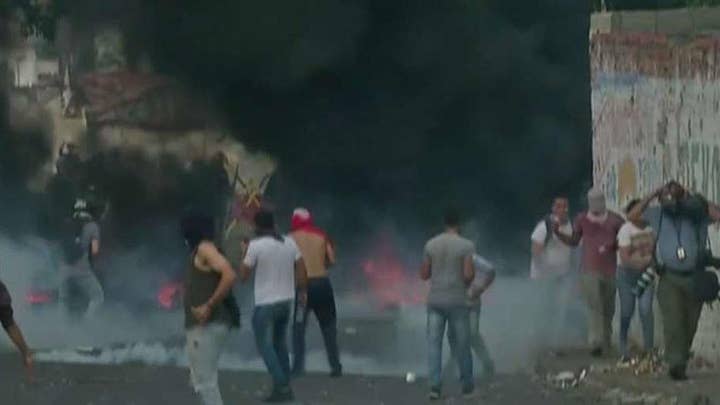 Maduro argued that foreign aid was an attempt by the United States to undermine his authority. The United States has vocalized support for Maduro's opposition, while Maduro has received support from countries such as Russia, Cuba and China.

"What the U.S. empire is doing with its puppets is an internal provocation," Maduro said on Thursday. "They wanted to generate a great national commotion, but they didn't achieve it."

"Let's all take to the streets to defend our independence with conscience and joy," he wrote.

Venezuelans in support of Maduro heeded his request, and began to congregate by the thousands in the country's capital of Caracas to show their support, as his opposition congregates at border crossings.

The decision for Venezuelan troops to abandon their posts at the Colombian border illustrates the conflict posed by pressures from opposing political forces in a time of great economic strife for the Venezuelan people. The United Nations announced in August that more than three million migrants and refugees left Venezuela because of its lack of food and medications.

A demonstrator throws rocks during clashes with the Bolivarian National Guard in Urena, Venezuela, near the border with Colombia, Saturday, Feb. 23, 2019 (AP Photo/Rodrigo Abd)

"I've spent days thinking about this," said one of the soldiers who left his post. The man, whose identity was not revealed, called on other soldiers to join him in abandoning their support for Maduro's socialist government.

"There is a lot of discontent inside the forces, but also lots of fear," he added.