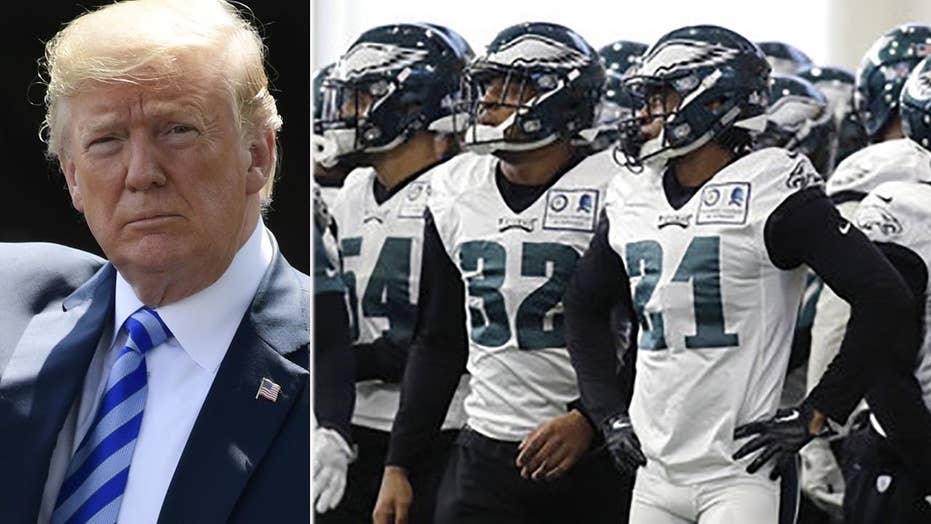 Philadelphia Mayor Jim Kenney slammed President Trump as “not a true patriot” and “a fragile egomaniac” after the Super Bowl Champion Eagles were disinvited from the White House on Monday.

The Eagles were disinvited from the ceremony set for Tuesday amid the national anthem controversy.

Trump said the team is “unable” to attend because they don’t share his view that NFL players should “proudly stand for the National Anthem, hand on heart, in honor of the great men and women of our military and the people of our country."

Kenney criticized the president in harsh terms, saying in a statement that “Disinviting them from the White House only proves that our president is not a true patriot, but a fragile egomaniac obsessed with crowd size and afraid of the embarrassment of throwing a party to which no one wants to attend.”

The mayor celebrated the Eagles, saying he’s proud of the team’s achievements on and off the field.

“These are players who stand up for the causes they believe in and who contribute in meaningful ways to their community. They represent the diversity of our nation — a nation in which we are free to express our opinions,” he said.

The decision to disinvite the whole team marks the end of speculations of whether the Eagles, who won Super Bowl LII in February, would attend the White House in some capacity. The team reportedly wanted to send a small group of players.

“The Philadelphia Eagles Football Team was invited to the White House. Unfortunately, only a small number of players decided to come, and we canceled the event. Staying in the Locker Room for the playing of our National Anthem is as disrespectful to our country as kneeling. Sorry!” Trump tweeted late Monday, reiterating his opposition to hosting the team over politics.

Torrey Smith, a wide receiver who played for the Eagles during the 2017 season, attacked the president’s decision and said he "continues to spread the false narrative that players are anti military."

He added that the players in the team have a wide-ranging views and anyone who wanted to attend the White House “should've been able to go,” but canceling the event was “a cowardly act.”

The White House will still hold a ceremony on Tuesday for a group of 1,000 fans in which Trump said he “will honor our great country, pay tribute to the heroes who fight to protect it, and loudly and proudly play the National Anthem."