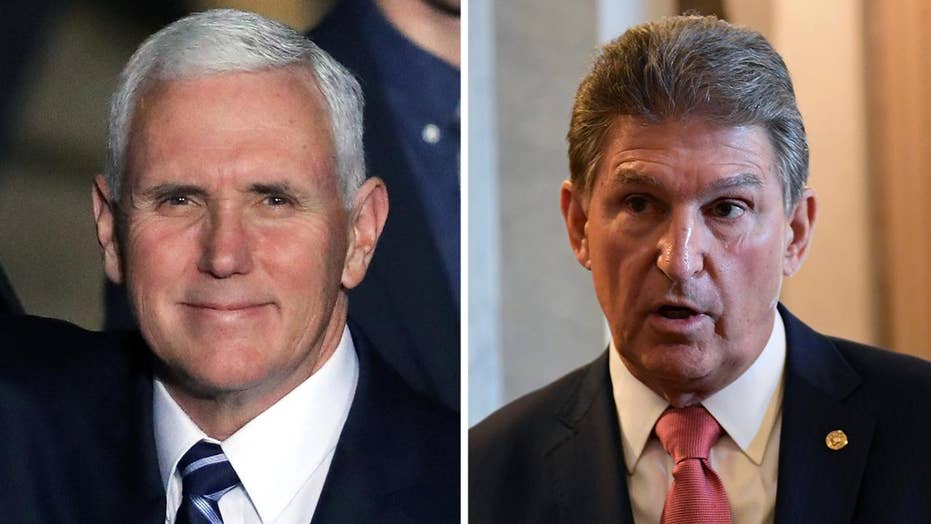 Pence, Manchin square off in Twitter battle over tax vote

Sen. Shelley Moore Capito reacts to the war of words between her West Virginia Senate colleague and the vice president.

Vice President Mike Pence extolled the benefits of recently enacted tax cuts in West Virginia Wednesday, while simultaneously taking rhetorical shots at Democratic Sen. Joe Manchin in a likely preview of what could be a crucial Senate race for both parties.

"When it came to cutting your taxes, Joe voted no," Pence told employees at a White Sulphur Springs truck dealership, adding that Manchin "has voted no time and again on the policies that West Virginia needs."

Pence attacked Manchin for voting against repealing and replacing ObamaCare, defunding Planned Parenthood and promising to vote against an immigration package that includes funding for President Trump's promised wall along the U.S.-Mexico border. Manchin has bucked his party to vote with the GOP in the past, and even said fellow Democrats who refused to stand during Trump's State of the Union address Tuesday were acting "disrespectful." 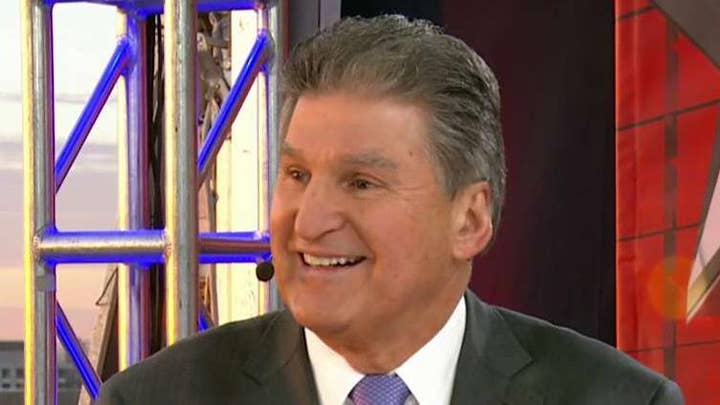 In a statement posted on Twitter, Manchin said he was "disappointed" by Pence's comments and said they were "exactly why Washington Sucks."

"I am shocked that after the Vice President worked for almost a year in a divisive and partisan way to take healthcare away from almost 200,000 West Virginians, bankrupt our hospitals, and push tax cuts for the wealthiest Americans and huge corporations that he would come to West Virginia and continue partisan attacks," Manchin wrote.

Manchin, a popular former governor and the lone Democrat in West Virginia's congressional delegation, is seeking re-election to a second full Senate term this November. Trump won West Virginia by 42 percentage points in November 2016, leading some to speculate that a GOP candidate could ride Trump's coattails to pick up the seat for Republicans.

Pence praised Republican Rep. Evan Jenkins, who attended the speech, for voting for the tax bill. Jenkins is running for Manchin's seat.

"In just the past month, businesses large and small have already committed to invest an extra $425 billion into American enterprises to expand, innovate, to create jobs, to raise wages for their workers," Pence said. "And before this year is out, we believe the typical American worker will see their take-home pay rise by as much as $4,000 a year. That's real results for the American people."

The vice president, speaking at Worldwide Equipment, Inc., added that cuts in taxes and federal regulations prompted CEO Terry Dotson to give bonuses to all the company's 1,100 employees and move ahead with a new dealership in Charleston, S.C.

The $300 bonuses were paid in December when the tax bill was signed, Dotson told the Associated Press. The biggest benefit in the bill was the cut in the corporate income tax rate, he said, which went from 35 to 21 percent.

The vice president singled out Pelosi for more scorn later Wednesday when he addressed GOP lawmakers at a legislative retreat at the Greenbrier resort. He took particular issue with Pelosi's contention that bonuses paid to workers as a result of the tax cuts were "crumbs."

"Let me just remind you all, I come from the JoS. A. Bank wing of the West Wing," Pence said, referencing the popular discount men's clothing retailer. "So, if you're going to say $1,000 is crumbs, you live in a different world than I live in ... Any leader in America who would say $1,000 in the pocket of working families is 'crumbs' is out of touch with the American people."

The vice president also predicted that Republicans would hold the House and Senate in November's midterm elections, despite polls indicating that one or both houses of Congress could be up for grabs.

Pence also spoke briefly about the Virginia crash of the Amtrak train carrying GOP lawmakers to a West Virginia retreat earlier Wednesday. One person outside the train was killed in the wreck. The vice president said Americans were grateful for the lawmakers' service, adding, "We thank God it wasn't worse."