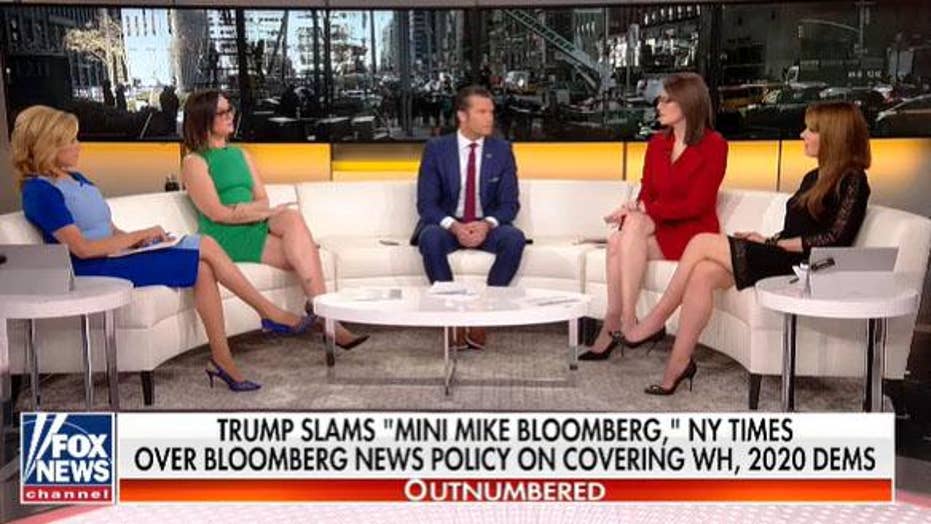 Sen. Elizabeth Warren, D-Mass., has been an outspoken critic of former New York City Mayor Michael Bloomberg's candidacy -- but on Wednesday, she took her message to his own backyard.

During an interview on Bloomberg TV, host Joe Weisenthal acknowledged that his "boss" was running against Warren and asked her if it's "naive" to think that candidates such as Bloomberg, former Vice President Joe Biden and South Bend, Ind., Mayor Pete Buttigieg could champion bipartisanship in 2019 politics. Warren pushed back against the question, citing a "dozen" pieces of bipartisan legislation that have passed since President Trump took office.

She then took aim at her billionaire rival.

"That's why I’m so concerned about Michael Bloomberg jumping into this race, dropping $37 million in one week on ad buys?" Warren continued. "I don’t believe that elections ought to be for sale,  and I don’t think as a Democratic Party that we should say that the only way you’re gonna get elected, the only way you’re gonna be our nominee, is either if you are a billionaire, or if you’re sucking up to billionaires.”

She added, "If that's the case... buckle your seatbelts because that means the government is just gonna work better and better for billionaires."

Bloomberg News was widely criticized after it announced that it would not investigate Bloomberg or any of his fellow Democrats seeking the 2020 presidential nomination.

That decision prompted the Trump campaign to ban Bloomberg News from campaign rallies and events.

"The decision by Bloomberg News to formalize preferential reporting policies is troubling and wrong," Trump campaign manager Brad Parscale wrote in a statement. "Bloomberg News has declared that they won't investigate their boss or his Democrat competitors, many of whom are current holders of high office, but will continue critical reporting on President Trump."

Parscale said he's "accustomed to unfair reporting practices" but noted that "most news organizations don't announce their biases so publicly."