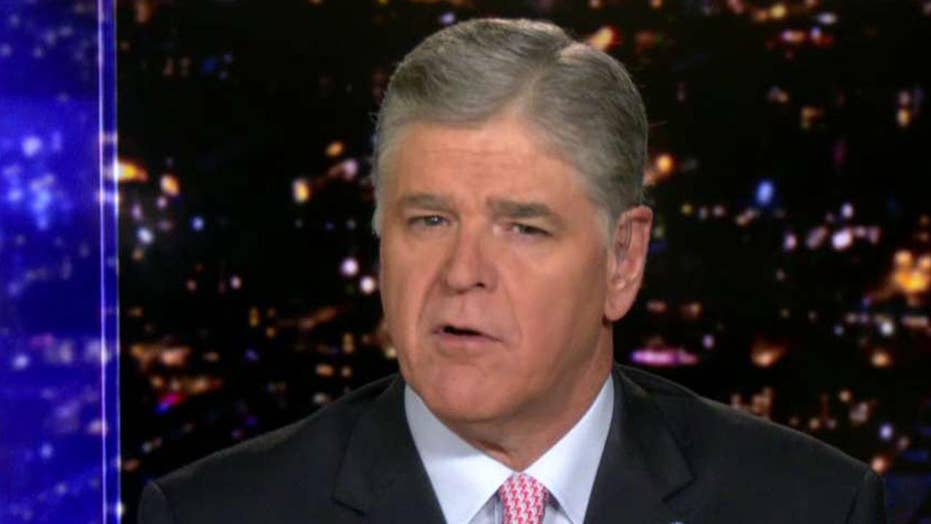 Hannity: Democrats try to educate us on 'virtues' of impeachment

House Democrats bring in law professors to school us about the Constitution.

Sean Hannity reacted Wednesday night to the latest impeachment inquiry hearing, calling it "disastrous" for Democrats and praising Republican members of the House for standing united.

"[Democrats] are hurting the country. They are ripping this country apart just for a cheap, baseless, political hit job," Hannity said during his opening monologue. "And after today's total B.S., if you want to call it, impeachment hearing on Capitol Hill, your blood should be boiling."

Lawmakers and legal scholars sparred earlier Wednesday during the House Judiciary Committee hearing, with Democrats and their three witnesses reviving concerns raised during the Russia probe, and Republicans and their sole witness arguing that the impeachment of President Trump is “predetermined,” “woefully inadequate,” and “dangerous."

"Democrats thought we -- the stupid, smelly Trump-supporting Wal-Mart shoppers that believe in God and America -- need to be educated on the virtues of impeachment," Hannity said. "To educate we the people, the masses of peoples, they hauled in three hyper-partisan, far left, holier than thou, sanctimonious, self-righteous ivory tower law school professors to teach us about the constitution."

"The really good news tonight is, to their credit, Republicans, they were united," Hannity added. "They fought back in a big and effective way."

The host then focused on Stanford University law professor Pamela Karlan, playing a clip of her saying that she had to cross the street to avoid Trump's hotel in Washington D.C.

"Imagine carrying around that much hatred, that much resentment and anger every day of your life. Pretty sad, pretty pathetic," Hannity said. "Not good for the country and frankly, House Democrats. They look really, really stupid."