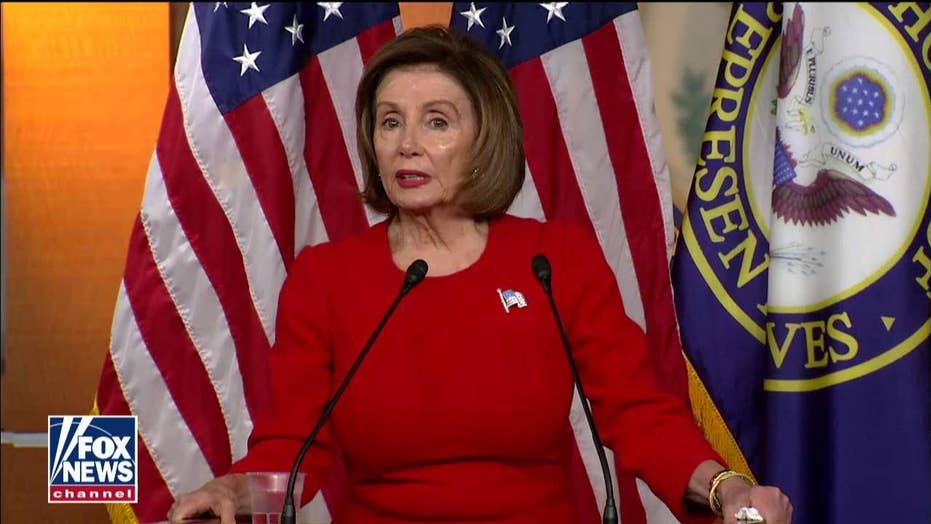 House Speaker Nancy Pelosi accused Sinclair Broadcast Group reporter James Rosen of spouting GOP talking points after he asked a question about the whistleblower at the center of the Trump impeachment inquiry during her weekly press briefing on Thursday.

Rosen pointed out that House Intelligence Committee Chairman Adam Schiff, D-Calif., has said he would do anything necessary to protect the whistleblower’s identity during the ongoing impeachment hearings.

“I wonder if you could explain to the American people, why the legal rights of the whistleblower should prevail in this political setting over those of President Trump, who should ordinarily enjoy a right to confront his accuser?” Rosen asked.

“Well, let me just say this, I will say to you, Mr. Republican talking points, what I said to the President of the United States,” Pelosi said while gesturing to Rosen. “When you talk about the whistleblower, you’re coming into my wheelhouse. I have more experience in intelligence than anybody in the Congress.”

Pelosi then said that she would “vehemently” defend the rights of the whistleblower.

“Any retribution or harm coming to a whistleblower undermines our ability to hear truth about power,” she said.

Rosen, who used to work at Fox News, asked why the whistleblower's rights are more important than President Trump’s.

“Well, the president can come, if he has a case to make, does he want to come speak? Does he want… in writing or speak to the committee about, what might be exculpatory? He has that right,” Pelosi said. “Nobody should have the right to endanger whistleblowers.”

“The question I asked @SpeakerPelosi Pelosi as a reporter for @WeAreSinclair was fair and respectful. Her reply descended to personal insult without addressing the substance, and was accordingly beneath her office. I later asked @GOPLeader tough questions. It’s called journalism,” he wrote.