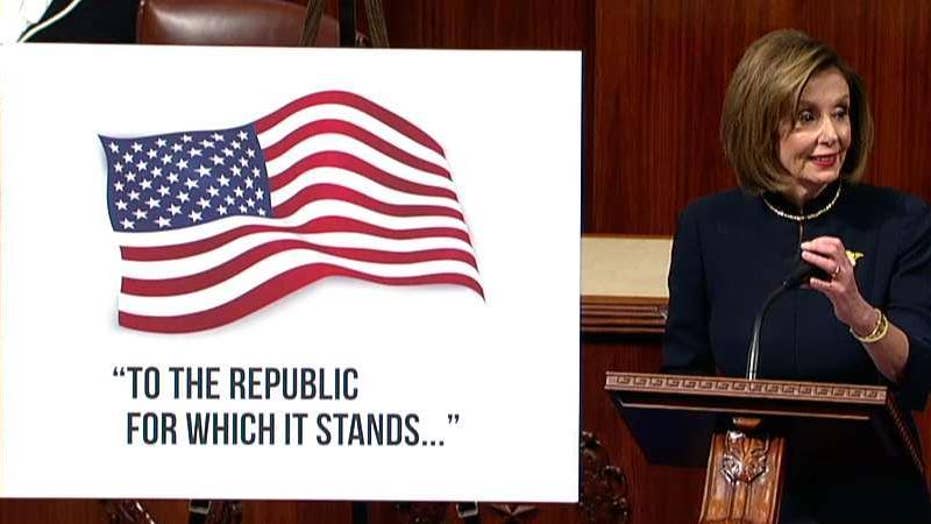 Pelosi opens debate on Trump impeachment: 'He gave us no choice'

House Speaker Rep. Nancy Pelosi delivers an opening statement to the House floor debate on two articles of impeachment against President Trump, calling the president an 'ongoing threat' to national security and the integrity of elections.

House Speaker Nancy Pelosi, D-Calif., and other Democratic female lawmakers wore black and other dark colors on the day that House Democrats planned on exercising what the speaker described as Congress' "solemn" impeachment power against President Trump.

Rep. Debbie Dingell, D-Mich., confirmed to Fox News that some members wore dark colors to mark the tone of impeachment.

“It was informal,” Dingell told Fox News of the coordination. “It’s a somber day.”

Rep. Mary Gay Scanlon, D-Pa., wore a dark navy pants suit with pinstripes. “I actually was curious whether there was going to be a dress code, but not that I’m aware of,” she told Fox News. She said she chose a dark suit for the significant occasion. “It was not a day for partisan colors or celebration. So I think a lot of us felt like it was a day for sober attire," she said.

One of Pelosi's colleagues also told CNN that several female Democrats intentionally wore all black in order to gesture that the day of the impeachment vote was a somber one.

Pelosi, along with Democrat Reps. Alexandria Ocasio-Cortez from New York, Donna Shalala from Florida, Robin Kelly from Illinois and Suzanne Bonamici from Oregon were all seen Wednesday wearing dark outfits. On top of Pelosi's black dress was a golden pin of the Mace of the Republic -- a symbol of the House of Representatives' authority.

Speaking from the House floor on Wednesday, Pelosi declared that Trump violated the Constitution.

"That is why today as speaker of the House, I solemnly and sadly open the debate on the impeachment of the president of the United States," she said.

Rep. Alexandria Ocasio-Cortez, D-N.Y., speaks with reporters, Wednesday, Dec. 18, 2019, on Capitol Hill in Washington. President Donald Trump is on the cusp of being impeached by the House, with a historic debate set Wednesday on charges that he abused his power and obstructed Congress ahead of votes that will leave a defining mark on his tenure at the White House. (AP Photo/Patrick Semansky)

Speaker of the House Nancy Pelosi, D-Calif., holds hands with Rep. Debbie Dingell, D-Mich., as they walk to the chamber where the Democratic-controlled House of Representatives begins a day of debate on the impeachments charges against President Donald Trump for abuse of power and obstruction of Congress, at the Capitol in Washington, Wednesday, Dec. 18, 2019. (AP Photo/J. Scott Applewhite)

The apparent gesture came as House Democrats exercised one of their most contentious powers outlined in the Constitution. After a months-long impeachment inquiry, the House approved two articles of impeachment against Trump.

WHY ARE WOMEN WEARING WHITE TO THE STATE OF THE UNION? DEMOCRATIC LAWMAKERS AIM TO SEND 'LOUD AND CLEAR' MESSAGE

Asked by a reporter at the Capitol if she and Pelosi wore dark colors by design, Ocasio-Cortez said, "Well I think one of the things that our caucus has consistently said is that today is a solemn day for our country."

"(We) laid out over several months what the president has done to essentially extort foreign governments to betray our nation and enrich himself," she said. "So today isn't a day of celebration, but I think it is a day of resolve and a day that we're upholding our oath and our constitutional duty.”

Coordinating outfits wouldn't be out of character for House Democrats.

Rep. Robin Kelly, D-Ill., speaks as the House of Representatives debates the articles of impeachment against President Donald Trump at the Capitol in Washington, Wednesday, Dec. 18, 2019. (House Television via AP)

During Trump's State of the Union address in February, dozens of members wore white to support women's suffrage and protest the administration's alleged attempts to roll back progress for women.

Pelosi and other Democrats previously claimed they didn't enjoy impeaching the president -- a claim that conservatives derided as ridiculous.

"Nancy Pelosi 'feels sad' about impeachment only because she knows this Democrat scam is a generous in-kind contribution to President Trump and every Republican running against a Democrat in a Trump district," the Fox News contributor tweeted. "Too bad she’s too weak to stand up to the angry liberals in her party."