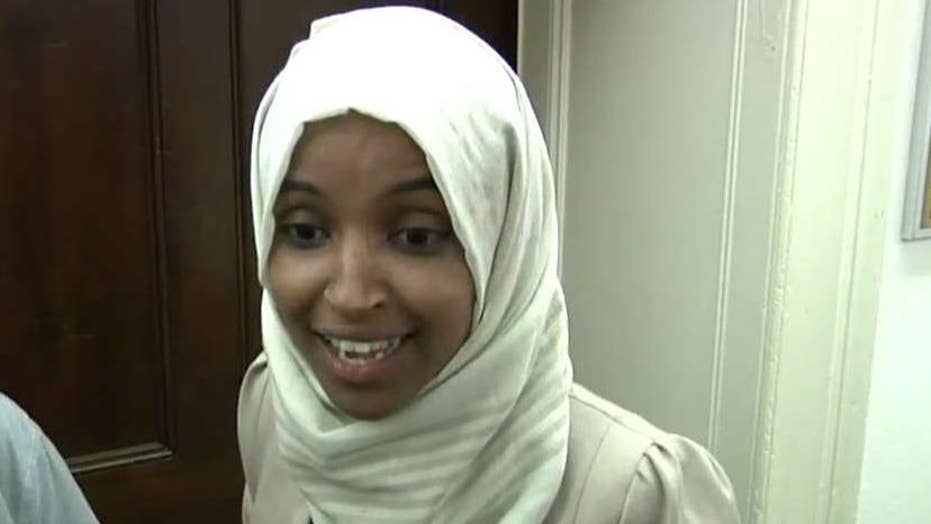 Rep. Omar: Nothing President Trump says should be taken to heart

After the president intensifies his attacks against progressive congresswomen, Democrat Rep. Ilhan Omar says, 'This is our country and we are where we belong.'

Rep. Ilhan Omar promised to continue being President Trump’s "nightmare" as she received a warm welcome in her Minnesota district on Thursday, following a turbulent week in which she repeatedly clashed with the White House.

Hundreds of people greeted Omar at the Minneapolis-St. Paul International Airport, many carrying placards of support for the freshman congresswoman.

Last week, controversy ensued after Trump said that Omar and three other far-left congresswomen – Reps. Alexandria Ocasio-Cortez, Rashida Tlaib and Ayanna Pressley – should “go back and help fix the totally broken and crime-infested places from which they came.”

Critics deemed Trump’s comments racist and divisive particularly as all four congresswomen are American citizens, with three of them born in the U.S. (Omar was born in Somalia.)

TRUMP DISTANCES HIMSELF FROM 'SEND HER BACK' CHANT: 'I DISAGREE WITH IT'

“His nightmare is seeing the beautiful mosaic fabric of our country welcome someone like me as their member of Congress,” Omar added. “We are going to continue being a nightmare to this president because his policies are a nightmare to us.”

“His nightmare is seeing the beautiful mosaic fabric of our country welcome someone like me as their member of Congress. We are going to continue being a nightmare to this president because his policies are a nightmare to us.”

Omar later attended a packed town hall where she pitched the progressive proposal of “Medicare for All” as her supporters gave her a standing ovation.

Before the appearance in her home district, Omar called Trump a “fascist” after a chant “send her back” erupted during a campaign rally on Wednesday, a chant Trump said he disagreed with.

“I believe he is fascist,” Omar told reporters on Capitol Hill, adding that “I want to remind people that this is what this president and his supporters have turned our country that is supposed to be a country that we allow democratic debate and dissent to take place.”