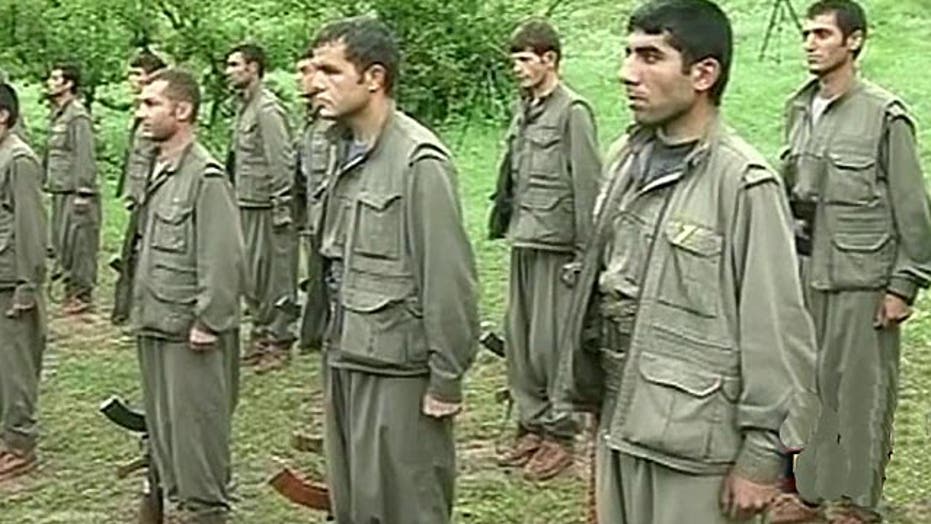 Time for US to take the PKK off terror list?

How would move impact relations with Turkey?

Old geopolitical rivalries are throwing a wrench into U.S. efforts to bring Turkey on board with the mission to "degrade and destroy" the Islamic State in a Syrian border town.

The country's bigger enemy, some analysts say, is still Bashar al-Assad. So why attack the group that is challenging him?

For the time being, fighting in the town of Kobani appears to be at a simmer after intense U.S.-led airstrikes. But Turkey still has not joined the U.S. and its allies in support of Kurdish fighters battling ISIS militants.

Instead, Turkey earlier this week launched attacks on a Kurdish separatist group known as the Kurdistan Worker's Party, or PKK, in the country's southeast for the first time in two years -- after a military outpost was attacked.

The strike underscored the reason that analysts say the U.S. is having a hard time enlisting Turkey to go after ISIS.

To do so, Turkey would have to attack the group fighting its biggest enemy in the region -- the Syrian president. And it would have to help a group -- the Kurdish fighters -- tied to the PKK, which in turn allegedly is backed by Assad.

As Huseyin Celik, a prominent Turkish politician, told The Telegraph in September 2012, "Assad is inclined to view Turkey's foe, the PKK, as a friend."

U.S. officials stressed that the U.S. and Turkey still have common goals.

"I think we would say that the Turkish objective, and our objective in the end with respect to the regime in Syria, is the same," Gen. John Allen, President Obama's special envoy for the anti-ISIS mission, said Wednesday.

State Department spokeswoman Jen Psaki urged "everybody to look at these as separate circumstances" -- referring to the ISIS siege of Kobani and Turkey's strikes against PKK.

But Turkey's attention is elsewhere.

PKK has been at war with Turkey for the past 30 years -- a conflict that has claimed an estimated 45,000 lives -- despite a ceasefire two years ago. Its Marxist-inspired founder, Abdullah Öcalan, has been in jail since 1999 in Turkey. The group has been on the U.S. State Department's foreign terrorist organization list since 1997.

Animosity between Turkey and Syria goes back decades. In 1939, land belonging to Syria in the northwest along the Mediterranean, then called the Sanjak of Alexandretta, was annexed by Turkey and became its southernmost province, Hatay. As a result of acquiring Hatay Province, Turkey remained neutral in World War II. Syria has never recognized the action and has been an enemy of Turkey ever since.

"The Assad family has had a personal vendetta against Turkey," Dr. Michael Izady, professor of Middle Eastern and Western history at Pace University, said.

Part of the Assad family's payback was supporting PKK in their guerrilla war against Turkey starting in 1984. Bashar Assad's father, Hafez, allowed them into Syria and provided them refuge for years -- as they fought for autonomous Kurdistan for Turkey's Kurds.

Here's where it gets interesting:

PKK's Syrian affiliate is known as the Democratic Union Party, or PYD. The Popular Protection Unit, or YPG, is PYD's military wing. YPG now composes the bulk of the fighters in Kobani.

Sherkoh Abbas, chairman of Kurdistan National Assembly - Syria, says this gives Turkey little reason to step up to the plate for the Kurds in Kobani.

"Most PYD and YPG are working on behalf of Assad to manage the Kurds," he said. "Iran and Russia are tied to the groups as well."

PKK has made plenty of enemies. According to some US officials, PKK controls the drug routes through Iran and Turkey and maintains ties with Iran's proxy, Hezbollah, in addition to Assad.

"PKK has committed great acts of terrorism," Izady said. "They are run like the mafia, they are not a national liberation Army -- they are truly horrific."

The complex history and relationships got even more complicated as Secretary of State John Kerry announced Tuesday that the U.S. and Russia -- an ally of Assad -- would "intensify intelligence cooperation with respect to ISIL."

The decision to share intelligence with Russia drew criticism from Michael Doran of the Brookings Institution. "US sharing intel w/Russia so it can share it w/Assad so he can drop barrel bombs on the right women & children," he said in a tweet.

Kerry, perhaps justifying the cooperation with Russia, noted the Islamic State's atrocities against women and girls.

But not everyone agrees that Assad is still supporting PKK and its affiliate in Syria.

"Assad is not supporting YPG [military wing of PYD]," said Mutlu Civiroglu, a Kurdish affairs analyst, in an interview with Fox News. "If that were the case, why didn't he stop ISIS' advance on Kobani?"

Still, he said, the only fighters Turkey is allowing into Syria are "those aligned with ISIS."

Civiroglu touted the role of the YPG and PKK in the current conflicts in the Mideast. He claimed that YPG and PKK units helped end the siege on Mt. Sinjar over the summer alongside the peshmerga from the Kurdistan Regional Government (KRG) in Iraq.

Through all this, the United States government has stood firm in its support of its NATO ally, despite allegations that it is Assad whom Turkey wants to see "degraded and destroyed" -- and not ISIS.

Last week, the Turkish foreign minister said he wants Assad's removal to be one of the coalition's goals. At the State Department, Jen Psaki replied, "That is not the focus of our international coalition and the focus of our efforts."

"The whole thing is a mess," he said.