Obamacare ruling under fire from Democrats and Republicans

Supreme Court calls for restraint in declaring an entire law illegal just because one part of it is; reaction from attorney Robert Henneke and former deputy assistant attorney general John Yoo.

The Affordable Care Act will lose its teeth in 2019, as the penalty for not buying insurance disappears – leaving the health care law’s future as murky as ever.

On one hand, recently released enrollment numbers indicate the system may be able to survive the elimination of the so-called individual mandate penalty – which was stripped as part of last year’s tax overhaul.

While the requirement to buy insurance was considered a crucial part of the original law, enrollment dipped but did not dive in anticipation of that penalty disappearing. The official numbers show enrollment in the 39 states that use the federal exchange declined by 4.2 percent from last year – from roughly 8.8 million to 8.5 million.

“The funny aspect to the individual mandate is that it mostly was [threatening] to penalize people who were already going to buy insurance anyway,” said Robert Graboyes, a senior research fellow and health scholar at George Mason University’s libertarian-oriented Mercatus Center.

In other words, Graboyes said, the vast majority of people who signed up on the government-run portal did not need the threat of a penalty. 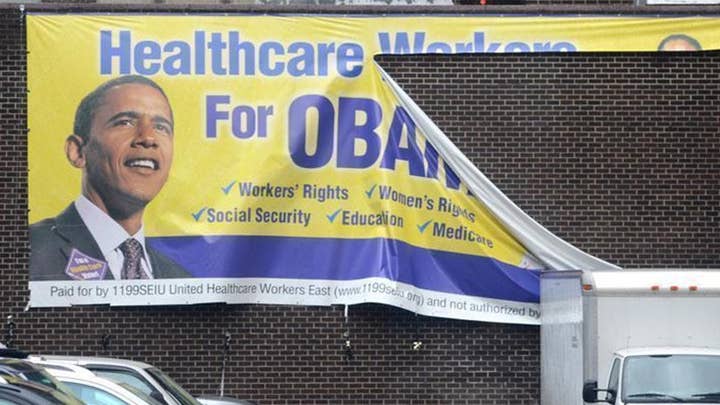 Meanwhile, many people who did not find ObamaCare to be a good deal skipped it and either paid the price or made an excuse. Figures from the Internal Revenue Service show that 4.1 million taxpayers in 2017 paid the penalty for not having insurance in 2016. The federal government collected $2.9 billion in revenue from those taxpayers. Another 10.8 million taxpayers claimed one of many hardship exemptions.

Yet experts said the elimination of the penalty is just one of many factors driving an enrollment decline.

The big question going into 2019 and beyond will be whether that slide will continue, and whether the system will continue to take on sicker customers while losing the young and healthy – creating an imbalance that would threaten higher prices. Add to the mix a recent court ruling against the law, and ObamaCare continues to take hits despite Republicans’ repeated failure to repeal it.

Edmund Haislmaier, a health policy expert at the conservative-leaning Heritage Foundation, said many people who were young and healthy have concluded that insurance simply was not worth it. This is especially true if they had no assets that would be at risk if an emergency caused them to be treated without insurance at a hospital.

“What [the architects of the law] didn’t account for was the behavior of the target population,” he said.

For now, Republican congressional efforts to further dismantle the law – beyond their mauling of the mandate – are dead in the water for at least the next two years, with Democrats taking back the House.

OBAMACARE COULD RETURN TO SUPREME COURT

That legal dispute is tied to the mandate penalty’s elimination.

Back in 2012, the Supreme Court upheld ObamaCare’s individual mandate, ruling that the government could require the purchase of health insurance under its taxing power. But in his recent opinion, U.S. District Judge Reed O'Connor ruled that because the mandate penalty was eliminated, the rest of the law is invalid.

“The remainder of the ACA is non-severable from the individual mandate, meaning that the Act must be invalidated in whole,” O’Connor wrote.

The Affordable Care Act remains in place pending appeal as the law’s defenders vow to preserve it. Speaker-designate Nancy Pelosi blasted the ruling as “absurd.” The case eventually could come before the Supreme Court.

Josh Blackman, a South Texas College of Law Houston professor who has written two books on ObamaCare, said the judiciary must look at what the lawmakers who drafted the plan thought of the mandate. And there is plenty in the record indicating that they believed the law could not work without it, he said.

“We have to look at the mandate and the intent of the 2010 Congress to resolve this question,” he said.

The mandate originally was pitched as a way to get healthy people to sign up for subsidized insurance and offset the costs for others, thus keeping the program’s overall costs in check.

The Congressional Budget Office long had predicted that without the stick of a penalty, millions of people would ignore the carrot of subsidized health care. Last year, the budget forecasters determined that eliminating the mandate would result in 13 million fewer people with insurance by 2027 than if it remained in place. That included 5 million fewer people on Medicaid – even though the program is free to enrollees.

But Cynthia Cox, director of the program for the study of health reform and private insurance at the Kaiser Family Foundation, said polling conducted by her organization indicates many people were not even aware of the penalty.

“The mandate is only as effective as people know about it. … To me, that just seems like a lack of information,” she said.

The penalty itself has risen from its inception. People filing their tax returns in April will have to pay the greater of 2.5 percent of household income or $695 per adult and $347.50 per child if they did not have health insurance for the entirety of 2018. That is far less than the cost of coverage for many people, though.

And come 2019, the penalty imposed on people without insurance will drop to zero when they file their returns in 2020.

Cox pointed to other explanations for the enrollment decline, including an improving economy that has allowed more people to get insurance from employers and the introduction of short-term, limited-duration health plans that are designed to fill insurance gaps when people are between jobs.

Joshua Peck, co-founder of the advocacy group Get America Covered, disputed that the decline is the result of a stronger economy. He noted that the economy has been growing each year the Affordable Care Act has been in place. But he agreed that the new short-term alternatives – what he calls “junk plans” – have played a role.

Peck also blamed the Trump administration for slashing outreach efforts by 90 percent over the past two years. Although “most people are not motivated by the penalty,” he argued, eliminating the mandate has not helped.

“It did have an impact,” he said. “But it isn’t all by itself the most important factor.”