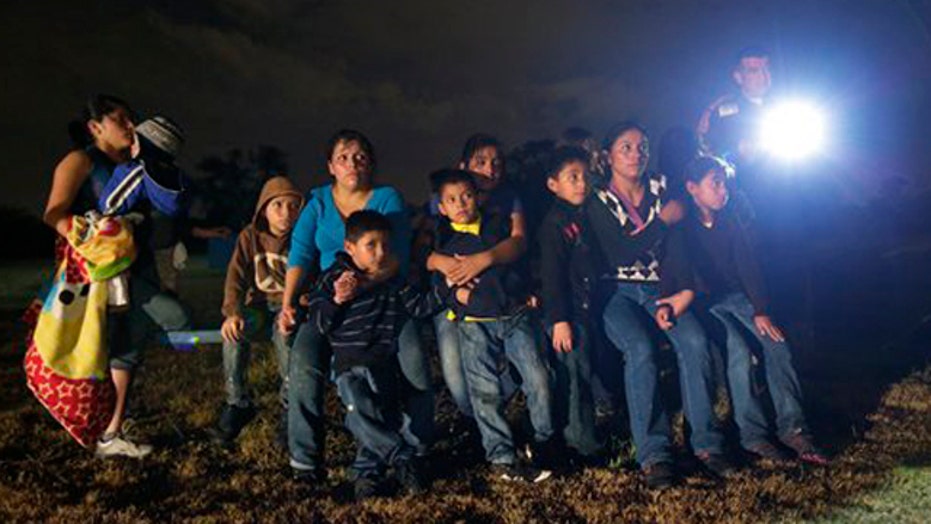 House and Senate lawmakers are running up against an end-of-the-week August recess without a compromise on legislation addressing the border crisis -- potentially playing into the hands of President Obama as he weighs sweeping unilateral action on immigration.

Speculation is widespread about what actions the Obama administration might take on its own, but advocates and lawmakers in touch with the administration tell The Associated Press that the White House is making plans to act to grant work permits to potentially millions of immigrants who are in this country illegally.

The claims have drawn urgent warnings from Republican lawmakers, including Sen. Jeff Sessions, R-Ala., who said such an "amnesty" would be a "permanent stain" on Obama's presidency. Sessions on Monday urged the president to "pull back."

But inaction in Congress on the surge of illegal immigrants along the southern border could fuel Obama's claims that he is compelled to address the issue from the Executive Branch -- even if Republicans say amnesty-style measures could inflame the problem.

While Congress weighs Obama's request for $3.7 billion to deal with the crisis of unaccompanied youths, Senate Democrats are proceeding with their own $2.5 billion bill -- while House Republicans are moving on a significantly scaled-back plan that comes in well under a billion dollars. The House Republican measure would cost $659 million for the remainder of the fiscal year, which ends Sept. 30. The bill includes several policy changes, including using the National Guard to assist the Border Patrol, changing a 2008 law that lawmakers say has made it harder to process illegal immigrant minors from Central America, and authorizing additional judges to hear the cases.

The House may be able to advance their bill in time to send something to the Senate on Thursday, right before the August recess.

The Senate, meanwhile, is trying to move forward on its own bill. But due to the trickiness of Senate procedure, Senate Majority Leader Harry Reid might still be running through procedural hoops come Friday.

Without any compromise bill, both sides of the aisle will be poised for a rhetorical battle during the August recess.

Meanwhile, the Obama administration is weighing its own actions.

Advocates and lawmakers who were in separate meetings Friday said that administration officials are weighing a range of options including reforms to the deportation system and ways to grant relief from deportation to targeted populations in the country, likely by expanding Obama's two-year-old directive that granted work permits to certain immigrants brought here illegally as youths. That program, called Deferred Action for Childhood Arrivals, or DACA, has been extended to more than 500,000 immigrants so far.

Advocates would like to see deferred action made available to anyone who would have been eligible for eventual citizenship under a comprehensive immigration bill the Senate passed last year, which would be around 9 million people.

But White House Press Secretary Josh Earnest, asked about the proposal on Tuesday, would not confirm that it's under consideration.

Obama apparently told advocates in a meeting a month ago to "right-size" expectations, even as he pledged to be aggressive in steps he does take.

That's led advocates to focus on other populations Obama might address, including parents or legal guardians of U.S. citizen children (around 3.8 million people as of 2009, according to an analysis by Pew Research's Hispanic Trends Project) and parents or legal guardians of DACA  recipients (perhaps 500,000 to 1 million people, according to the Fair Immigration Reform Movement).

Another focus could be the potentially hundreds of thousands of people who might be eligible for green cards today if current law didn't require them to leave the country for 10 years before applying for one.

For Obama, the political repercussions of broad executive action on immigration could be unpredictable, and extreme.

Republicans are warning he could provoke a constitutional crisis.

"It would be an affront to the people of this country which they will never forgive, it would be a permanent stain on your presidency," Sessions said on the Senate floor Monday, while urging language to block such executive action be made part of any legislation to address the border crisis.

House Judiciary Committee Chairman Bob Goodlatte, R-Va., announced plans to use an oversight hearing on the U.S. Citizenship and Immigration Services agency Tuesday to raise questions about Obama's plans, which he warned could "worsen the border crisis and encourage many more to come."

On the other side, some Democrats have debated the best timing for Obama to take executive action, raising questions as to whether acting before the midterms could hurt vulnerable Senate Democrats in close races while boosting turnout among the GOP base.

But liberal advocates noted that Obama's move on deferred action two years ago gave him a boost heading into his re-election and could help this year with Latino voters discouraged over the failure of immigration reform legislation and record-high deportations on Obama's watch.