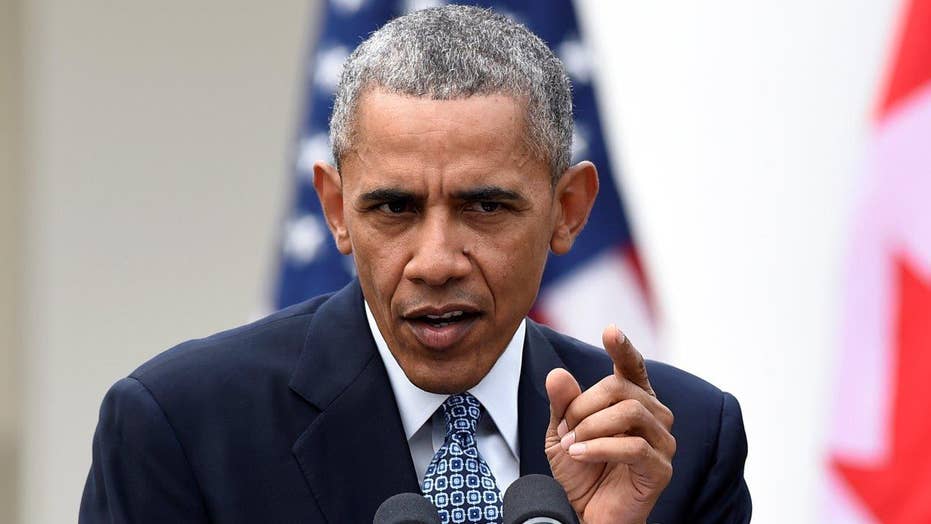 President Obama took a swipe Thursday at what he called the “Republican crackup” happening in the GOP presidential primary race, while pushing back on the notion he may have contributed to the worsening tone of political rhetoric.

The president addressed the 2016 race during a joint press conference at the White House with visiting Canadian Prime Minister Justin Trudeau. Obama also used the forum to renew pressure on Senate Republicans to consider his eventual nominee to the Supreme Court vacancy.

But he scolded the party on several fronts, while reflecting on a question about whether he feels any responsibility for partisanship in Washington and on the campaign trail. On the 2016 race, he said Donald Trump’s immigration positions aren’t all that different from those of the other candidates. And he said he actually wants to see “an effective Republican Party” in part to challenge “blind spots” in his own party.

But he also referred to the current state of affairs on the GOP primary trail as a “circus” and “Republican crackup.”

He also addressed the Supreme Court replacement process, while offering little in the way of hints as to whom he might pick.

“I’m going to do my job, and my expectation is going to be, will the Senate do its job?” he said.

He said he hopes “cooler heads will prevail" and Republicans will back down from a plan to block a Supreme Court nominee.

He spoke as Republicans dug in on their resistance to any Obama nominee, as they argue the decision should be left to the next president.

Senate Judiciary Committee Chairman Charles Grassley said Democrats are only criticizing the strategy to score political points -- and efforts to change his mind are futile.

"I think we need to be crystal clear: It won't work," Grassley, R-Iowa, said in a 15-minute speech. He said Democratic blowback is "all about using this process to score political points, it's that simple."

As for whom Obama might pick, the president said only that he wants an “outstanding jurist” with “impeccable legal credentials” – and who, “by historical standards, would not even be questioned as qualified for the court.”

Yet his pool of potential picks has been shrinking in recent days, with several prominent individuals taking themselves out of the running, including Attorney General Loretta Lynch.

In his search for a replacement for the late Associate Justice Antonin Scalia, Obama is reported to be zeroing in on a small group of appellate court judges with largely traditional credentials and a history of bipartisan backing.

Obama's top tier of candidates include Judge Sri Srinivasan of U.S. Court of Appeals for the District of Columbia Circuit, Merrick Garland, chief judge on the same court, and Judge Paul Watford of the 9th U.S. Circuit Court of Appeals, a source familiar with the selection process told the Associated Press. Ketanji Brown Jackson, a D.C. district court judge, is also under consideration, although a less likely option, said the source.

The Obama-Trudeau meetings Thursday in Washington marked the first official visit in nearly two decades by a Canadian prime minister, a charismatic and youthful liberal leader intent on tight ties with the United States.

At the ornate arrival ceremony on the South Lawn, Obama and first lady Michelle Obama welcomed Trudeau, the 44-year-old son of the late Prime Minister Pierre Trudeau, and his wife, Sophie Gregoire.

"There is no relationship in the entire world like the Canada-U.S. relationship," Trudeau said. "We grew up together."

Despite that close geographical and political alliance, no Canadian prime minister had made an official visit since 1997, a fact that Obama noted.

"It's about time, eh?" Obama said, playing up the American stereotype of a Canadian colloquialism.

Canada is the United States' largest trading partner, with more than $2 billion worth of goods and services crossing the border every day. About 75 percent of Canada's exports go to the U.S.

Besides trade, the two leaders were expected to seek common ground on environmental protection. Before their meeting, the U.S. and Canada said in a statement that they will work to put in place an international agreement in Paris on curbing global warming. They committed to reducing methane emissions by 40 percent to 45 percent from 2012 levels over the coming decade.

Methane is the second most prevalent greenhouse gas emitted in the U.S. from human activities and is much more efficient at trapping radiation than carbon dioxide.

Tall and fit, Justin Trudeau channels the charisma of his father. He aims to restore his father's legacy as leader of the Liberal Party, which was under siege during 10 years of Conservative rule under Stephen Harper, Trudeau's predecessor.

Harper's relations with Obama were strained over various issues, notably the proposed Keystone XL oil pipeline, which the Obama administration rejected last year. The American ambassador to Canada, Bruce Heyman, could not get a meeting with Harper or his Cabinet ministers for months.

But Trudeau's election in October ushered in a new era for Canada's politics that Trudeau, Heyman and others hope will help strengthen relations with the U.S.