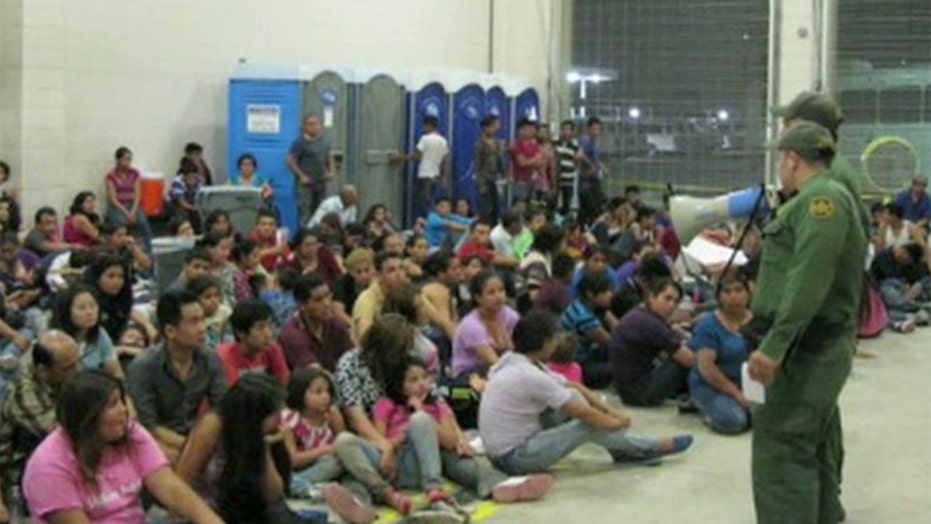 Rep. Jim Bridenstine on the widespread effect of the influx at the border and why he called a trip to an immigration detention facility to the the former Soviet Union

President Obama is holding off on seeking legal changes to speed up the deportation process for illegal immigrant children, but is seeking more money than initially expected from Congress to deal with the crisis on the U.S.-Mexico border.

The president sent a massive $3.7 billion request seeking funds for everything from transportation costs to border enforcement to surveillance to health services.

Officials said they are taking an "aggressive" approach.

At the same time, the administration is said to be moving on a separate track to seek expedited deportations. The administration insists it still plans to seek that authority and officials stressed on Tuesday that those crossing illegally cannot expect to stay in the U.S.

For the time being, the administration is seeking additional funding to handle the tens of thousands of unaccompanied minors now being housed in facilities across the country.

"Supplemental resources are urgently needed," the White House said in a statement.

Republicans have criticized the Obama administration for its immigration policies, claiming they are partly to blame for the influx. But the head of the House Appropriations Committee Hal Rogers, R-Ky., vowed to take a "close and a thorough look" at the latest funding request.

Rogers said "it is clear that additional funding will be needed."

A big chunk of the money -- more than $1 billion -- would go to the Department of Homeland Security to cover transportation costs, beefed-up enforcement efforts and the removal of illegal immigrant adults caught traveling with the children.

Additional money would be for immigration judges, detention facilities, legal aid and other items that could address the situation on the border, which the administration has termed a humanitarian crisis.

As lawmakers return to Washington this week from a week-long July 4 recess, Obama's spending request is set to be a focus, with the Senate Appropriations Committee also scheduling a hearing to examine it. It's not yet clear how lawmakers will react to the request, although aides seem optimistic it will get through the Democratic-controlled Senate in the coming weeks.

More than $600 million of the emergency spending request would go to fight wildfires in Western states.

From its left flank, advocacy groups oppose proposals to speed thousands of unaccompanied minors back home to El Salvador, Honduras and Guatemala. But Republicans in Congress, and some Democrats, want the administration to get tough, and send a message that these illegal immigrants cannot get a free pass to stay in the U.S.

The AP reported that, according to unnamed Capitol Hill aides, the administration decided to submit the spending request apart from the policy changes.

The developments underscore the delicate position the administration finds itself in as it risks alienating allies by pursuing changes to turn the immigrant kids around more quickly. More than 50,000 have arrived since October, in many cases fleeing violence at home, but also drawn by rumors that they can stay in the U.S.

The issue has become a political problem for Obama that looks likely to follow him this week to Texas, where he is traveling primarily to raise money for congressional Democrats.

White House Press Secretary Josh Earnest reiterated Monday that Obama had no plans to visit the border, but Obama faced renewed criticism from Republicans over that decision.

"President Obama needs a wakeup call -- and visiting the border and seeing firsthand the severity of this ongoing crisis is that wakeup call," Sen. John Cornyn, R-Texas, said in remarks prepared for delivery on the Senate floor.