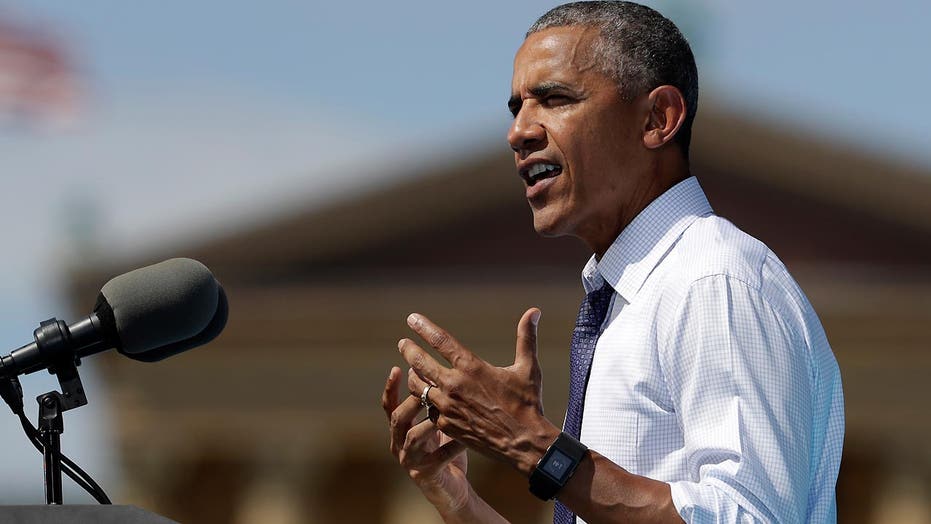 Obama: Trump is not a champion for the working people

President Obama returned Tuesday to the campaign trail to help fellow Democrat Hillary Clinton through arguably the rockiest stretch of her White House campaign, brushing aside the controversies that have dogged her candidacy and assuring voters she's “fit” for office -- as she spends a second day off the trail on doctor's orders.

“You want to debate who is more fit to be our president?” Obama asked the crowd at a rally in Philadelphia. “One candidate [has] traveled to more countries than any secretary of state ever has. ... And the other … isn’t fit in any way, shape or form to represent this country.”

Obama spoke two days after Clinton appeared ill at 9/11 memorial event in New York City, which was followed by her campaign revealing she has pneumonia.

Clinton will return to the campaign trail on Thursday, according to a spokesman.

The incident Sunday, in which Clinton could be seen stumbling as she abruptly left the event, fueled questions from Republicans and others about the 68-year-old Clinton’s health. It also increased calls for her and Donald Trump, her 70-year-old Republican rival, to promptly release more medical records, which each has vowed to do.

But aside from the glancing reference to Clinton being "fit," Obama tried to refocus voters Tuesday on her qualifications and the risk he argues is posed by Trump's candidacy. He sought to portray Trump’s campaign and vision for America as “dark” and “pessimistic” and where people “turn against each other.”

“She treats everyone with respect,” Obama said. “She knows that love trumps hate.” He also referred to her as “a mother and grandmother who will do anything to help our children do better.”

Obama also downplayed the controversy over the Clinton Foundation, saying it has saved countless lives. At the same time, Obama made no reference to another controversy that has hung over her campaign in recent days -- comments Friday that half of Trump’s supporters belong in a "basket of deplorables.”

Trump has hammered Clinton for the remarks and called on her to retract them.

Earlier Tuesday, Republican vice-presidential nominee Mike Pence argued Clinton’s comments were hurtful to Americans. And he again called on her to apologize and fully retract them.

Clinton has expressed regret for making the comments but implied only for saying “half” of the supporters are deplorables.

“I think millions of Americans were shocked and saddened,” Pence, the governor of Indiana, said on Capitol Hill after meeting with House Republicans. “For Hillary Clinton to express such disdain for millions of Americans I think is one more reason that disqualified her to serve in the highest office of the land. So we'll call on her again to apologize and retract her comments.”

Also on Tuesday, the Trump campaign released a statement about Obama's rally that in part stated: "Shouldn't you be at work?" And it suggested he prefers campaiging for Clinton over solving the "major problems facing the country."

While Obama never spoke directly about Clinton’s health or Trump’s controversial remarks about women, Muslims and Mexican immigrants, he suggested several times in his roughly 20-minute speech that Clinton has in her political career -- including her tenure as secretary of state -- repeatedly demonstrated her stamina and that she would swiftly return to the campaign. He called her "steady" and "true."

“She never quits,” Obama said, also arguing that Clinton, as the country’s top diplomat, circled the globe countless times to try to work with other world leaders. “Hillary Clinton is tough.”