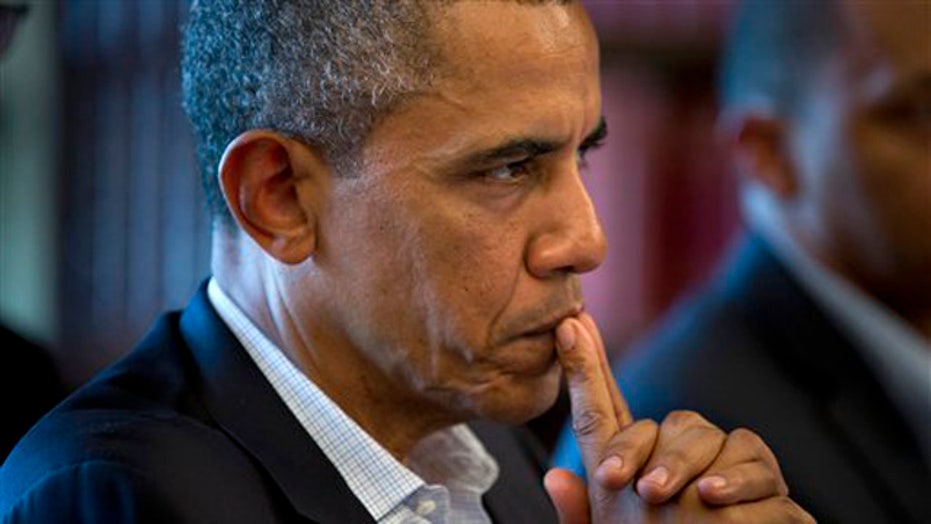 Is Obama a reluctant president?

Karl Rove takes on the political impact of the multiple scandals on president's effectiveness, his silence on Syria

President Obama says the case of Edward Snowden, the government contract worker who leaked documents about two secret data gathering programs, had been referred to the Department of Justice for “criminal investigation” and Snowden’s “possible extradition.”

In an interview with PBS’s Charlie Rose recorded Sunday and broadcast Monday night, Obama said he would not comment on any potential prosecution of Snowden, who is now believed to be in Hong Kong.

“That’s why we set up the FISA court,” he said, referring to the secret court set up by the Foreign Intelligence Surveillance Act that authorizes two recently disclosed programs: one that gathers U.S. phone records and another that is designed to track the use of U.S.-based Internet servers by foreigners with possible links to terrorism.

"We're going to have to find ways where the public has an assurance that there are checks and balances in place ... that their phone calls aren't being listened into; their text messages aren't being monitored, their emails are not being read by some big brother somewhere," Obama said.

Obama is in Northern Ireland for a meeting of leaders of allied countries. As Obama arrived, the latest series of Guardian articles drawing on the leaks claims that British eavesdropping agency GCHQ repeatedly hacked into foreign diplomats' phones and emails with U.S. help, in an effort to get an edge in such high-stakes negotiations.

Obama's announcement follows an online chat Monday by Edward Snowden, the man who leaked documents revealing the scope of the two programs to The Guardian and The Washington Post newspapers. He accused members of Congress and administration officials of  exaggerating their claims about the success of the data gathering programs, including pointing to the arrest of would-be New York subway bomber Najibullah Zazi in 2009.

Snowden said Zazi could have been caught with narrower, targeted surveillance programs -- a point Obama conceded in his Monday interview without mentioning Snowden.

"We might have caught him some other way," Obama said. "We might have disrupted it because a New York cop saw he was suspicious.  Maybe he turned out to be incompetent and the bomb didn't go off.  But at the margins we are increasing our chances of preventing a catastrophe like that through these programs," he said.

Obama also told Rose he wanted to encourage a national debate on the balance between privacy and national security -- a topic renewed by Snowden's disclosures.

Obama, who repeated earlier assertions that the programs were a legitimate counterterror tool and that they were completely noninvasive to people with no terror ties, said he has created a privacy and civil liberties oversight board.

"I'll be meeting with them.  And what I want to do is to set up and structure a national conversation, not only about these two programs, but also the general problem of data, big data sets, because this is not going to be restricted to government entities," he said.

Congressional leaders have said Snowden's disclosures have led terrorists to change their behavior, which may make them harder to stop -- a charge Snowden discounted as an effort to silence him.

"The U.S. government is not going to be able to cover this up by jailing or murdering me," he said. He added the government "immediately and predictably destroyed any possibility of a fair trial at home," by labeling him a traitor, and indicated he would not return to the U.S. voluntarily.

Congressional leaders have accused Snowden of treason for revealing once-secret surveillance programs two weeks ago in the Guardian and The Washington Post. The National Security Agency programs collect records of millions of Americans' telephone calls and Internet usage as a counterterror tool. The disclosures revealed the scope of the collections, which surprised many Americans and have sparked debate about how much privacy the government can take away in the name of national security.

"It would be foolish to volunteer yourself to" possible arrest and criminal charges "if you can do more good outside of prison than in it," he said.

Snowden dismissed being called a traitor by former Vice President Dick Cheney, who made the allegations in an interview this week on Fox News Sunday. Cheney was echoing the comments of both Democrats and Republican leadership on Capitol Hill, including Senate Intelligence committee Chairwoman Dianne Feinstein.

"Being called a traitor by Dick Cheney is the highest honor you can give an American, and the more panicked talk we hear from people like him, Feinstein ... the better off we all are," Snowden said.

The Guardian announced that its website was hosting an online chat with Snowden, in hiding in Hong Kong, with reporter Glenn Greenwald receiving and posting his questions. The Associated Press couldn't independently verify that Snowden was the man who posted 19 replies to questions.

In answer to the question of whether he fled to Hong Kong because he was spying for China, Snowden wrote, "Ask yourself: if I were a Chinese spy, why wouldn't I have flown directly into Beijing? I could be living in a palace petting a phoenix by now."

He added later, "I have had no contact with the Chinese government."

Snowden was working as a systems analyst contractor for NSA at the time he had access to the then-secret programs. He defended his actions and said he considered what to reveal and what not to, saying he did not reveal any U.S. operations against what he called legitimate military targets, but instead showed that the NSA is hacking civilian infrastructure like universities and private businesses.

"These nakedly, aggressively criminal acts are wrong no matter the target. Not only that, when NSA makes a technical mistake during an exploitation operation, critical systems crash," he said, though he gave no examples of what systems have crashed or in which countries.

"Congress hasn't declared war on the countries -- the majority of them are our allies -- but without asking for public permission, NSA is running network operations against them that affect millions of innocent people," he said. "And for what? So we can have secret access to a computer in a country we're not even fighting?"

Snowden was referring to Prism, one of the programs he disclosed. The program sweeps up Internet usage data from all over the world that goes through nine major U.S.-based Internet providers. The NSA can look at foreign usage without any warrants, and says the program doesn't target Americans.

Snowden explained his claim that from his desk, he could "wiretap" any phone call or email -- a claim top intelligence officials have denied. "If an NSA, FBI, CIA, DIA, etc. analyst has access to query raw SIGINT (signals intelligence) databases, they can enter and get results for anything they want," he wrote in the answer posted on the Guardian site. "Phone number, email, user id, cell phone handset id (IMEI), and so on -- it's all the same."

The NSA did not immediately respond to an email seeking comment. But Director of National Intelligence James Clapper has said that the kind of data that can be accessed and who can access it is severely limited.