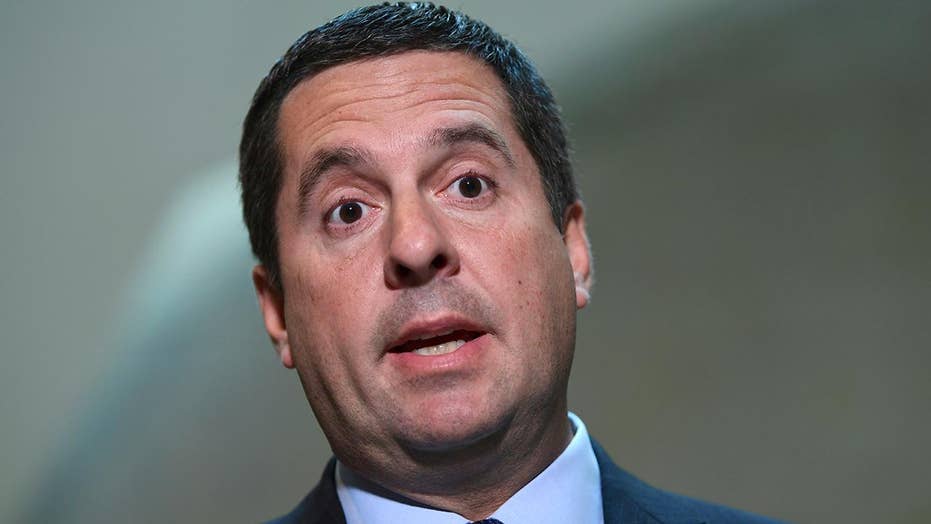 Exclusive - House Intelligence Committee Chairman Devin Nunes is blasting the Department of Justice and the FBI for its “failure to fully produce” documents related to an anti-Trump dossier, saying “at this point it seems the DOJ and FBI need to be investigating themselves.”

In a Thursday letter to Deputy Attorney General Rod Rosenstein obtained by Fox News, Nunes expressed frustration that information and witnesses subpoenaed by the committee in August related to the so-called Steele dossier had not yet been turned over. The salacious dossier includes unverified allegations about President Trump's connections with Russia that he has denied.

“Unfortunately, DOJ/FBI's intransigence with respect to the August 24 subpoenas is part of a broader pattern of behavior that can no longer be tolerated,” the California Republican wrote to Rosenstein.

Nunes demanded that all records – and available dates for witnesses to testify – be provided to the committee by Jan 3.

“As a result of the numerous delays and discrepancies that have hampered the process of subpoena compliance, the committee no longer credits the representations made by DOJ and/or the FBI regarding these matters,” Nunes said.

He called the DOJ’s initial response to the subpoenas “disingenuous at best.”

Nunes said the DOJ informed the House Intelligence Committee several weeks ago that the “basic investigatory documents demanded by the subpoenas…did not exist.”

“As it turns out, not only did documents exist that were directly responsive to the committee’s subpoenas, but they involved senior DOJ and FBI officials who were swiftly reassigned when their roles in matters under the committee’s investigation were brought to light,” Nunes wrote.

Fox News reported this month that Bruce Ohr, a senior Justice Department official, was demoted amid questions about his contacts with the opposition research firm responsible for the anti-Trump dossier.

A Mueller aide, Peter Strzok, a former FBI official, was also removed from the special counsel investigation after a number of anti-Trump texts were discovered on his phone.

Among the information being sought by the committee are reports that summarize meetings between FBI confidential human sources and FBI officials about the Steele dossier.

Nunes previously said he has instructed committee staff to begin drawing up a contempt of Congress resolution for Rosenstein and FBI Director Christopher Wray unless their demands are met.