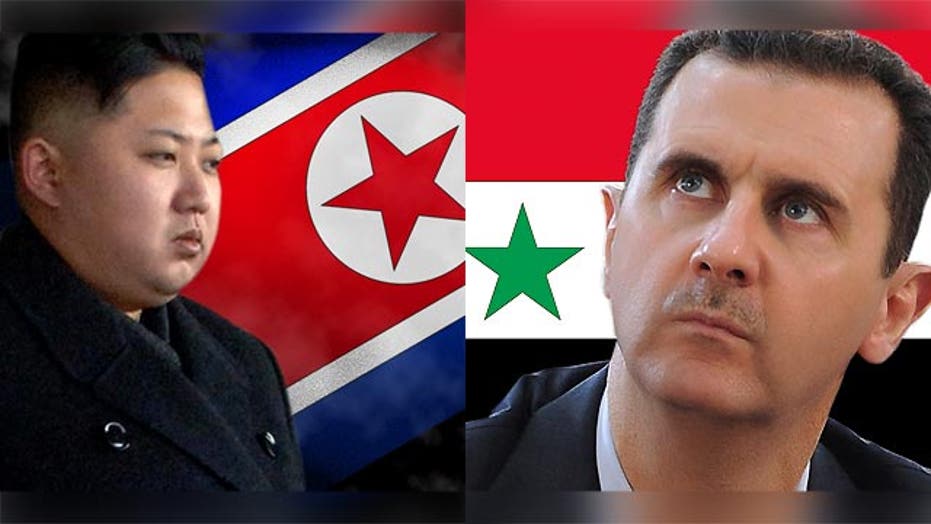 How to deal with issues in North Korea, Syria

WASHINGTON – North Korea's latest outburst of nuclear and military threats has given the U.S. a rare opportunity to build bridges with China -- a potential silver lining to the simmering crisis that could revitalize the Obama administration's flagging policy pivot to Asia.

The architect of the administration's Asia policy described a subtle change in Chinese thinking as a result of Pyongyang's recent nuclear tests, rocket launches and abandonment of the armistice that ended the 1950-53 war with South Korea.

Pyongyang has taken similar actions in the past, prompting Washington to step up military readiness in the region to soothe allies South Korea and Japan. But in an unusual rebuke this week, Beijing called North Korea's moves "regrettable" -- amounting to a slap from Pyongyang's strongest economic and diplomatic supporter.

"They, I think, recognize that the actions that North Korea has taken in recent months and years are in fact antithetical to their own national security interests," former Assistant Secretary of State Kurt Campbell told a panel Thursday at the Johns Hopkins School of Advanced International Studies.

"There is a subtle shift in Chinese foreign policy" toward North Korea, said Campbell, who retired in February as the administration's top diplomat in East Asia and the Pacific region. "I don't think that provocative path can be lost on Pyongyang. ... I think that they have succeeded in undermining trust and confidence in Beijing."

"The issue here is to continue to recognize that the threats we share are common, and the approaches are more likely to be more effective if we can work well together," she told reporters Thursday.

For now, the crisis has given new rise to the White House's decision to bolster U.S. economic and security in the region that for years was sidelined as a priority by war and terrorism in the Middle East and North Africa.

Much of the policy has centered on China -- both in strengthening diplomatic ties and economic trade. But China is an unreliable American ally and has been suspicious about the U.S. entreaty, which it sees as economic competition on its own turf.

Now, North Korea's threats have focused China and the U.S. on a regional security threat instead of an economic rivalry.

"Part of the pivot is to also take a more active interest in the security issues in Asia," Sen. Ben Cardin, D-Md., who chairs a committee overseeing East Asia, said in an interview this week. "And clearly, North Korea is the most difficult country and one that represents security issues for the countries in Asia, as well as indirectly affects U.S. interests."

"With North Korea making these noises, it will require the U.S. to deal with security issues in Asia," Cardin said.

North Korea has ratcheted up an almost daily string of threats toward the U.S., South Korea and Japan and moved a missile with "considerable range" to its east coast, South Korea's defense minister said Thursday. But he emphasized that the missile was not capable of reaching the United States, and officials in Seoul and Washington agree there are no signs that Pyongyang is preparing for a full-scale conflict.

Last year, North Korea launched two long-range rockets -- it claims they were satellites but were widely believed to be missiles -- and in February announced it conducted an underground nuclear test. A month later, the country declared its 1953 armistice with South Korea void. And this week, Pyongyang said it would restart a shuttered nuclear reactor and ramp up production of atomic weapons material, and began turning away South Korean workers from jointly run factories in the North.

Much of the bellicosity is seen as an effort to shore up loyalty among citizens and the military for North Korea's young leader, Kim Jong Un. But U.S. and U.N. sanctions against Pyongyang after the February nuclear test fueled tensions and began the unusually high level of threats.

It's also a response to annual U.S.-South Korean military drills that -- intentional or not -- antagonize the North. The ongoing drills have shown a conspicuous display of firepower, including flying American bombers and fighter jets in recent weeks over South Korea and off the Korean peninsula's coast, where a U.S. missile-defense ship also has been deployed.

North Korea's military issued a statement saying its troops have been authorized to counter U.S. "aggression" with "powerful practical military counteractions," including nuclear weapons. Experts doubt Pyongyang is able to launch nuclear-tipped missiles, although the extent of its nuclear arsenal is unclear.

China historically has been lax on enforcing international sanctions against the North. But in what the U.S. took as a positive development, China signed on to stiffer measures in the latest round of U.N. Security Council sanctions announced after the February nuclear test, and there are initial indications that it's increasing cargo inspections. Whether this will lead to concrete steps that will crimp North Korea's weapons' programs and illicit trade in arms, however, remains to be seen.

Patrick Cronin, an Asia expert at the Center for a New American Security and a senior State Department official during the George W. Bush administration, said Beijing also is helping set up back-channel negotiations with North Korea to ease the tensions.

But ultimately, he said, the U.S. isn't likely to succeed in winning China over as a reliable partner against North Korea beyond the current flare-up.

"There is an opportunity for the U.S. and China to renew cooperation on a North Korean strategy," Cronin said. "But we can't put all of our hopes on that cooperation, because it's been less than satisfying in the past.  There are limits to how far China and the U.S. have coincidental interests with regard to North Korea. But it's not enough -- because, more likely, we're likely to fail."

Asia expert and peace activist Hyun Lee agreed that Washington will be unlikely to turn Beijing against North Korea in the long run. But she said China does not want to see a stepped-up U.S. military presence in the region, and Beijing certainly doesn't want a war on its borders.

China "doesn't want to deal with headaches like the tension between the U.S. and North Korea," said Lee of the Working Group for Peace and Demilitarization in Asia and the Pacific. "I think China is trying to restrain both sides."