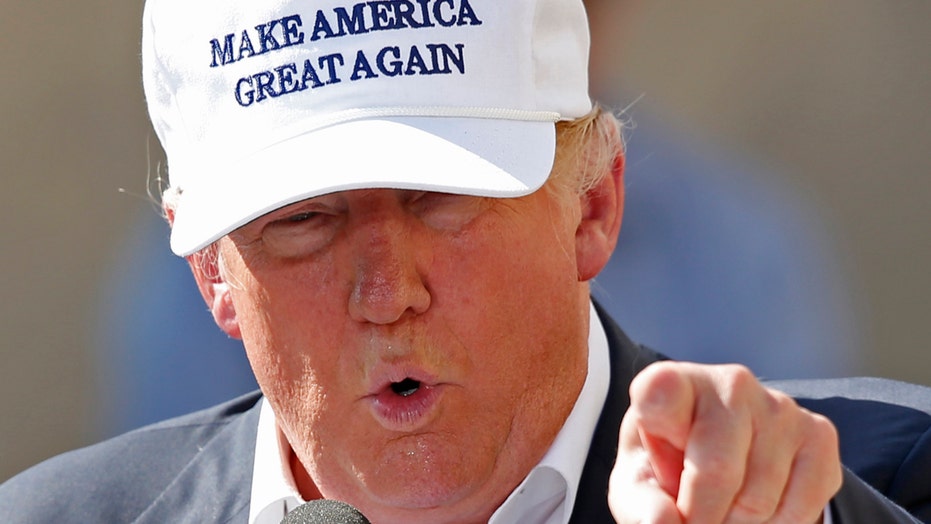 Will Trump announce his VP pick before the convention?

On the roster: No rose for Christie? Veep elimination round continues - Power Play: Brat the giant killer on Trump and conservatism - Anti-Trump scrap starts in Cleveland today - Audible: Walled off - Lobster roll out

NO ROSE FOR CHRISTIE? VEEP ELIMINATION ROUND CONTINUES
It doesn’t seem like Chris Christie will get a rose from Donald Trump today.

The de facto Republican nominee has been meeting personally or appearing in public with those on his list of potential running mates before crossing off their names. Trump had face time with Sens. Bob Corker and Joni Ernst before each of them stepped forward that they would not be going on the final round of the contest.

Also out is springtime favorite Oklahoma Gov. Mary Fallin, who said she hasn’t been vetted by Team Trump.

And after some time on the trail with former House Speaker Newt Gingrich, Trump seemed to pour cold water on the idea of a Trump/Gingrich ticket, saying Gingrich would be part of a hypothetical Trump administration “in one form or another.”

Today would seem to be Christie’s turn for being let down easy as the two men campaign together in Virginia Beach. Christie would go home from the reality show before the finals but with some lovely parting gifts and, perhaps, a promise that he would be part of a Trump team. But Christie, widely disliked in his own party and unpopular in his home state, doesn’t bring Trump anything he can’t get better and cheaper elsewhere.

Now, Trump might still pick Christie or Gingrich or really anyone. Anytime that it’s within the realm of discussion that a nominee would pick his own child as a running mate we don’t want to close any doors too hastily. Would anyone be too surprised to find out that Trump ripped up his list and started over even at this late date?

But the list, at least for purposes of public consumption, seems to be winnowing down to a few people, or at least concepts.

One is a play for the religious conservatives in the GOP base, embodied by former congressman now Indiana Gov. Mike Pence. This would be an almost inexplicably bad choice for Trump, inviting as it does unflattering comparisons while simultaneously turning off moderate and liberal voters who Trump would need.

Another option getting traction is the idea of trying to reassure voters that Trump can be a suitable commander in chief by twinning him with a military man. It’s sort of the running mate as testimonial: “I trust him with first-strike nuclear launch authority, and you can too.”

The avatar for this idea is former Defense intelligence boss retired Gen. Michael Flynn. Flynn is a Democrat, which is a help for Trump. And, presumably, his blood-curdling rhetoric on ISIS, Islamism and Barack Obama would go a long way in placating the GOP base.

But Flynn’s apocalyptic warnings don’t help Trump with the overwhelming perception that he is hot headed. And generals are usually bad at politics and have a 20th century track record as boat anchor running mates. Trump forerunners George Wallace and Ross Perot both picked retired military leaders and both were no help.

And given how Hillary Clinton is homing in on Trump’s admiring statements about dictators and authoritarians, Flynn’s own Kremlin coziness would be decidedly unhelpful. Trump has enough trouble on that front without putting it right there on the ballot.

There’s also the idea of bringing on an old Washington hand like Gingrich but with less baggage. That idea is best personified by Sen. Jeff Sessions, R-Ala., Trump’s first endorser from the Senate and the author of Trump’s immigration plan. Sessions shares Trump’s populist zeal against free trade and certainly would affirm Trump’s conservative pledges on the Supreme Court.

But he also doesn’t help Trump broaden his appeal, with shades of 1964 GOP vice presidential nominee William Miller who reinforced Barry Goldwater at the top of the ticket but otherwise faded from public view. Sessions is no retail politician.

There is one potential Trump stump mate, though, who takes a little from all of the columns above: Rudy Giuliani. The former New York mayor is a risky pick in the sense that he has plenty of baggage and is a social moderate who famously flopped with GOP voters in 2008.

But Giuliani provides credibility on national security issues in the same way as a general might but does so with a better set of communications skills. And, importantly, he helps present Trump in his natural habitat.

Having a presidential candidate who is about as subtle as a New York Post headline is jarring for voters, but Giuliani can act as something of a translator. Warm up this phrase: “I think what Donald was getting at…”

And Giuliani can point to his success in New York that he can help Trump run the federal government.

Trump has as much as a week to make his final choice, and it could be someone from way, way out there, but he might do well to choose Giuliani, who can be his ambassador from the Big Apple.

TIME OUT
Complaints abound about baseball these days: too slow, not enough offense, and eternal season. But could it be that people are doing fandom wrong? MLB Network host, Brian Kenny suggests in his new book, “Ahead of the Curve: Inside the Baseball Revolution,” how analytics have not only changed the game, but how the way we perceive and appreciate it needs to change as well. He joins Chris Stirewalt for a quick, Time Out. WATCH HERE.

Perino & Stirewalt - The fastest-growing news podcast has no name but lots to discuss after a maelstrom week in news that started with Hillary Clinton skirting criminal charges and ending with the attack in Dallas. Dana Perino provides pointed perspicacity and Chris Stirewalt talks (and talks) about everything from Plato to the veepness.  LISTEN AND SUBSCRIBE HERE.

ANTI-TRUMP SCRAP STARTS IN CLEVELAND TODAY
David Drucker is on the scene in Cleveland with the latest on the last ditch effort to deny Donald Trump the Republican nomination or at least make their voices heard: “Republican delegates plotting against Donald Trump arrive in Cleveland this week to make a final stand against his nomination. The anti-Trump forces face long odds in their bid to block the New York businessman from formally accepting the Republican presidential nomination in a vote of delegates on the convention floor. Randy Evans, a Georgia delegate whipping for Trump, tells the Washington Examiner that 888 delegates are committed to Trump, and another 901 are loyal to Republican National Committee leadership, which steadfastly supports Trump. If accurate, Trump has well more than the 1,237 delegates needed to secure the nomination — regardless of whether they vote their conscience or are bound to the winner of the primary in their state.”

[What to watch for - The Hill lays out the five things to watch on today’s rules meeting agenda that are most important for the party platform and its presumptive nominee, as well as for those planning to run for president in 2020.]

SANDERS SUPPLICANT IN NEW HAMPSHIRE
Time: “Sen. Bernie Sanders of Vermont will join Hillary Clinton at a campaign rally in New Hampshire on Tuesday, where he is expected to endorse his former rival. Sanders is joining Clinton at Portsmouth High School to ‘discuss their commitment to building an America that is stronger together,’ according to a Clinton campaign release, but the self-proclaimed Democratic socialist is expected to formally endorse Clinton at the event. Sanders beat Clinton during a primary contest in the Granite State by 22 percentage points.”

Potential Clinton running mate Perez says she needs to earn voters’ trust back - Fox News: “Labor Secretary and potential Hillary Clinton running-mate Tom Perez acknowledged Sunday that the presumptive Democratic presidential nominee ‘has some work to do’ to regain voters’ trust before the November election, even after the Justice Department concluded its investigation last week into her email scandal…‘She made a mistake,’ Perez told ‘Fox News Sunday.’ ‘And she acknowledges that she has to earn the trust back.’”

PLAY-BY-PLAY
Poll: majority disapproves of Evan Bayh to run for Senate - The Hill

Republicans warn Clinton email scandal not over yet - WaPo

AUDIBLE: WALLED OFF
“Well, it’s not. It’s a wall. But it’s a technological wall. It’s a digital wall. There are some that hear, ‘This is going to be 1,200 miles from Brownsville to El Paso. 30 feet high.’ And listen, I know you can’t do that.” -- Former Texas Gov. Rick Perry in an interview with SnapChat about Trump’s proposed wall between the U.S. and Mexico.

FROM THE BLEACHERS
“As a longtime ‘addict’ to Fox News, I suggest that you consider something that I find troubling.Would you please address a factor, which for some strange reason, is often un-noted. When a poll indicates a +6% margin for a candidate, a 3% change will result in a tie race. It’s a simple arithmetic fact. The typical +/- 3% error avg. reflects the fact but is never pointed out or discussed. I’m not nitpicking, but I do believe it would add to the validity of any discussion of the poll findings and perhaps have positive influences on voters. As a matter of honesty, I support Trump for President. I would appreciate knowing your thoughts or comments.” – Bob Shaw, Georgetown, Texas

[Ed. note: You know what they say about lies, damned lies and statistics…and if anything helps feed the skepticism that laypeople have about public opinion research it is that old rascal “margin of error.” Polls are not perfect. If you wanted a perfect poll of the American electorate you would need to talk to about 140 million people this year, but with a survey of 1,000 people or so, you can get a good idea of what the larger population thinks. But there will be a, you guessed it, margin of error. We want to be careful not to extrapolate too much from those margins. The poll result reflects the best finding and is, of course, an imperfect snapshot of the population the moment the poll was conducted. Polling involves so many variables and assumptions that we should take the results not as Gospel truth, but as insights on a murky world. Especially with four months until the election we should be looking at polls for trends and demographic insights, not predictions.]

LOBSTER ROLL OUT
CBC: “More than 600 pounds of lucky lobsters were spared the pot Saturday, thanks to compassionate monks on Prince Edward Island [Canada]. The monks bought the lobsters from various places around the Island, said Venerable Dan of the Great Enlightenment Buddhist Institute Society in Little Sands. On Saturday, they boarded a fishing boat and released them back into the ocean off the coast of Wood Islands. ‘Hopefully, we can find a spot where there are no cages waiting for them,’ said Dan. The purpose is to cultivate compassion not just for the lobsters, but for all beings, he said. Buddhist monks sprinkle purified water on eight crates of lobsters before setting them free on Saturday.”