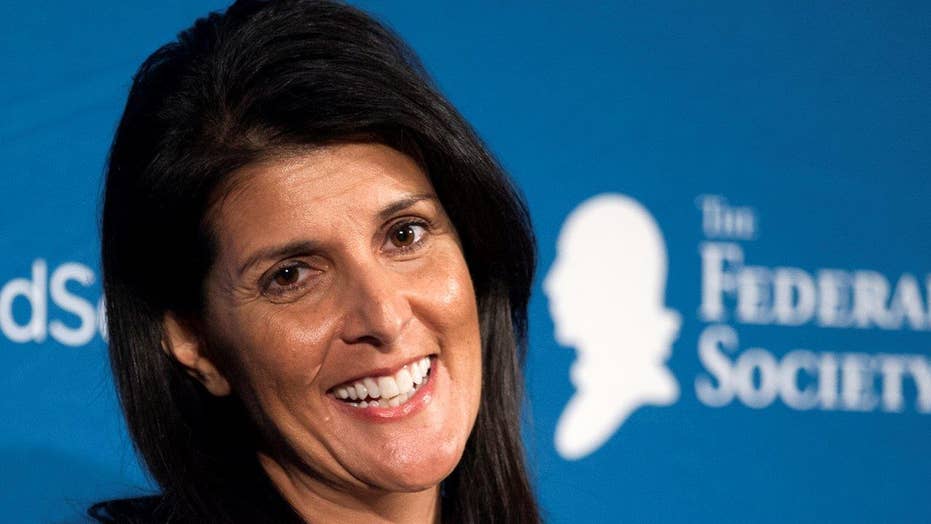 South Carolina Gov. Nikki Haley was on offense Wednesday during her confirmation hearing to become United Nations ambassador, blasting the U.N. for its treatment of Israel and taking a tough line against Russia.

Haley, during her testimony before the Senate Foreign Relations Committee, also questioned the disproportionate funding the U.N. receives from the U.S., asking if America is "getting what we pay for?"

“We contribute 22 percent of the U.N.’s budget, far more than any other country,” Haley said. “We are a generous nation. But we must ask ourselves what good is being accomplished by this disproportionate contribution."

President-elect Donald Trump has been a ferocious critic of the U.N. and just as fierce an advocate for Israel during his brief political career, and Haley echoed those principles.

“Nowhere has the U.N.’s failure been more consistent and more outrageous than in its bias against our close ally Israel,” Haley said.

She added: “I will not go to New York and abstain when the U.N. seeks to create an international environment that encourages boycotts of Israel. I will never abstain when the United Nations takes any action that comes in direct conflict with the interests and values of the United States.”

Those remarks come on the heels of a controversial December abstention by the U.S. during a Security Council vote that called on Israel to stop building settlements. The move – or lack of one – was heavily criticized by Israeli leaders and also faced condemnation from many domestic politicians, including Trump. Though the U.N. has been historically hostile to Israel, U.S. policy has typically had America stand with the Jewish democracy.

While Trump -- and to some extent Secretary of State nominee Rex Tillerson -- has been relatively loathe to criticize Russia and President Vladimir Putin, Haley did not shy away from calling the Kremlin's actions in Syria "atrocities" and agreed with Sen. Bob Menendez, D-N.J., that some bombings in Aleppo constituted "war crimes." She also said Russia's incursion into Crimea was "a big concern."

"I think Russia is going to continue to be at the forefront of a lot of issues that we have to deal with," Haley said.

During her opening remarks, Haley admitted she was a novice at international diplomacy but noted "diplomacy itself is not new to me," highlighting her experience as governor bringing together people with different backgrounds, viewpoints and objectives.

Haley named Syria, Iran and North Korea as the "world's worst human rights abusers" and said the American people were "fed up" with the U.N.'s inability to affect real change in countries of concern.

"The time has come for American strength once again," she said.

Haley also spoke about the importance of human rights at home and abroad.

"This administration and I don't think there should be any registry based on religion," Haley said.

While Haley is not thought to be a major target of Democrats looking to derail some of Trump’s Cabinet picks, her hearing could end up being a repeat of Tillerson’s tense Senate appearance last week.

“I think she’ll get many of the same questions Mr. Tillerson did,” Sen. Jeanne Shaheen, D-N.H., said prior to the hearing. “It will be interesting to hear how she handles those questions differently.”

The South Carolina-born daughter of Indian immigrants, Haley at 38 became the nation's youngest governor in January 2011 and was easily re-elected in 2014. She turns 45 on Inauguration Day.