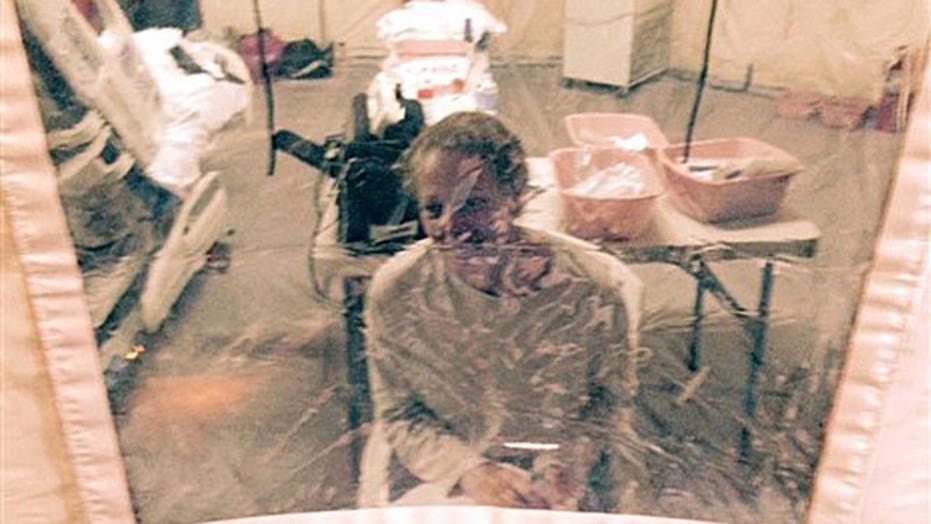 A nurse who treated Ebola patients in West Africa before being briefly and controversially quarantined in New Jersey could be the focus of a new battle over state health policy as she returns to her home state of Maine.

Kaci Hickox left a Newark hospital on Monday and was expected to arrive in the northern Maine town of Fort Kent early Tuesday. Maine health officials have already announced that Hickox is expected to comply with a 21-day voluntary in-home quarantine put in place by the state's governor, Paul LePage.

However, one of Hickox's lawyers, Steve Hyman, said he expected her to remain in seclusion for only the "next day or so" while he works with Maine health officials. He said he believes the state should follow the Centers for Disease Control and Prevention guidelines that require only monitoring, not quarantine, for health care workers who show no symptoms after treating Ebola patients.

"She's a very good person who did very good work and deserves to be honored, not detained, for it," he said.

LePage defended the quarantine in a news release Monday, saying that state officials must be "vigilant in our duty to protect the health and safety of all Mainers." Adrienne Bennett, a spokeswoman for the governor, told the Portland Press Herald that authorities would take "appropriate action" if Hickox does not comply with the quarantine, though she did not specify what that action might be.

"Upon the healthcare workers' return home, we will follow the guidelines set by the U.S. Centers for Disease Control for medical workers who have been in contact with Ebola patients," LePage's statement continued. "Additionally, we will work with the healthcare worker to establish an in-home quarantine protocol to ensure there is no direct contact with other Mainers until the period for potential infection has passed."

A spokeswoman for Northern Maine Medical Center in Fort Kent told the Associated Press that the facility is ready to care for an Ebola-infected patient, if necessary. Hickox and her boyfriend, Ted Wilbur, recently moved to Fort Kent, where Wilbur is a nursing student at the University of Maine branch in the town.

WAGM-TV reported late Monday that school officials had offered Wilbur the option of staying in on-campus student housing for the duration of the quarantine period or suspending his studies so that he could stay with Hickox in his off-campus home during that time. A University of Maine system spokesman told the Associated Press that he couldn't confirm details of discussions with Wilbur.

Hickox, who volunteered in Sierra Leone with Doctors Without Borders, spent the weekend in a quarantine tent in New Jersey despite having no symptoms other than a slightly elevated temperature she blamed on "inhumane" treatment at Newark Liberty International Airport.

Hickox said she never had symptoms and tested negative for Ebola in a preliminary evaluation. She was the first person forced into New Jersey's mandatory quarantine for people arriving at Newark Liberty from Sierra Leone, as well as Guinea and Liberia.

New Jersey Gov. Chris Christie and New York Gov. Andrew Cuomo were sharply criticized for ordering mandatory quarantines. But Christie said Monday that his priority is protecting the health of people in his state.

Also Monday, Connecticut joined New York and New Jersey in announcing that anyone coming to the state after traveling from Sierra Leone, Guinea, and Liberia would face at least 21 days of mandatory monitoring involving daily contact with state health officials. The Associated Press reported that eight people are currently being quarantined in the state who have not shown any symptoms of the virus, while a ninth person was released from quarantine Monday.

The latest controversy comes a day after the U.S. Army unilaterally imposed a mandatory 21-day quarantine on troops returning from the Ebola hot zone in West Africa and the Joint Chiefs of Staff recommended that the other branches of the military follow suit. That recommendation is counter to White House policy, though spokesman Josh Earnest would not comment Monday on whether President Obama agreed with the recommendation.

Over the weekend, the White House put pressure on New Jersey and New York over their quarantine policies. But it remains unclear where the White House and Defense Secretary Chuck Hagel stand on applying that standard to returning U.S. servicemembers.