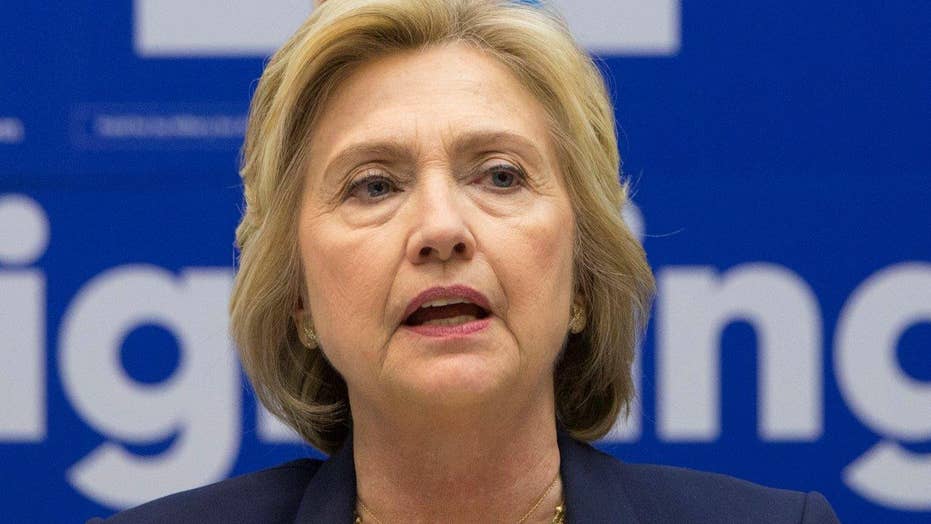 On 'America's Newsroom,' Judicial Watch lays out what's in their latest email release

A new set of State Department documents released Thursday by the watchdog group Judicial Watch reveal then-Secretary of State Hillary Clinton made the choice not to use a secure phone line amid a technical problem and acknowledged the risk of using a private Blackberry phone.

The documents contain a Feb. 22, 2009, email exchange between Clinton and her then-Chief of Staff Cheryl Mills attempting to communicate over a secure line after Clinton returned from an overseas trip.

When there were issues setting up a secure communication, Clinton wrote to Mills, “I called ops and they gave me your ‘secure’ cells… but only got a high-pitched whining sound.”

Mills then suggested that Clinton try the secure line again, but the former secretary wrote back, “I give up.  Call me on my home #.”

Clinton's choice not to use a secure phone line is similar to a previous June, 17, 2011 email exchange with then-State Department deputy chief of staff Jake Sullivan, where she directed him to strip the classification markings of sensitive talking points and send through non-secure fax.

"They say they've had issues sending secure fax. They're working on it," Sullivan wrote to Clinton.

"If they can't, turn into nonpaper w no identifying heading and send nonsecure," Clinton responded.

In a separate email from Feb. 27, 2008 released Wednesday, Clinton apologized to health care activist/physician Mark Hyman for failing to respond to a message because, “no blackberry contact permitted in my office.”

The documents were obtained in response to a court order from a May 5, 2015 lawsuit filed against the State Department after it failed to respond to a March 18 Freedom of Information Act request.