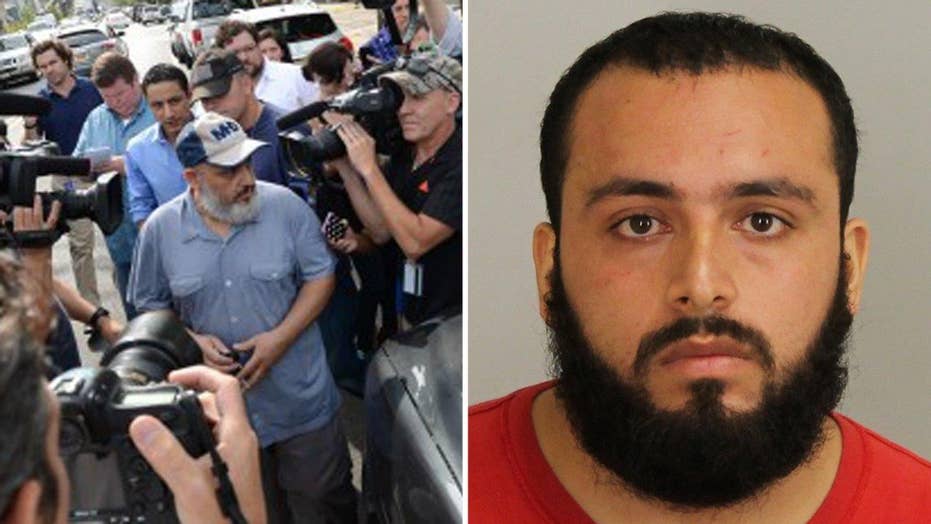 The father of Ahmad Khan Rahami suspected his son had been radicalized after several trips to Pakistan and Afghanistan; Rick Leventhal provides insight into the investigation for 'Special Report'

A long-time Elizabeth, N.J., businessman and neighbor of accused bomber Ahmad Khan Rahami told Fox News Tuesday, “I have known him for such a long time, he was not alone. There is no way that Ahmad was alone in this. He made bad connections.”

Rahami, 28, is accused of planting two bombs in New York City and several explosive devices around New Jersey.  He was captured during a dramatic shootout with police Monday in Linden, N.J., and now is recovering in a hospital while being held on a $5.2 million bail.

Jaime Reyes, owner of “Sonia’s Beauty Color Express” in Elizabeth, just doors away from the Rahami family-owned chicken restaurant operated by the accused bomber’s father, said the family lived above the restaurant and had “eight children, five boys and three girls.”

In public records reviewed by Fox, the father, Mohammad Rahami said he separated from his wife Najiba in 2005, but Reyes told Fox that he saw her living at the residence “all the time.”

As for Ahmad, Reyes said “he wanted to be a poet and always carried around a small book.”

He said it was unclear what Ahmad did except occasionally work at the cash register in the family restaurant.  “He was always doing different things and disappeared for long periods of time, ” Reyes added.

Reyes insisted repeatedly to Fox that Ahmad did not do the bombs single-handedly. “Knowing him for such a long time, he was not alone.”

U.S. officials noted Rahami’s several trips to Afghanistan but said he was not on any terrorist watch list.

Reyes said he last saw Ahmad two or three weeks ago and he did not know him as “bitter or a hater.”

He added that the father, Mohammad, frequently complained to him about his kids “losing their (Afghan) heritage.”

“Mohammad is very strict,” Reyes said, “and was not happy when Ahmad fathered a baby girl with a former girlfriend “who was Dominican.”  Reyes, who is of Dominican heritage himself, said he would try to console Ahmad and joke that “hey, your daughter is half-Afghan, half Dominican.”

The 53-year-old Mohammad told Reyes that he wanted all his sons to get married in Afghanistan. Reyes said the father told him recently that “Qasim is getting married now over there.”  Records reviewed by Fox indicate Qasim, another son, is about 25.

The elder Mohammad repeatedly told Reyes that he is always happy to send “his sons to Afghanistan because he would take their phones away so all they would do was pray.” In addition, Reyes said the father told him his sons would “lose weight over there.”

Reyes told Fox that Ahmad got married in Afghanistan about two or three years ago.  He added, “I’ve never met the Pakistani wife formally, but I do remember, I remember someone outside our shop pointing to a baby boy saying, “That’s Ahmad’s son.”

Published reports indicate Ahmad’s Pakistani wife, Asia Bibi Rahami, may now be in the UAE, where she was detained and undergoing questioning by U.S. authorities.

Separately, Fox has confirmed that the U.S. has requested a formal investigation of the couple by the government of Pakistan. Officials who spoke on background told Fox current relations between the two countries were “extremely delicate.”

Reyes said his salon still has not been allowed to re-open due to the ongoing investigation.